With the preseason now thankfully in the rear view mirror. The long-awaited regular season is upon us. The San Diego Chargers hit the road to play their rival Kansas City Chiefs in the first game of the 2017 season. A great test for a Chargers team that went winless in the division one year ago.

Former Chargers tight end Ladarius Green, is now a Pittsburgh Steeler and currently on their PUP list. (physically unable to perform). University of Arkansas rookie tight Hunter Henry is now the number two behind the future Hall of Famer Antonio Gates. While many outside of San Diego may not know Williams or Henry they soon will. Look for these two young men to be heavily involved throughout the course of the season.

One of San Diego’s biggest signings on offense was Travis Benjamin, recently of the Cleveland Browns. Benjamin runs a 4.3 second 40-yard dash and provides speed we’ve never had in San Diego at wideout. Most likely tasked with being wide receiver four and possibly in the slot is 3rd year wideout Dontrelle Inman. Not overly flashy but most times clutch. An unfortunate injury to third string running back Branden Oliver during week three of the preseason, gave way to one of three waiver pick ups. Most notably running back Andre Williams formerly of the New York Giants. I have a good feeling about this Williams as well.

Danny Woodhead, Keenan Allen and the aforementioned Antonio Gates return for the 2016 campaign. Philip Rivers should have no problem spreading the ball around this season. The center position has also been upgraded with free-agent signing of Matt Slauson formerly of the Chicago Bears. Slauson has already received the vote of confidence from future Charger Hall of Fame Ex Center, Nick Hardwick. 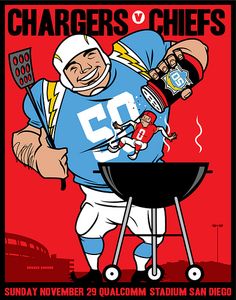 The rest of the 2015 O-line returns in 2016. D.J. Fluker has been the only name recently listed on the injury report on the O-line. Fluker has had two weeks or more off of his injured ankle to be ready for this Sunday. What many in San Diego hope to be the future center, Max Tuerk out of USC should be provided with ample time to learn behind Slauson. While there is plenty of positive news for the Chargers, the offensive line must stay healthy for any real success. Philip Rivers does so much with so little. One can only imagine what number 17 can do with this group if protected.

Keenan Allen– Perhaps the poor man’s wide receiver in me or just good old 20/13 vision. All jokes aside, we all saw the numbers he put up in half a season last year. 67 rec, 725 yards  and four touchdowns. This is a man on a mission, a man out to prove he is slept on and one of the leagues best receivers.

Danny Woodhead– The human pinball machine is one of the team leaders. Philip Rivers safety net is always a threat to make something happen.

Antonio Gates- Eight TD’s away from the all-time record for a tight end. Gates plays basketball on the football field as he always finds the soft zone and makes Rivers job easier.

Melvin Gordon, Hunter Henry & Tyrell Williams are the new kids on the block and should benefit from Allen, Woodhead and Gates being focal points most weeks. I don’t know that it’s going to be easy for Kansas City or for most teams once this team gets rolling offensively.

Kansas City hasn’t changed a whole lot from a year ago. After after starting 1-5 and finishing with 10 straight wins and a playoff berth…. why change? Kansas City made quick work of the Houston Texans 30-0, overcoming years of disappointing one and dones in the postseason. The following week in the second round of the playoffs Kansas City lost 27-20 to New England. Fast forward to 2016 and many consider Kansas as arguably the favorite in the AFC West.

Alex Smith long seen as a game manager, took huge steps towards respect and silenced many of his skeptics in 2015. After throwing one interception week three versus the Green Bay Packers, Smith didn’t throw another interception until Week 14. Smith also rushed for 498 yards, the most by any Kansas City quarterback in franchise history. The Chargers traditionally have struggled versus mobile quarterbacks. Alex Smith is very conservative or shall we say smart with the ball. Smith has no problem taking off and running if needed, extending plays.

Jeremy Maclin was the deep threat that this team lacked. Maclin had 87 receptions and eight touchdowns in 2015. He made long-time former Chief Dwayne Bowe, a distant memory one year after Smith threw zero touchdowns to wide receivers in 2014.

Travis Kelce The fourth your tight end put together his best season as a pro. I don’t believe we’ve seen the best of him yet..scary thought. He played a full 16 games with 72 receptions 875 yards and five touchdowns. The Chargers struggle against tight ends traditionally. Kelce is no exception and must be contained if not completely stopped.

Tamba Hali is still recovering from an off-season knee injury. Like Jamal Charles he may play, but his status remains unclear. Hali is an 11-year veteran with a high motor.

Marcus Peters The second your corner back had 26 passes defended in 2015. A franchise record for Kansas City.

Ron Parker The fourth-year safety had five sacks in 2015. Seven for his career since starting in 2013 for KC.

Former Chief’s cornerback Sean Smith, now with the Oakland Raiders absence along with injuries to Houston and Muaga, may be a blessing in disguise for the Chargers. I believe getting Kansas City in week one, will bode well for San Diego. I don’t believe many are giving the Chargers a chance. I like the underdog role for this team. It’s often better to be the hunter than the hunted.

The Secondary now features nine-year veteran free safety Dwight Lowery. Longtime free safety Eric Weddle & his beard are now in Baltimore. 6’4 Undrafted CFL free agent Dexter McCoil joins Adrian Phillips and Darrell Stuckey at safety as well. Brandon Mebane stabilizes the defensive line at nose tackle and brings leadership to an otherwise young team. Joey Bosa, doubtful for week 1 after his six-week rookie holdout, will also be on the defensive line. We can only hope sooner than later. Two additional late waiver pickups DB Pierre Desir and DE Caraun Reid, add depth to the defensive line and secondary. Desir was released by Cleveland and Reid by Detroit. Both players are in their third years respectively and should see plenty of snaps in 2016.

Manti Te’o Recently named as a Captain on defense. Manti looks and sounds like a player ready to take the next step. I am proud of this young man. This year he puts it all together.

Melvin Ingram 10 1/2 sacks a year ago. A slimmed down and highly motivated Melvin Ingram is primed for a solid 2016

Denzel Perryman  As advertised from his time in the University of Miami, when this man hits you, you are stood up and go down. There is a definite chemistry between he and Teo.

Corey Liuget This man loves the game of football. Corey’s had to play nearly alone up front for quite sometime. Brandon Mebane with the emergence of Darius Philon in place of Joey Bosa, has the D-line on the attack.

Jaheleel Addae The new number 37, the modern-day hitman. He has big shoes to fill. I believe he’s up to it. I expect much more physicality in the back-end of the secondary.

Jason Verrett is already recognized as one of the top cornerbacks in the league and if he stays healthy he will become more widely known throughout the league.

Casey Hayward The former Green Bay Packer and fifth year cornerback strengthens the San Diego secondary. I suppose if Flowers struggles Hayward could be moved up. I’m the eternal optimist so, I’d rather just have strength in numbers.

Not really my thing, but I have been tasked with a final score. The San Diego Chargers head to Kansas City for a 16-13 victory over the favored Kansas City Chiefs. The Chargers overcome a Lambo extra point that hits off of the left upright to hold off KC by three.