In the 49-year existence of the San Diego Padres, there have been many moments that could have worked out better for the franchise. Here is a look at the top five “what if” moments in the history of the Padres.

Every team and fan base has them. The dreaded “what if” scenarios. The plays, individuals, or situations that left fans with mouths gaped open, in the pose of the surrender cobra. Or sometimes they go unnoticed for years until one day you look back and realize what could have been.

What if the Seahawks ran the ball from the one-yard line in Super Bowl XLIX against the Patriots? What if one of the 21 teams selected Mike Trout before the Angels did (including the Padres, who took Donovan Tate at third overall) the 2009 draft? What if the 1994 strike never happened? What if Bo Jackson never got hurt?

Are these questions healthy to ask ourselves? Maybe not. History cannot be changed. It doesn’t stop us from letting our imaginations run wild, however. Indulge me here for a few minutes as we look into the top five “what ifs” in San Diego Padres history.

What if the Indians beat the Yankees in the 1998 ALCS?

The 1998 New York Yankees are one of the best teams ever assembled as they won 114 games and swept the Padres in the World Series. But what if the Cleveland Indians upset the Bronx Bombers in the ALCS that season? The Indians had won 89 games and beat the Red Sox in the Division Series. The Indians actually had a two games to one lead in the series against the Yankees, with Game 3 being won by none other than Bartolo Colon for the Tribe.

Game 4 was in Cleveland, with the city feeling good about that 2-1 series lead. Unfortunately, “El Duque” Orlando Hernandez pitched for the Yanks and shut the party down with seven shutout innings, propelling New York to a 4-0 win and eventually two more wins to clinch the pennant. But what if the Indians had gotten to Hernandez that night? What if they had ridden that momentum into a World Series date with the Padres?

I am absolutely convinced that had the Padres faced any other American League team in the World Series that year instead of the buzz-saw that was those Yanks, there would be a championship banner from 1998 hanging at Petco Park. Think about it. The Padres had just defeated two of the greatest teams of that decade, the Astros and Braves, who both won over 100 games. After that, how hard would it have been for the Padres to beat the 89-win Indians to run a parade down downtown San Diego? The National League was clearly the deeper league and the Padres navigated through it beautifully on their way to the Fall Classic. Had there been an upset in the ALCS, the Padres would have been champions. 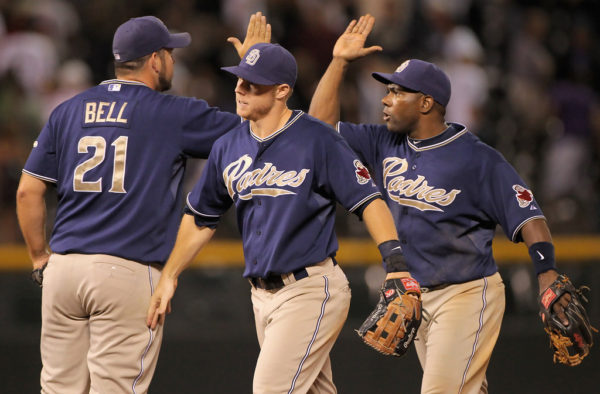 What if the Padres held onto the division in 2010?

2010 was a really fun time to be a Padres fan. There were no expectations. However, the Friars finished the first half 51-37, with a two-game lead on the Dodgers and Rockies heading into the All-Star break. By late August, their lead had ballooned to 6 1/2 games, but over the surging Giants. Entering September, San Diego had a four-game lead at 76-55. People were feeling good in San Diego. Mat Latos was pitching lights out, Adrian Gonzalez was hitting bombs, and Heath Bell was slamming the door.

And then it all came crashing down. This was the year the Giants began their even-year dynasty run, winning championships in 2010, 2012 and 2014. This particular year, it was at the expense of the Padres. With just eight games left in the season, on September 26, the Padres fell to the Reds and relinquished the division lead to the Giants. Funny enough, the Padres and Giants played the last series of the season, with the Giants leading by three games. The Padres actually won the first two before falling in the season finale, completing the collapse. The Giants, of course, went on to defeat the Texas Rangers in the World Series.

What if the Padres had clung to that division lead and gotten into the playoffs? That year was wide open. The Philadelphia Phillies seemed to be the biggest threat, coming off of a back-to-back World Series appearances and one title. The Padres would have drawn the Braves as the Giants did. They could have recaptured their 1998 magic to beat the Braves and face the Phillies in the NLCS. Could they have beaten the Phillies? Maybe not. The Giants just seemed to have their number but Philadelphia was a darn good team. It’s tough to say the Padres would have beaten them since they went 2-5 against them in the regular season. But who knows? That was a weird, wacky playoff and anything could have happened. It would have been fun to put the Padres in that field and see how far they could have gone.

What if the Padres actually helped Khalil Greene instead of giving up on him?

Khalil Greene was one of the most exciting players the Padres have ever had. He was a shortstop that could hit for power (27 homers in 2007) and flash the leather that was routinely on Sports Center. A cornerstone shortstop had eluded the Padres since Garry Templeton was traded in 1991. In the years Khalil Greene was the everyday shortstop, from 2004 to 2008, there was not a worry in the world about that position.

Greene’s 2007 season was maybe the best any Padres shortstop has ever had. As mentioned, he smacked 27 home runs with 97 RBI in 153 games along with +8 Defensive Runs Saved at the most crucial defensive position outside of catcher. He was 27 years old, still right in the middle of his prime.

Unfortunately, his career was derailed by a social anxiety disorder. In 2008, he declined heavily, batting .213 with just eight homers before being traded to the Cardinals after the season, and it got worse from there. With how society is today, with mental health fully in the spotlight and not hiding in a dark corner, something could have been done. It’s amazing the amount of resources teams have to aid their players in development, including psychological resources. It seems the Padres just gave up on him instead of dealing with the issue head-on.

What if the Padres made a concerted effort to help Greene? He was one of the most exciting shortstops in the game. What if he maintained his mid-2000’s success into 2010 when the Padres had that epic collapse? What if Greene could have been there to save them from that instead of relying on an aging Miguel Tejada and a still immature Everth Cabrera?

Greene had perennial All-Star talent. This is not meant to pile on the poor guy. If anything, it was the Padres who gave up on him. The Padres are still looking for that franchise shortstop that really has not been there since Greene left. The Padres would have had to re-sign him shortly after the 2009 season, but he would have been worth it had he maintained his success. He maybe could have played through 2011 or 2012 and helped the Padres immensely.

Native of Escondido, CA. Lived in San Diego area for 20 years. Padres fan since childhood (mid-90s). I have been writing since 2014. I currently live near Seattle, WA and am married to a Seattle sports girl. I wore #19 on my high school baseball team for Tony Gwynn. I am a stats and sports history nerd. I attended BYU on the Idaho campus. I also love Star Wars.
Tags: 1998 Padres, Adrian Gonzalez Padres, Padres History, Padres What Ifs, San Diego Padres, Tony Gwynn
Pages: 1 2

The biggest one you left out was trading Ozzie Smith for Garry Templeton. At the time it seemed no worse than even but they traded when one the best shortstops ever for one who turned out to be a below average player.

There is likely no division crown in 1996 nor a National League pennant in 1998 without Gwynn. I don’t know what you were watching, but Caminiti was clearly the leader and catalyst of those teams. Gwynn was a role player at that point in his career. As great a contact hitter that Gwynn was he was basically a singles hitter. No disrespect but Gwynn never carried the team as some suggest.

What if Kevin Towers drafted best available and not by signability.

What if Bug Selig didn’t allow an owner to purchase the team on a 5 year payment plan only to rip the team from him in the 4th year and give it back to the previous owner.

What if Jeff Moorad didn’t need his guy Josh Byrnes and Jed Hoyer/Jason McLeod were able to build their vision.

What if the Padres didn’t draft Matt Bush in 2004? Epic bust, and a predictable one at that. And the guy who went second had a decent career…

Interesting piece, Nick. Definitely a lot of scenarios to wonder about. I do think it is a bit presumptuous to assume the Padres did not try to help Khalil Greene.