Why did the San Diego Padres sign veteran infielder Ian Kinsler to a two-year deal this winter? His skills have clearly declined, but can the right-handed hitter be useful for the Padres in 2019 and beyond?

Recently the Padres signed Ian Kinsler to a two-year deal worth $8 million, with a club option for the 2021 season.

We know that much, but what we don’t fully understand is why Kinsler struggled during the second half of the 2018 season.

It would be easy to simply say that he is 36 now, and declining due to age. Yet his drop off in performance has been more nuanced than that, and specifically related to his hitting.

On defense, Kinsler rated out very well according to multiple metrics. Beginning the year with the Angels, Kinsler was highly productive.

However, after his trade to the Red Sox, his hitting declined significantly:

He struck out significantly more often during his tenure with the Red Sox, comparatively with his impressively low strikeout rate with the Angels. Clearly, his production was down after being traded, and we need to understand why that happened.

Kinsler has struggled to hit high-velocity Fastballs, as Statcast indicates that he only had fourteen base hits versus 95+ mph pitches in 2018. With today’s game of high-octane velocity that continues to become more common, this will only become more of an issue for the veteran second baseman. He also struggled against offspeed pitches, though — Only managing thirteen hits on such pitches throughout the year. His thirty-two base knocks versus breaking balls were more than he mustered against 95+ mph fastball and offspeed pitches combined!

As a player who will likely be a pinch hitter for manager Andy Green, late-inning relievers facing him will be able to blow fastballs by him, whom they will know has little track record of hitting high-velocity pitches. Further exacerbating his issues, is the fact that Kinsler only hit for power last season when pulling pitches. Take a look at his spray chart of hits last season: 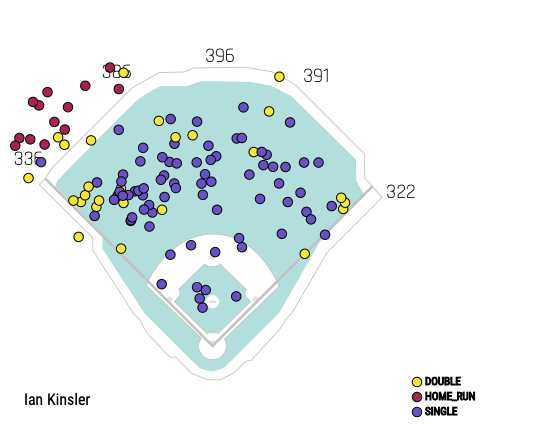 The majority of his hits were to left field, comprising 43.7% of Kinsler’s batted balls. This means that pitching away to Kinsler should be a highly viable strategy for pitchers facing him. This is concerning for his future because a significant portion of his previous success as a hitter was reliant upon his home-run hitting abilities. He hit a combined 50 home runs for the Tigers during the 2016-17 seasons, putting up a combined 7.9 WAR according to Fangraphs. Last season, he only managed to hit fourteen combined homers, thirteen of which he hit while playing for the Angels during the first half of the season.

Although his defense was positively rated throughout the entire 2018 season, various metrics rated his defense as having declined following his trade to the Red Sox. We can first find out about more specific reasons for his lesser defensive performance, by looking at specific metrics and comparing them side by side. To see if Kinsler’s quality of play in the field decreased, we’ll also compare the same numbers side-by-side from his time with the Angels and Red Sox separately:

So it’s clear that Kinsler was noticeably worse defensively, after being traded to Boston. Let’s get into how these metrics are used and what they are measuring so that we are on the same page. ‘UZR’ stands for Ultimate Zone Rating, and is a number that gives you an idea of how often Kinsler fielded balls and recorded outs, relative to the number of defensive chances he had. ‘Def’ is FanGraphs’ all-encompassing fielding metric, that uses a positional adjustment to account for a player’s defensive value.

Finally, ‘FRAA’ is calculated by Baseball Prospectus, and is determined more based on how many plays Kinsler makes, relative to the number of plays the average second baseman completes. So there are three different metrics saying that Kinsler saw a drop in performance in the field last year, pointing to the fact that he did indeed struggle in an area of his game that he typically excels in.

Perhaps there is something to be found in Kinsler’s defensive positioning? Let’s look at the Statcast data regarding that, to see if it provides an explanation as to why he struggled with the glove late last year. Here’s a chart showing where Kinsler positioned himself last season, relative to other second basemen: 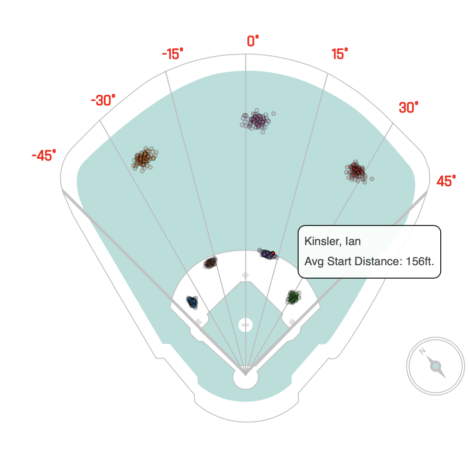 Kinsler positions himself at an average distance of 156 feet from home plate, which as we can see is deeper than the average second baseman. He is the small red dot we see in the upper-right corner of the dots representing those who play at the keystone, which also illustrates that his positioning in 2018 was unique to Kinsler.

Interestingly, his distance from home plate in his positioning was an average of 156 feet with both the Angels and Red Sox. This shouldn’t have affected his defense, because it didn’t change. What did change was his horizontal positioning, which is indicated by the degree readings on the chart above. He was positioned at an average of nine degrees with the Red Sox, compared to 12 degrees horizontally with the Angels. In other words, Kinsler played closer to second base with Boston and was comparatively worse in the field as a result.

It is clear that Ian Kinsler is not the same player he used to be, and the Padres surely realize this. Yet his decline has been more significant than most people seem to realize, and the data above supports such an argument. If he wants to even be a bench player on the Padres next season, Kinsler will certainly have to improve his hitting. Considering his woes against hard fastballs, and on defense, there may not be much more than mentoring for Kinsler to help out with for the Padres in 2019.

A sophomore at Willamette University in Oregon, Conrad is majoring in Spanish but is also a writing center assistant for other students at Willamette. He has been a Padres die-hard his whole life and hopes to bring comprehensible statistical analysis to the site.
Tags: 2019 Padres, Ian Kinsler, Ian Kinsler Padres, Padres Ian Kinsler, San Diego Padres

Good numeric analysis.
Maybe the front office should contact you before they sign ageing stars to multi year contracts

Thank you, I am glad you liked my article!