I’ve been going to Petco Park since it opened in 2004 and it’s been incredible to see it’s transformation as well as the area surrounding Petco. Beginning on June 1st, the Padres welcome a lengthy home stand (barring a quick road trip to COL for three games 10th-12th) featuring the Mariners, Rockies, Braves, Marlins, and Nationals which lasts until June 19th. I challenge anyone planning on going to those games to seek out something new about Petco Park that you haven’t noticed before.

I recently set out to do this at a game against the Rockies earlier in the 2015 season, and did find new areas of Petco that I haven’t ventured to before, which was nice. Although it was what I didn’t see that game that proved to be a more enlightening experience leaving the game.

In 2007, the Padres unveiled the amazing statue of the sweet swinging Tony Gwynn overseeing the game from the Park at the Park. That statue is a true landmark of Petco Park and I would go even further to say a landmark of San Diego. (Credit for YouTube video: Carl Starrett)

Come back with me to that one meaningless game against the Rockies a year ago. As the game was meddling along, I was just staring out to the Park at the Park and realized there is no lighting whatsoever shined down or vice versa on Tony’s statue at the park. Nothing. Zip.

How is this still a thing?

How difficult would it be to set up a simple lighting setup that shone down on Tony’s statue during night games so that fans can see his statue from their seats?

Clearly from this picture that I took at a recent game against the Dodgers, I believe, there is no indication of Tony looking down on the game from his location on top of the Park at the Park.

I mean if you look at these particular screenshots of MLB The Show, it is apparent that it just seemed like a given to light up Tony’s statue out at the park. San Diego Studios knows what’s up. 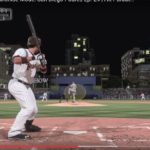 The only possible thing that I can think of that would hinder this process is that illuminating the statue would be an interference with the hitter’s vision in the batter’s eye. Honestly though? If someone can shine an SF neon light in their apartment window outside of Petco Park, I think we can afford to throw down some LEDs near Tony’s statue or even it’s own lighting setup would be fantastic.

So, when you’re out at Petco Park during the summer I encourage you to look out at Park at the Park and realize how dark and empty that space is during night games, and how a simple lighting setup could bring a completely new dimension to the already fantastic Petco Park.

As Tony looks down on us, we should be able to see him out at the Park. Kids can look out to the Park and ask their parents or older siblings about the statue of the man with the prettiest swing in all of baseball and most importantly, how he became a fixture and hero within the San Diego community.

We all miss Tony. I think this minor lighting setup suggestion could carry on his legacy even more.

Hopefully a lighting setup for Tony’s statue is in the works at Petco Park, hopefully by the All Star Game we can have Tony’s statue lit up for the entire world to see come Mid July.

Correspondent for East Village Times. Undergraduate at University of Southern California's School of Cinematic Arts receiving a degree in Cinema and Media Studies with an Emphasis in Directing Film and Television. Have been watching and playing baseball my whole life and consider the Padres apart of my everyday routine.
Tags: Padres, Petco Park, San Diego Padres, Tony Gwynn, Tony Gwynn Statue