Tuesday August 16th presents an opportunity to attend joint practices with the Arizona Cardinals. The practices are from 6pm-8pm, at Qualcomm Stadium. The most important factor is of course that no injuries occur to either club. Second being quality work against another team at full speed. The whole event will be eventful, that is for sure.

Carson Palmer had an incredible 2015 season. He threw for 4,671 yards 35 touchdowns and 11 interceptions in 16 games. Palmer suffered an ACL injury, that ended 2014 through six games but he looks fully recovered. Palmer has quite a bevy of play makers to choose from.

Starting with 13-year veteran, and soon to be Hall Of Famer Larry Fitzgerald. The wide receivers also include Michael Floyd, now a 5th year player. John Brown is a 3rd year burner who is an extremely dangerous player in the flats. He can also stretch the field with his speed. Michael Floyd (6′ 2″ 220 lbs) tends to be the most dangerous playmaker downfield. John Brown, at 5′ 11″ 179 lbs is known to do damage vertically as well. He also comes equipped with an insane end zone celebration. Please YouTube it sometime..It’s pretty good!

Larry Fitzgerald still makes many plays and can move to all wide receiver spots. There is a lesser known, Jaron Brown with decent size at 6′ 2″ 205 lbs. He is a 4th wide receiver, and a definite mismatch for small defensive backs. At Tight End, Darren Fells and Jermaine Gresham, formerly of Cincinnati..don’t scare anyone. No slight to either of them. Fells is a 3rd year player, while Gresham is a 7th year veteran.

At running back, David Johnson emerged as the eventual starter in his rookie season. David Johnson hails from Northern Iowa at 6′ 2″ 224 lbs. He can catch extremely well, and has an apparent second gear on the open field.

Veteran Chris Johnson had a career renaissance in 2015. Head coach Bruce Arians tends to favor veterans at key positions. Chris Johnson played in 11 games and started nine of Arizona’s games. He rushed for 814 yards on 196 carries and three touchdowns. The nine-year running back, most notably for the Tennessee Titans, even sported a 62 yard run in 2015. He looked re-energized being in the desert.

Fourth year running back Andre Ellington can flat-out fly. Unfortunately Ellington is injury prone. A players best ability is availability. Injuries are what opened up David Johnson’s opportunities in general. Once the team also lost Chris Johnson to injury, there was a changing of the guard. Carson Palmer, not the most fleet of foot is guarded by a solid Offensive line. It buys him time in pocket, no question. It’s what makes this Arizona offense go. Jared Veldheer, Mike Iupati, Lyle Sendlein, Ted Larson, & Bobby Massie. 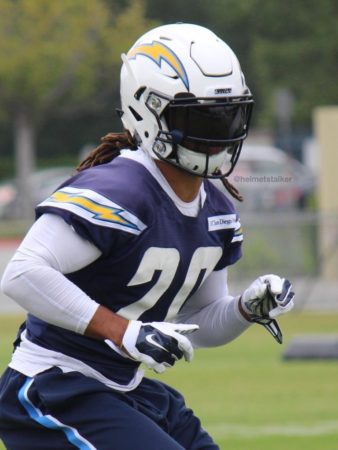 Arizona’s wide receivers against San Diego’s defensive backs. It will be good to see how the secondary fares post Eric Weddle, now a Baltimore Raven after nine years in San Diego. There is a definite youth movement throughout the Chargers defense. Casey Heyward, is listed as a nickel back currently. He appears to have the skill set to step in a larger role if needed. 9th year veteran Dwight Lowery, is a journeyman free safety. Now on his 5th team in nine seasons, has big shoes to fill.

2016 6th Rounder, punter Drew Kaser. This will be the first time since 2003, that the Chargers have fielded a punter not named Mike Scifres, now a Carolina Panther. Watch this video on Kaser. He has a monster leg.

First round draft pick defensive end Joey Bosa, please sign already! Ten-year veteran nose tackle Brandon Mebane will hopefully solidify the middle of the defensive line. Will Joey Bosa, often compared to J.J. Watt, be the star we all hope to see? Can Brandon Mebane, longtime nose tackle recently signed from Seattle, bring his Super Bowl pedigree and experience to the defensive line? Brandon Mebane was a member of the 2013 & 2014 Super Bowl Seahawks teams. Corey Liuget should benefit from play makers on the line in 2016. Already quite the play maker as is, 2016 will be even greater as far as production for him.

Arizona’s running backs, and the maturation of the Chargers linebackers. As I wrote about in a prior article, these young men gelled late in 2015. Depth was added with rookies Joshua Perry & Jatavis Brown in the draft. The return of veteran linebacker Tourek Williams, a 4th year player is also big. While we have no idea how much or how hard running backs will be running against this group, it should be fun to watch.

Look for Part 2 of this article very soon here at EVT. Thanks for reading.