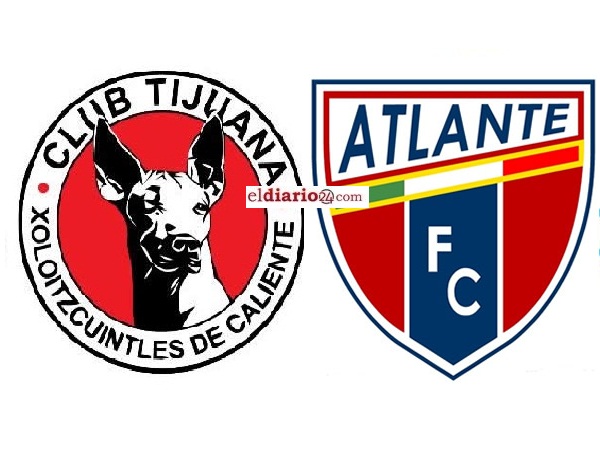 The Tijuana Xolos are currently living a nightmare in the initial stages under new manager Eduardo Coudet, but will travel to the paradise, Cancun, to face second division side Atlante in the Copa MX. The border city side has only scored one goal and won one game in competitive games under Eduardo Coudet. That lone win came in week 2 of the Copa MX against Puebla at the Estadio Caliente. Paul Arriola scored the lone goal of the match that gave Club Tijuana the three points. In the Liga MX, Club Tijuana has not scored in 270 minutes of play and is coming off a tough 3-0 loss against Monterrey at home.

The team has had several structural issues and has struggled to create scoring opportunities under the leadership of “Chacho” Coudet. It is unclear how the team will keep on performing with the Argentine at the helm, but there are two very winnable games this week against Atlante in the Copa MX and against Puebla in the Liga MX. Both games should be won comfortably by the Aztec Canines and serious questions will need to be asked if both of these games are not won.

Coudet presented a formidable lineup against Puebla at home and should do the same in this matchup against Atlante. Some of the more notable players that featured in that game against Puebla that could play in this game include Paul Arriola, Damian Perez, Ignacio Malcorra, and Gustavo Bou. While these players are not guaranteed to start, some of the more likely players that could be seen in this game include Jose Antonio Rodriguez, Alejandro Donatti, Alejandro Guido, and Enzo Kalinski. These players could potentially feature in Liga MX games going forward with Eduardo Coudet still looking for his ideal starting 11. The Xolos should win this game comfortably, even playing away from home in the intense heat of Cancun.

Atlante is one of the more historic teams in Mexican soccer with a history dating back over a century, but has not played in the top circuit of Mexican soccer since 2014. Los Potros are currently doing well in the Ascenso MX with six points, but lost their first game in the Copa MX competition against Puebla 1-0 away from home. The team from Cancun will be anxious to get their first three points in the Copa MX, but will face a much stronger Xolos’ side. Atlante has amazing leadership with experienced Mexican manager Raul Gutierrez at the helm. “El Potro” managed the Mexico U-17 national team and led the youngsters to a U-17 World Cup title back in 2011. Los Azulgranas do not have many notable players on their squad. Among the most revered is the midfielder Alan Zamora, who served as the club captain in the Copa MX game against Puebla. Zamora was part of the Apertura 2007 Atlante team that won a Liga MX title and is one of the more experienced players on the roster. His free-kick ability may also be a key factor in the game as he is very skillful from set pieces. The home field advantage could also be a factor in Cancun, but it should still not be enough for Atlante to get any points from the game.

The Mexican goalkeeper had at least three crucial saves in the Copa MX game against Puebla and was the man of the match from that encounter. “Tono” deserved a starting role in net in the Liga MX based on his impressive performance and should be the man in net for this game. The 24-year-old can still earn a starting role, and with the current state of the team, many people would prefer to see Rodriguez between the sticks rather than Gibran Lajud.

The Chula Vista native had a very impressive preseason, scoring two goals against FC Juarez in one of the preseason games. Since then Guido has not looked the same, but has still provided some solid performances in the Liga MX and more notably the Copa MX. The American midfielder is one of the several midfielders who is fighting for a starting role in Liga MX games and it will be interesting to see how he does in this game and if he can go back to that tremendous form he had in the preseason.

The Xolos are currently one of the more struggling teams in the Liga MX, with no goals and no wins. In the Copa MX, the border city side has found a way to win and will look to continue that form heading into this encounter in Cancun. Eduardo Coudet will still present a potent lineup even if not a lot of the key starters get a start in this game. Some consistent starters are expected to feature in this game and the Xolos should get a comfortable win at the Estadio Andres Quintana Roo. The prediction for this match is a dominant 2-0 win for Club Tijuana against the second division team, with a powerful performance by Jose Antonio Rodriguez in net. The match should be an entertaining duel and the Xolos should offer another solid performance in the Copa MX.

Francisco, 21, Chula Vista area, Journalism student at Southwestern College. I have been a Padres fan all my life, did most of the series previews and recaps in the Padres' 2016 season for EVT. Now I focus more on the Tijuana Xolos soccer team, get press passes for every home game and write consistently about the team for EVT.
Tags: Eduardo Coudet, Liga MX, Tijuana Xolos, Xolos Soccer, Xolos vs Atlante

Padres acquire Jorge Mateo from Oakland in exchange for a PTBNL

The impacts of a 60-game season for the Padres