The Tijuana Xolos played their second game in the Apertura 2017 edition of the Copa MX this Tuesday, August 8.

The border city side visited the tourist venue of Cancun to play second division Atlante at the Estadio Andres Quintana Roo. The stadium, which seats 17,289 spectators, drew a minuscule crowd for the game of just 1,425 spectators. The atmosphere was intimate in Cancun with the small crowd, and the Xolos were looking for their second consecutive win in the Copa MX.

Eduardo Coudet went with a 4-2-3-1 formation for the game which he had not used before this season. Antonio Rodriguez was in net, with the back four comprised of Matias Aguirregaray, Alejandro Donatti, Hiram Munoz, and the club captain for the game, Juan Carlos Nunez. The two holding midfielders were Alejandro Guido and Enzo Kalinski. Luis Chavez and Luis Angel Mendoza played out on the wings with Matias Pisano playing in behind the lone striker, Juan Martin Lucero.

The starting lineup was a solid one, especially coming up against a much weaker opponent in this encounter. The main talking points from the starting 11 were Luis Angel Mendoza and Juan Carlos Nunez starting in their first game under Eduardo Coudet. The inclusion of Matias Aguirregaray was also interesting and raises questions whether the Uruguayan defender will play in Friday’s Liga MX game against Puebla.

The Xolos were the dominant team for most of the encounter. The first goal of the game came early, in the 25th minute. A potent pass from Matias Pisano found “Quick” Mendoza on the edge of Atlante’s penalty box on the left-hand side. Mendoza worked his magic and delivered a beautiful backheel pass that found Juan Martin Lucero inside of the penalty area. The Argentine released a powerful shot that made its way in front of three defenders and the goalkeeper to the top right-hand corner of the net. The play was one of the most beautifully constructed plays for Club Tijuana in the era under Eduardo Coudet and featured bench players like Pisano and Mendoza in it. The Xolos took the early lead and controlled the game from there, but a huge momentum shift occurred in the 44th minute of the encounter just before half time.

Luis Angel Mendoza went from a hero to a villain for the border city side as he received a red card after an aerial clash with an Atlante player. There was contact from Mendoza’s shoulder to the opposing player, but referee Adalid Maganda made a controversial decision that went on to affect the outcome of the game. 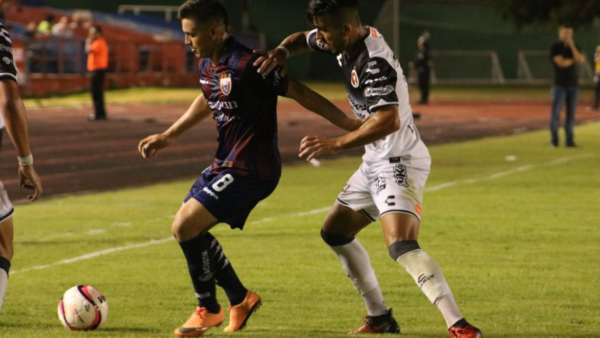 The Aztec Canines still had good control of the game up until the final third of the game. Matias Aguirregaray was putting in a shift in that right-back slot, fighting for every ball and really being the focal point of the back line. Eduardo Coudet opted to defend his slim lead, which is contradictory of his intended style of play, even with a man down. In the 69th minute, Coudet replaced Juan Martin Lucero with Henry Martin and in the 72nd minute, the Argentine boss took out the midfielder Luis Chavez for the defender Juan Carlos Valenzuela.

“El Chacho” was really trying to maintain his slim lead, which is a tactic that did not pay off. Coudet’s final substitution came in the 82nd minute, taking off Matias Pisano for 19-year-old Cesar Crespo. Atlante really pressed the Xolos’ defense in the final 10 minutes of the game but could not get the ball in the back of the net. When the 90 minutes were up, a surprising five minutes were added to the Xolos and Eduardo Coudet’s despair.

The back line was fatigued from the intense game and the humidity of the Cancun air, especially in the final moments of the game. Off a cross by Atlante, Juan Carlos Nunez made a fatal error when trying to clear the ball and ended up smashing the post of his own net. Carlos Cauich was there to tap in the ball and give Atlante the point from the game, and the few fans at the Andres Quintana Roo some excitement and joy. There were several positives to take from the game as there were players that stood out and had solid performances. But overall, the team did not look much better than it did against Puebla in the first Copa MX game, and this time was unable to achieve the favorable result. Eduardo Coudet has continued to deliver disappointing performances and will now play a must-win game for the border city side this Friday against Puebla away from home in the fourth week of the Liga MX.

Grisham and Padres enjoying exciting 2020 start with room to grow