The San Diego Padres are still in dire need of help in the outfield. Here are three possibilities and the potential price of each of them.

The Padres swung a trade for former Yankees slugger Luke Voit. While that helps solve the lack of power in the middle of the lineup, he does not resolve matters regarding the outfield situation.

As it stands now, Trent Grisham and Wil Myers are the assumed starting center fielder and right fielder respectively. The only other outfielder listed on the Padres’ 40-man roster is Jurickson Profar, who didn’t play much outfield at all until 2020. Plus, his numbers at the plate in 2021 were less than stellar- a .227 average, .320 slugging, .649 OPS, and 83 OPS+.

Looking at the Padres on paper, it’s fairly obvious to see their glaring need. While many free agent outfielders have signed and a few have swapped locations in trades, options still remain for the Padres to upgrade in left field, be it via free agency or trade.

Here are three potential upgrades in left field and what it may cost to acquire them.

The biggest attraction is he offers pop and contact skills from the left side of the plate, something in which San Diego is not particularly deep. His plate discipline would be a big boost, as his 12.3 percent walk rate last season would have been second on the squad. 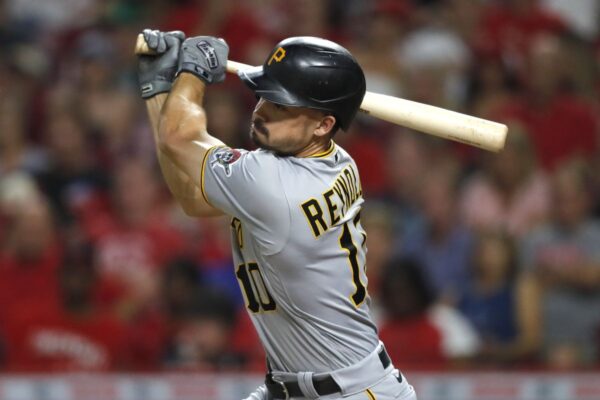 Price-wise, Conforto rejected the Mets’ one-year, $18.4 million qualifying offer before the lockout. Nick Castellanos just got $100 million over five years with the Phillies. Something hovering around his qualifying offer number over multiple years would likely get it done. He is not yet 30 years old and is from the West Coast. It seems like a fit, and perhaps an offer of 3 years for $55 million would get the job done. FanGraphs’ Dan Szymborski penned him for a two-year, $35 million contract last month.

The Rays and Padres should be very familiar with each other by now. Blake Snell, Jake Cronenworth, Emilio Pagan, and current free agent Tommy Pham all came to San Diego by way of Tampa in the last two seasons. The Rays certainly would not just give Meadows away cheaply. He is not yet 27 years old and was an All-Star in 2019. Since the beginning of that All-Star season, he owns a solid 126 OPS+ along with a .828 OPS. He might get even better.

In 148 career games in left field, he has three Defensive Runs Saved and played significant time at all three outfield positions. While he isn’t stellar at any particular aspect of the game, there is also no glaring weakness. He can hit for some power from the left side, drive the ball to all fields, run the bases with some athleticism, and play slightly above-average defense.

Given his age and the fact that he is under contract for three more seasons, it will take some decent prospects to pry him from Tampa Bay. It may take a player like Joshua Mears and another lower-level prospect or two.

If any team is in sell mode to start out the year, it should be the Pirates. Of the three left fielders mentioned, Reynolds had the best 2021 season. In 159 games, he hit .302 with a stellar .390 on-base percentage, which was fifth in all the league among qualified hitters. He simply knows how to get on base, and now he also appears to have found another gear with his power, hitting 24 homers last year.

His on-base prowess, contact-hitting skills, plus average defense in left field led to a stellar 6.0 WAR last season, which was 13th in the big leagues and better than 2021 NL MVP Bryce Harper’s 5.9 mark.

The fact that he is coming off of a breakout, All-Star level campaign at just 27 years old with four more seasons of team control suggests his price will be high. It might even cost the Padres one of CJ Abrams or Robert Hassell III plus some secondary prospects. However, in return, the Padres, who are in win-now mode, get a switch hitter in left field who is averaging nearly 5.0 WAR per 162 games.

Native of Escondido, CA. Lived in San Diego area for 20 years. Padres fan since childhood (mid-90s). I have been writing since 2014. I currently live near Seattle, WA and am married to a Seattle sports girl. I wore #19 on my high school baseball team for Tony Gwynn. I am a stats and sports history nerd. I attended BYU on the Idaho campus. I also love Star Wars.
Tags: A.J. Preller, Austin Meadows, Bryan Reynolds, free agent, Michael Conforto, MLB, Padres, San Diego Padres, trade