After his second spring homer of the 2022 season, there is a buzz around Padres’ camp about CJ Abrams.

The Padres’ No.1 prospect and the No. 9 ranked in all of baseball is at full strength in Peoria and showcasing head-turning skills. Abrams has gazelle-like speed on the diamond, but his power stroke is what has generated so much excitement recently. On Sunday, Abrams slugged an opposite-field homer off Dylan File in the ninth inning in his lone at-bat in the game.

With Fernando Tatis Jr. out for at least three months with a broken wrist, there is already talk if Abrams is ready for major league service time.

The infielder has only racked up 348 plate appearances in the minor leagues since the Padres drafted him in the first-round (6th overall) of the 2019 MLB Draft out of a high school in Georgia. That is a slight concern, as traditionally, you want a young player to see somewhere around 500 at-bats in the minors before they debut. Abrams has also only played in 42 games above the A-ball level. Can he adjust to major league pitching without seeing Triple-A pitchers?

The shortstop is a great defender, and most believe his glove will play at the major league level now. That is not a worry. The biggest concern is with his bat and with his development. You really do not want to stunt the growth of a player like this.

It is still early in the spring, but let’s examine if Abrams is ready to crack the Opening Day roster for the Padres.

Yes, he is ready now

What more must you see from his bat? On Sunday, he homered for the second straight game, going to the opposite field.  Yes, there will be moments of great failure for the young hitter, but the good definitely outweighs the bad. Let him play and reap the benefits of his skill each and every day. 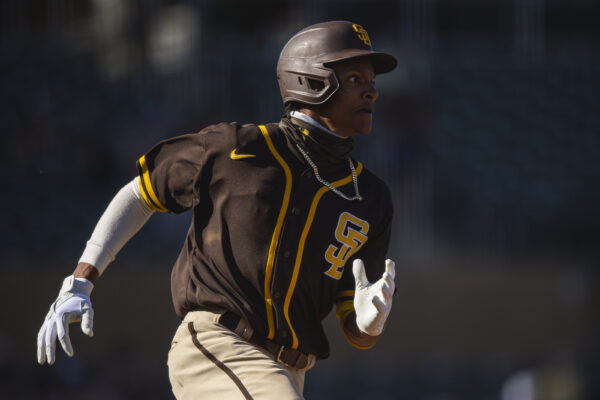 The Padres have shown they will promote highly-regarded prospects as they did with Luis Campusano and Fernando Tatis Jr. If Abrams shows maturity, the team will utilize him now, and you can expect success. If you factor in the injury to Fernando Tatis Jr., Abrams can step right into shortstop, and the Padres will lose very little excitement to their lineup. The fan base will be happy until Tatis returns.

No, he needs a few more at-bats at the upper minor league level

Under 400 at-bats is a red flag. He may have success with the bat from time to time, but the Padres cannot allow him to fail greatly at the major league level. If he is promoted and struggles mightily, the Padres may have problems with his development. Let’s face it, that is not a strong suit for this club historically.

Abrams can begin the season in Triple-A and be promoted if Ha-Seong Kim fails at the shortstop position. The Padres are invested in Kim, and he should have the first shot at playing the position virtually every day. Abrams will be there when he is needed.

The Padres will explore the possibility of Abrams breaking camp with the major league team all spring long. He is getting a very serious look right now. You may see Abrams in left field as well for the Frias as Bob Melvin assesses the young player and his value to the team now.

You get a sense that barring any major upgrades in the offense, CJ Abrams will begin the year with the Padres. Preller is still very capable of upgrading the team in several areas, so this situation is fluid. The way CJ Abrams is playing baseball, it would take an epic failure down the stretch in the spring with the bat or several offensive upgrades for him not to make this team. He is a special talent, and the Padres are naturally very eager to see him in brown at Petco Park.

2 thoughts on “The clock is ticking for Padres’ CJ Abrams”