There are rumors that the San Diego Padres are pursuing New York Yankees’ third baseman, Miguel Andujar. The Padres surely need third base help, but will the Bombers part with such a young slugger? Here is a glimpse at Andujar’s numbers in 2018.

It’s clear the San Diego Padres have a positional need at third base, and a potential player the team may target to fill that need is Miguel Andujar.

The 23-year-old manned the hot corner for the Yankees last season, playing in 149 games and hitting for a 128 wRC+. This is a statistic that measures all of his offensive value brought to the Bronx Bombers, in which hits are weighted by their value. The league average number for wRC+ is around 100, meaning that Andujar was well above league average in this regard.

This year, for example, the league had a collective wRC+ of 97. So Andújar was 31% better than the league average hitter last season, while Eric Hosmer had a wRC+ mark of 95, for example. He’s clearly gifted with the bat, and it’s what kept him in the Yankee lineup throughout the year.

Despite his positives on the offensive side of the ball, the young third baseman played horrible defense at third base.

Considering that the Yankees have championship expectations for 2019 and beyond, they aren’t exactly feeling patient with Andújar’s defensive abilities. From the Padres’ perspective, they would be happy to work with Andújar on his defense and put his bat in their unimpressive lineup. A recent report confirmed this possibility on Twitter:

Before getting into the details surrounding Andújar’s defense, let’s focus on his hitting. After all, despite his many mistakes in the field last season, he was still worth 2.7 fWAR.

To continue speaking of his abilities with the bat, it should be said that Franmil Reyes was the only player on the Padres who posted a higher wRC+ than Andújar in 2018, just edging him with a mark of 129. It isn’t unreasonable to say that the Yankee third baseman would instantly become the best hitter in the Padres lineup if acquired.

He is far from a perfect hitter though, as he walked in only 4.1% of his plate appearances last year. To put that in perspective, the league as a whole walked in 8.5% of all plate appearances in 2018. He did post an ISO, or isolated power mark of .230 while striking in 16% of his trips to the plate. Compared to the league this time, he excelled, as the average ISO of hitters was .161 and they struck out 22.3% of the time. Despite this high-end offensive production, we have to evaluate how much of that production was due to him playing in Yankee Stadium for half the season. 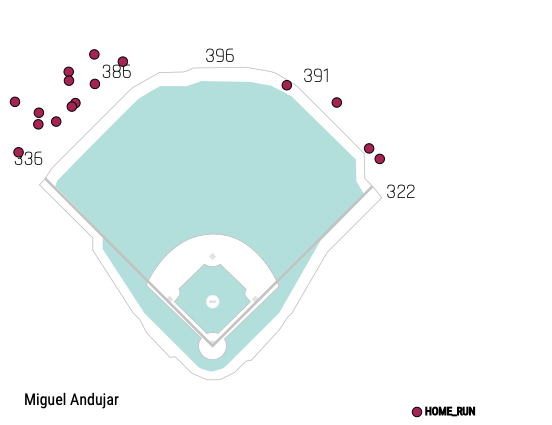 Furthermore, the average exit velocity of the home runs charted above was 102.1 mph, with the average launch angle being 29 degrees. Among all batted balls hit 102 mph last season, 59.9% of them went for hits. More specifically, batted balls hit 102 mph and at 29-degree launch angles fell for hits 82.9% of the time. Ultimately, 77.2% of balls hit at the same launch angle and exit velocity were home runs. Based on this data, we can safely conclude that Andújar’s power is for real, and plays in any park.

Considering that he hit 27 home runs last year, it is impressive that Andújar only struck out at a 16% clip last season. The other major leaguers who hit at least 27 home runs or more in 2018 struck out 17.5% of the time, which further emphasizes the quality of hitters to whom Andújar can be compared. Speaking of good company, he made contact with 91.8% of pitches he swung at in the strike zone last year, which is remarkable considering that Mike Trout did so 91.7% of the time in 2018. As a hitter with these kinds of numbers to back him up, it’s clear that Andújar’s impressive campaign last season was no fluke.

With regard to his defense, Andújar has work to do in order to be more viable as a third baseman.

On the bright side, his arm was rated as 70 on a 20-80 grade scale by the Fangraphs prospect team. If the Padres were to trade for him, he would have time during the 2019 season to work on his defense at the major league level. As the situation currently stands, the team will not be contending next season, and this would give Andújar the reps to improve defensively as necessary. Let’s be honest; we just watched the Padres trot out Wil Myers at third base, so bringing in the Yankees’ third baseman should not be an issue from a defensive standpoint. It’s also evident that the Padres’ lineup is in need of impact bats, which Andújar would certainly bring to San Diego. With a farm system rich in pitching depth, the Padres would be wise to trade for some real offensive help, in the form of Miguel Andújar.

A sophomore at Willamette University in Oregon, Conrad is majoring in Spanish but is also a writing center assistant for other students at Willamette. He has been a Padres die-hard his whole life and hopes to bring comprehensible statistical analysis to the site.
Tags: Miguel Andujar, New York Yankees, Padres Miguel Andujar, San Diego Padres, Yankees

4 thoughts on “The Numbers on Padres’ Trade Target, Miguel Andujar”