San Diego State has 581 wins in its 99 seasons of football. 110 (18.9%) of those victories have occurred since Brady Hoke was first hired in 2009. During the last 13 years, the Aztecs suffered through only one losing season, Hoke’s first year on the Mesa.

SDSU has averaged 8.5 wins a season over that past decade-plus. Understanding the futility of the program before Hoke’s first tenure puts this excellence into perspective. In the 13 years prior to 2009, the program earned only 59 victories, had two winning seasons, and never won more than eight games. Since 2009, the team is 110-56. Between the program’s Holiday Bowl appearance in 1986 to the time they hired Hoke, the team also won 110 games. During that 22-year span, the Aztecs’ record was 110-144. 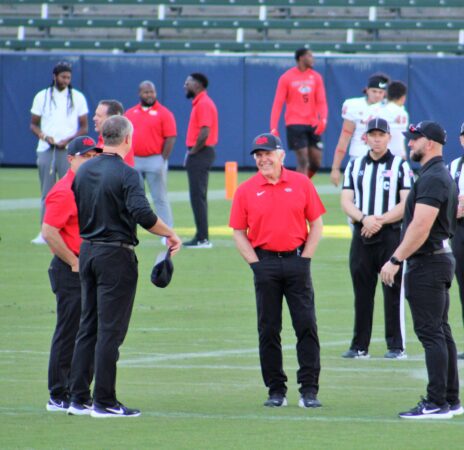 In an era where the money gap between Power 5 and Group of 5 schools has widened dramatically, how has SDSU closed the competition gap?

The answer is not surprising considering the “old-school” reputations of the men in charge of the program the past 13 seasons. While sports in America has moved towards the precision and predictability of computer analytics, the Aztecs charted their own course. They reached into the past and entrusted the human beings in their program with the success and failure of the team.

No one embodies this choice more than SDSU’s Associate Athletic Director of Strength and Conditioning, Adam Hall. In an exclusive interview for episode six of The SDSU Football Podcast, Hall detailed the program he oversees. It is as unique as the man running it.

“My history here, and the fact that I’ve been able – lucky enough, fortunate enough – to do it for 10 years,” Hall said. “I feel like there’s something that works here, and I’m not sure it would work everywhere.”

In a copycat industry where every school borrows and steals ideas from winning programs, the Aztecs have been content to carve out their own identity. This approach is exceedingly rare. Most professionals work on finding techniques that others can implement in their environments. Hall is content to pour into SDSU’s players even if no one duplicates his efforts.

His method is not without risk. When coaches follow the established path, they are less responsible for the outcomes. The point of analytics is predictability, after all. It intentionally takes decision-making away from human intuition and instinct in favor of logical, rational choices that follows where the data leads. Hall, in contrast, embraces the responsibility that comes with implementing his unique vision.

The Method to Adam Hall’s Madness

The Aztecs started winter conditioning last week. On Monday, Wednesday, and Friday, the players participate in their individual lifting groups. On Tuesdays and Thursdays, they do 6 a.m. runs. Hall’s goal is that each day, every player will leave completely spent, physically and mentally. Weights and specific exercises vary by player and position group, but the unified feeling of daily exhaustion produces togetherness and crafts a true team.

What kind of people volunteer to get completely broken down five days a week? Aztec Warriors. 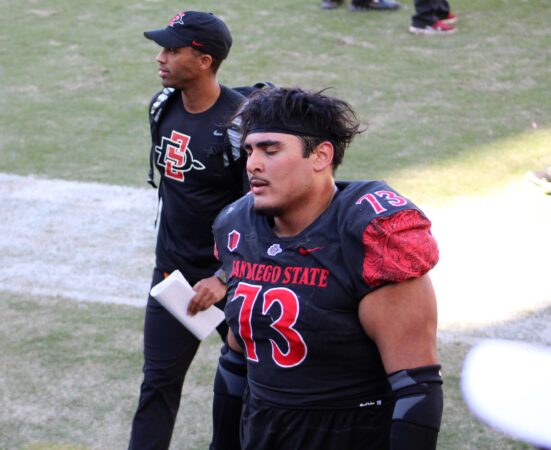 The genius to Hall’s approach is that clichés like “leaving it all out on the field” or “giving it my all” sound nice, but how is one sure he has truly given everything he has? SDSU’s players know what it feels like to pour themselves out because they have done it in Hall’s laboratory. What mental and physical exhaustion looks like is pictured to the right. Billy Dunkle is leaving the field following the Aztecs’ win over Boise State. Dunkle had nothing left to give – even to his teammates in celebration – because he had left it all out on the field.

“We tell these guys what to expect when they get here,” SDSU’s Director of Player Personnel Matt Razzano told EVT on the same podcast episode Hall appeared on. “We don’t sugar coat anything. We don’t fluff it because if you do that, once they get here and it’s different than what you told them about while you were recruiting them, that’s where things like guys entering the transfer portal happens. They were expecting one thing, and they got a whole different thing. We’re not going to sell them the dream in the recruiting portion of it, then flip the switch on them when they get here.”

Other teams and strength programs create systems where they do the same lifts and exercises on the same day every year. These systems are rigid, requiring identical inputs in order to get the desired outputs. As such, facilities, structures, and rules are the most important. Athletes and coaches are interchangeable. SDSU does not have a system. They have a culture where people are valued above all else.

Cultures are malleable, able to mold to the peculiarities of the people involved while keeping inherent traits intact. On any given day, the players do not know what challenges await them. If Hall senses that the actual human beings in front of him are not responding, he will completely change his approach. 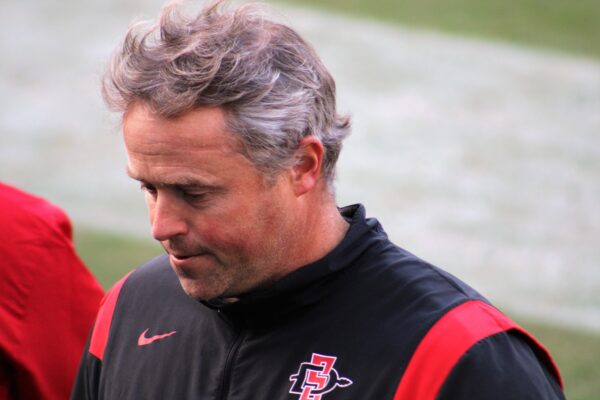 At the core of this method is a gamble. Hoke and his staff wager their jobs by empowering their senior class to lead the program. The same players who embrace the gauntlet Hall lays out to them as recruits are trained by it over the years. When they enter their final season on the Mesa, the seniors are ready to lead the rest of the team in the Aztec Way.

“They have to do it our way, which is our players’ way,” Hall explained about how transfers are caught up to speed. “Our players will do the job of setting an example for transfers to follow … they fit into the culture that we have, and our players, not me, our players are the ones who demonstrate that to them.”

SDSU competes against programs with more money, flashier facilities, and bigger recruiting budgets by believing talented, hard-working people can find unconventional ways to success. Each season is treated as its own entity with the identity and direction of the team left open to create. In this light, the athletes and coaches are artists, and the season is their canvas.

The freedom and responsibility of this approach is not for everyone. First and foremost, it takes special young men who love football enough to work harder and to be tougher than any team in the country. It, likewise, takes unique coaches who want to build a truly, one-of-a-kind team almost from the ground up every season. It takes people like the irreplaceable Adam Hall.

Interested in hearing the entire conversation with coach Hall? Listen to the interview at the link to the podcast below

My earliest sport's memory involve tailgating at the Murph, running down the circular exit ramps, and seeing the Padres, Chargers and Aztecs play. As a second generation Aztec, I am passionate about all things SDSU. Other interests include raising my four children, being a great husband and teaching high school.
Tags: SDSU, SDSU Aztecs, SDSU Football

1 thought on “The irreplaceable, Adam Hall”