Beginning in December of 2018, SDSU did a complete self-analysis of its recruiting process.

The Aztecs were coming off a 7-6 season. For a program that prides itself on “playing the right way,” the team uncharacteristically quit during their bowl game against Ohio University. Though the 27-0 defeat was an embarrassment, it also served as a catalyst for a complete overhaul of the way SDSU recruits.

The guiding question for the self-reflection was, “who are the players that have been successful at SDSU, and what characteristics did they possess?” The coaching staff identified three attributes, which have become the guiding values of the program.

“It comes down to toughness, guys that love football, guys that do the right things on and off the field,” football recruiting analyst Matt Razzano told the East Village Times in an exclusive interview. “Those are the three main things that we harp on and are the foundations of our football program.”

Razzano started his tenure with the Aztecs as a student intern in 2017, but he was not the first in his family scouting football players in San Diego. His grandfather, Anthony, worked under Sid Gillman with the Chargers from 1967 – 1971. The senior Razzano made his name as one of the architects of the 49ers dynasty of the 1980s. As the Director of College Scouting in San Francisco, Bill Walsh credited him for bringing Joe Montana to the franchise. Anthony’s son, David, carried on his father’s legacy. He is currently the Director of Football Research for the Las Vegas Raiders.

“I always knew football was going to be a career path that I was going to take,” Razzano said. “My father works as an NFL scout. He’s been doing so for thirty-five years. It’s always something that I wanted to do growing up in a football family.”

Razzano joined the staff officially in 2018, the same year SDSU was conducting its internal review.  He helped build SDSU’s recruiting from the ground up. Beginning with the three foundational values, the Aztecs designed an approach uniquely tailored to the program’s strengths.

One of the first changes Brady Hoke made when he became head coach was to add three recruiting coordinators to his staff. Under former head coach Rocky Long, Razzano was the only person whose sole role was finding new players.  Now, he leads an entire department as they support the coaches in unearthing the next great Aztec warriors. 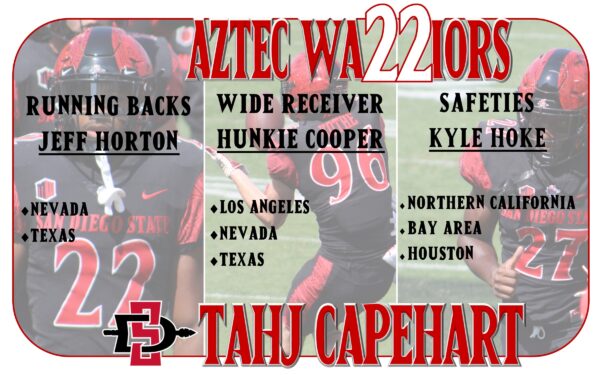 Each recruiting coordinator has been assigned three or four position groups. Nik Embernate oversees the recruitment of any quarterback, offensive lineman, or tight end. Anthony Zampese handles the defensive line, linebackers, cornerbacks, and special teams. Tahj Capehart, the newest member of the staff, manages the recruiting of running backs, wide receivers, and safeties.

The Aztecs have centered on California, Hawaii, Nevada, Arizona, New Mexico, Texas, and the US territory of American Samoa as their focal points for recruiting. The graphics in this article detail which coach is assigned to which areas.

“Our coaching staff does a great job prioritizing recruiting,” Razzano said.  “They bring a lot of energy and a lot of passion when it comes to building relationships with student-athletes. They are able to tell our story about what we have to offer.” 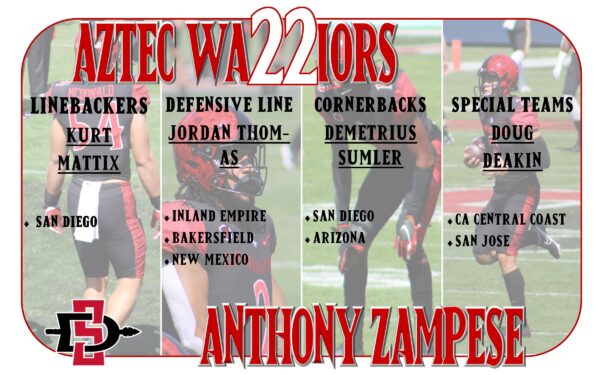 SDSU’s recruiting structure brings multiple benefits, but as with everything in the program, its chief aim is to help the Aztecs become one of the top football programs in the country. What happens on the field during the season is the team’s primary focus. Razzano has organized recruiting to maximize the coaches’ ability to prepare the team for the current season while also giving SDSU an edge in bringing the next wave of talent to the Mesa.

For instance, let us say that this week coach Horton watches a game at Lovejoy High School in Lucas, Texas, and coach Sumler takes in a contest at Hamilton High School in Chandler, Arizona. While there, each sees an offensive lineman they think might fit the program. The coaches would relay the players’ info to the recruiting coordinators supporting them, Capehart and Zampese, respectively. They would work directly with Embernate to get the process rolling. 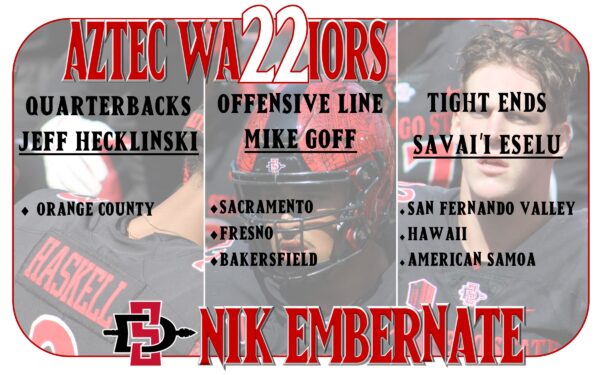 It would be the recruiting team’s job to do all of the legwork, from evaluating and cutting the tape to organizing the best people to contact at those schools. The work they do would allow Mike Goff to make a full evaluation of the players more efficiently and free the offensive line coach to spend more of his time preparing the offensive line to face Rocky Long’s blitz packages on October 9. The longer a recruiting coordinator works with a coach, the more he is able to tailor his presentation of a recruit according to the strengths and preferences of the coaches he supports.

One visible change in recruiting the past few years is SDSU’s presence on social media. Search “#AztecWa22iors” on Twitter, and the results will be a smorgasbord of edits the team’s in-house graphics department has put out.  Using the stats SDSU’s media department provides, the artists use the platforms to tell the story of the university, the city, and the football program.

The earliest use of the #AztecWa22iors hashtag was on September 1, 2020. The date is no coincidence. On that day, the NCAA, for the first time, allows college coaches to contact and recruit high school juniors directly. When Razzano sent out that original tweet, he was announcing to 11th graders around the world that SDSU was on the hunt for the next great Aztec.

Looking for the next great #AztecWA22IORS 👀 Class of 2022 what up‼️

Razzano’s tweet received 174 replies. Most of those were coaches, parents, and players trying to catch the eye of SDSU’s recruiting analysts. There are more than a million high school football players in the United States. Razzano and his staff have many resources at their disposal to find recruits, but these personal connections on social media are one of the best ways a player can stand out from the crowd.

“Obviously, we love getting (Hudl videos) because we love finding guys that are able to fit our program,” Razzano said. “Once we get those videos and we watch the film, we reach out to the local high school coach or someone that we have connections (with) to give us a little bit of background on the kid, character-wise.”

What the coaches are looking for in a potential recruit’s character are the three foundational values they identified in the 2018 self-reflection. If a player is tough, loves football, and does the right things on and off the field, SDSU coaches reach out and begin forming a relationship with the student-athlete. Hopefully, the relationship leads to an unofficial campus visit or a trip to Dignity Health Sports Park to take in a home game.

Through all of this, SDSU’s staff watches the player’s film from the current season and keeps in contact with the player’s coaches. If they continue to see a fit, they will extend an official offer to a recruit and/or invite him for an official visit. It is at the official visit where they are able to go in-depth about the program, the school, and the player’s fit in both areas. These trips go a long way in securing or cementing a player’s commitment to becoming an Aztec.

“It obviously starts out with the outreach, building that relationship, and making sure it’s a good fit, “Razzano explained. “What it is, is we’re welcoming these guys into the Aztec football family…Once we get them locked in and they get in this program, we develop the students. And that’s why we have such success here without really having much turnover when it comes to the transfer portal and things along those lines because we do all the vetting. We make sure that the guys are going to be a right fit for us as a program.”

One of the main recruiting advantages the Aztecs currently have is the construction of the new stadium in Mission Valley. SDSU’s new home will be a big part of a student athlete’s experience as a member of the program. Everything about SDSU’s new stadium will be a boon to the game-day experience. Just the promise of the new digs has already paid dividends on the recruiting front.

“The new stadium is huge, obviously,” Razzano explained. “That whole development with the stadium and San Diego State West as a whole is really going to be the centerpiece of San Diego when it comes to the football program and the school itself. … We’re really looking forward to the gameday environment that it’s going to provide. It’s just a really unique situation, too. There are not many schools that are building new stadiums around the country, and that’s something that we’re really utilizing as a recruiting tool.”

With a renewed focus on the values of toughness, love for football, and personal integrity, along with a reorganization of the entire recruiting process, SDSU has never been in a stronger place to find the next great Aztec warriors. It remains to be seen how soon the program can ascend to the heights of coach Hoke’s vision, but one thing is certain, with great people like Matt Razzano working towards that ultimate goal, accomplishing it is likely only a matter of time.

My earliest sport's memory involve tailgating at the Murph, running down the circular exit ramps, and seeing the Padres, Chargers and Aztecs play. As a second generation Aztec, I am passionate about all things SDSU. Other interests include raising my four children, being a great husband and teaching high school.
Tags: Matt Razzano, San Diego State Football, SDSU, SDSU Aztecs, SDSU Football