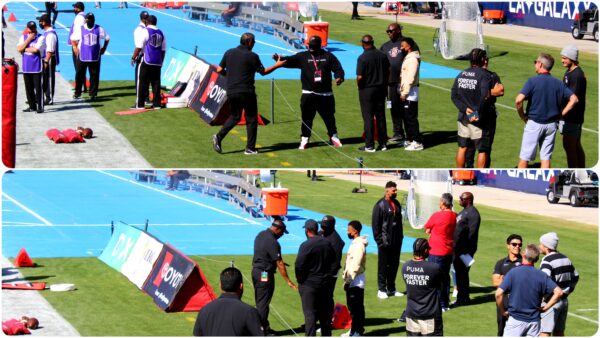 Just outside of the players’ tunnel at Dignity Health Sports Park, a little to the right as you enter the playing field, is an area where recruits, their families, and their coaches can come, by invitation only, to watch the Aztecs as they warm-up for their game. Before the first two home games this season, players from the 2022 and 2023 classes have stood to the side of the south end zone as SDSU players work out before kickoff.

Periodically, the coaching staff will emerge from the tunnel and greet the players. After exchanging pleasantries, they answer questions and deepen the relationships they have formed with the potential Aztecs. Drew Azzopardi, an offensive tackle from Junipero Serra High School in San Mateo, made the near-400 mile trip to watch SDSU defeat Utah in triple overtime. He was one of the potential Aztecs in attendance on Saturday.

“My parents and I had a great time,” Azzopardi told the East Village Times. “The coaches and players were great and really made us feel welcome. It was cool to have some time to speak with them about the start of my season and SDSU football. The crowd was into it, which made me feel that it’s going to be sweet in the new stadium.”

Azzopardi is considering the Aztecs among five offers, including Mountain West Conference rival Nevada. He stands 6’6.5” inches, weighs 310 pounds, and has an 83” wingspan. On film, he displays everything one would want to see from a division one prospect. He is quick off the ball, relishes contact, and generally makes one feel sorry for his opponents lining up against him.

“I play right tackle on a very good Junipero Serra Padre (San Mateo) team,” Azzopardi explained. “I love to run block and get out and pull on screens and smash linebackers and defensive backs. I just started playing OL last year, so I am still learning. What is important to me is practicing and playing hard every day with my brothers and, of course, winning. Our goal as a team is to win state, and that is what we are focusing on.”

The five offers he holds are clearly too few for a player of his caliber. While he can expect more before signing with a school, it is easy to see why SDSU was among his first offers. The Aztecs look for particular qualities in their players: toughness, grit, and outstanding character. Azzopardi displays all of these.

“SDSU’s offense does a lot of different things, but their focus on running the ball and pushing the defense around is exactly what I am looking for,” Azzopardi said. “I like to pass block a lot because I can use my length, but it’s fun to push people around.”

SDSU pulled out all the stops on Saturday to help him feel comfortable with the program. Offensive line coach Mike Goff came over to speak with him and his family. Football Recruiting Coordinator Nik Embernate, who supports Goff with all the offensive line recruits, also visited. The secret weapon was Embernate introducing senior offensive lineman and former team captain Dominic Gudino to Azzopardi.

“The way he’s gone after representation of himself as a person, his family, and San Diego State football, there’s not really a better guy you could think of,” SDSU head coach Brady Hoke said when asked about using Gudino as an ambassador of the program. “I’m really excited about the progress that he’s made to come back. I’m really excited about him as a person. I’m really grateful he’s on our football team.”

“One thing we always say is ‘our players are the best recruiters we have,’” SDSU Football Recruiting Analyst Matt Razzano added in an exclusive interview. “They are going to be upfront and honest with (recruits) on what to expect because, obviously, with recruiting, there’s a lot going on. There’s a lot of people talking to these kids about what’s going to happen. We think our players have such a good perspective of what we do here and what it takes to be successful as a student-athlete here. We like to get our players as involved as possible to talk to the recruits to let them and then, their parents know about the firsthand experience here.”

Bringing Gudino out to meet potential Aztecs is less about convincing them to join the program and more about making sure the recruits and the school are the correct fit. SDSU wants players and their families completely bought into coach Hoke’s vision. To that end, SDSU values honesty in the process because they demand so much of their players.

Following their win over Utah, SDSU’s record against Pac-12 schools improved to 7-2 in their last nine contests against the conference. A common refrain among the fan bases at the schools the Aztecs have defeated is wondering how SDSU’s offensive linemen outperform the players on their teams. If Azzopardi chooses San Diego as his next home, it is easy to envision these same fans over the next four or five years thinking of him as one that got away.

Leader of the Pac… #Win22 pic.twitter.com/nzAfANrara

It remains to be seen if his trip to Dignity Health Sports Park will be enough to influence him to spend the next three to five years in San Diego, but one thing is certain, Azzopardi already sounds like an Aztec.

“San Diego State has had so much success against Pac-12 schools because they have been a great program for a long time,” Azzopardi said. “Coach Goff made a point of saying they want to beat everyone, and it doesn’t matter what conference they are in. I agree with him.”

My earliest sport's memory involve tailgating at the Murph, running down the circular exit ramps, and seeing the Padres, Chargers and Aztecs play. As a second generation Aztec, I am passionate about all things SDSU. Other interests include raising my four children, being a great husband and teaching high school.
Tags: Drew Azzopardi, Drew Azzopardi Aztecs, SDSU Aztecs, SDSU Football, SDSU recruits