That is the best description of the atmosphere at SDSU’s Pro Day on Tuesday. As the current NFL hopefuls did their to impress professional scouts, Aztecs past and present descended on the synthetic practice field just behind Parking Structure 7. Like an uncle or a long-lost cousin rolling up to a family BBQ, each new person emerging from PS7 was greeted with smiles and hugs. Joy filled the air as former teammates shuffled amongst each other, trying to catch up with friends separated by circumstance.

Atlanta Falcons cornerback Darren Hall bear-hugged Parker Baldwin from behind, seeing if his former teammate could guess who had just manhandled him. When Baldwin turned, the two shared an embrace. On and on, this went for the entire few hours of the competition.

“These are my brothers,” Aztec for life Tariq Thompson said when asked why it was important for him to come support his former teammates. “Growing with them, just coming in with them. Seeing them grow and turning their dreams into reality is special. You always want your friends and brothers to accomplish and get it done. I feel like they did a great job today and am excited for their future.”

The participants in the drills appreciated the support. Each made their way through the gauntlet of well-wishers. This organic gathering of the Aztec football community was a reminder of what makes sports great. It was a pleasant contrast to the rest of the day dedicated to the clear message that football is big business.

“It means a lot,” Tayler Hawkins said. “D. Hall, he’s on the Atlanta Falcons. He just told me to finish through on my drills. It helped a lot and showed me I have that support. I have all my guys out here. So, I’m just trying to show them what I have been working on because I haven’t seen them in a while. It means a lot for them to be out here supporting me and some of these other guys out here too.”

“It was awesome,” Matt Araiza explained, echoing Hawkins’ sentiment. “The only Pro Day I have ever watched was the Covid one, so we had to be hidden (in the parking structure). I have never seen this atmosphere before. This was awesome. I, personally, perform better with an atmosphere than just on a field by myself. It definitely helped me. I love kicking in front of a crowd with a bunch of cheers and stuff. It was fun.” 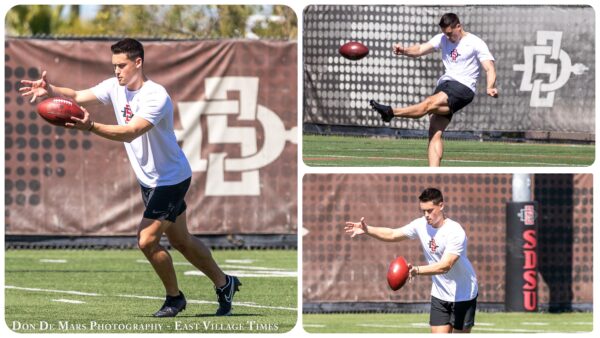 At about 11 am, before the rest of his teammates emerged from the weight room, Matt Araiza was booming punts on the grass field under the watchful eye of SDSU coaches Doug Deakin, Brady Hoke, Savai’i Eselu, and La’roi Glover. With each kick, the talent NFL teams covet was on full display. The hometown hero came into the day hoping to duplicate his efforts at the NFL combine.

The importance of the day could be sensed by the few people standing nervously on the sidelines or sitting silently on the metal bleachers. At the opportune time, a song rang out that broke the silence. On the synthetic field at the end of their practice, SDSU’s women’s lacrosse belted out “Happy Birthday” to one of their players.  After the rendition, smiles widened, and conversations grew louder. Araiza was summoned to the adjacent field, and the on-field portion of SDSU’s Pro Day commenced.

The Aztec specialist’s best moment came when he kicked from the opposite 35-yard line and placed two of three attempts inside the five. On the first attempt, the ball landed on the seven-yard line on the near hash mark. It bounced to the left and narrowly went out at the half-yard line. SDSU kicker David Delgado screamed, “That went out at the one,” grabbed his lip, and let out an approving whistle.

“Full disclosure. He’s the most genuine person I have ever met,” Araiza said about Delgado.  One of my closest friends. I have never met anyone who is genuinely happy for other people’s success. That’s why I love him. That’s why the team loves him. He’s a great guy to be around. Definitely, happy he was out here.”

The most guarded secret of each NFL scout was the times the players recorded. They would not even tell the participants how they performed after the event. Throughout the day, the gathered spectators got out their phones to time the 40-yard dash or cone drill themselves. While few hard numbers were available, from this untrained eye, Hawkins, Olubi, and Bell ran well.

“I feel alright,” Hawkins said afterward. “I felt pretty good. (The scouts) said I had a really good workout, so it was good what I’m hearing. I feel like I did alright. I didn’t hit some of my goal numbers. There’s definitely room for improvement.”

Hawkins measured a little over 6’0” and 203 pounds. Numbers in the vicinity of 4.45 were thrown out by multiple people, with one scout wearing Steelers gear loudly lecturing the spectators how to round numbers. He had Hawkins as a “4.5” player because he rounded Hawkins’ 4.48 up to 4.5. Numbers aside, a pair of other scouts tried to reassure Hawkins by reminding him that “the tape does not lie.”

Bell sported a short haircut with the top dyed blonde. He looked faster in his second 40 than in his first. He has a chiseled frame, and his size, speed, and agility are impressive. After competing at the Combine, where Bell said he felt he belonged, he wanted to show he was fast and fluid to the gathered teams. There were many twists and turns to his career, but it was fitting for the hometown hero to finish his amateur career at his local school.

“It was a roller coaster,” Bell replied when asked to reflect on his career. “I didn’t envision it like this, but it paid off. I’m glad I’m at San Diego State in my hometown working hard.”

At 6’0” 225 pounds, Olubi put on a show. The agency that represents him put out a 4.44 40 time, a 34.5 inch vertical, and 21 reps on the bench press. Olubi’s numbers on his pro day would compare favorably to the top linebackers in the entire draft class. His performance was not surprising and should be more than enough to get him an audition for the league. 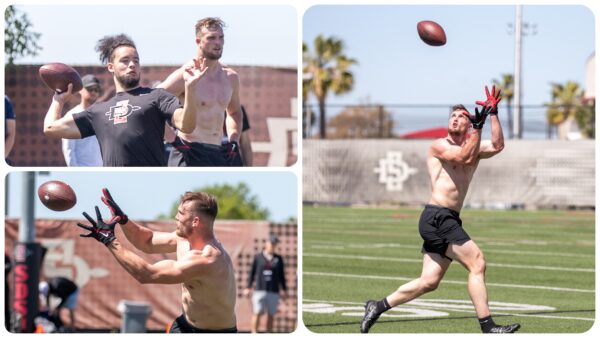 Bellinger has had a terrific lead-up to the NFL draft. He was voted the top tight end on his Senior Bowl team. At the NFL combine, he finished among the top at his position. On Tuesday, he looked to improve his vertical jump, three-cone drills, and shuttle.

Parker Houston, Connor McBride, Jay Rudolph, and other players that Bellinger shared the tight end room during his time on the Mesa took in the festivities.  As someone who has kept his hand on the pulse of the team, the former team captain took particular pride in the various Aztec classes on hand to support him.

“It just makes me proud,” Bellinger said of the support. “To make these guys proud and to put on for these guys is something that’s important to me and important for our team. It’s important here at San Diego State to just show that anybody can make it as long as you put the work in. You understand what it takes to come out here and accomplish your dreams.”

SDSU’s hulking tight end also took part in receiving drills to show his ability to stretch the field. Bellinger invited his former quarterback Jordon Brookshire to throw to him. Brookshire is on campus taking classes at SDSU. He is on schedule to write his Master’s thesis over the summer.

“He’s a great friend of mine,” Bellinger said of Brookshire. “We hang out a lot off and on the field. I just knew when I got back. He was the first guy I hit up, ‘hey man, are you free?’ He was free, and he’s been out here working out for about a week and a half before this. He showed up every day early with me. My friendship with him means a lot to me. It shows the kinds of teammates we have here. They’re great teammates whether we’re still at San Diego State or we’re not.”

The rest of SDSU’s participants

Cameron Thomas and William Dunkle did not perform in the outside drills. Zachary Thomas participated in a small portion of the events. He showed great speed and agility in some pulling drills prompting one of the DBs gathered to shout out, “I would not want that coming at me!” The rest agreed. Thomas also showed good strength in a drill where he blocked from his knees.

Former defensive linemen Jalil Lecky and Sefo Mailangi also participated. Jonah Tavai and Keshawn Banks were on the sidelines supporting their former position mates. Lecky showed that he is a long, fluid athlete. Mailangi’s form was not as polished as the others. After the event, he said he thought he could have run faster. Afterward, Mailangi said he was looking to take his football career as far as he can. As a backup, he had been working out with players from the SD Legion.

Trenton Thompson ran very well yesterday. During his first 40, he was visibly upset with a misstep. He corrected it on the second try. He was happy to see the contingent of gathered Aztecs. Thompson greeted former long snapper Jacob Raab with their personal handshake. Raab was the only person on the 2021 team Thompson had a unique greeting with.

The final Aztec on the field was Dominic Gudino. Gudino said afterward he was forced to pursue this next step because his eligibility at SDSU was exhausted. The former team captain has been working from six to two out of a warehouse while working out at Alex Johnson Sports and Fitness in La Mesa.

“Honestly, I was just trying to put my best foot forward,” Gudino said. “I wasn’t able to go to the combine, so I was trying to show the best that I can come back from the injuries I had from last season. That was my biggest thing, showing that I could run, that I could move again because I haven’t had too much game film. I think today was huge putting some sort of good numbers out, showing the scouts I could still move.”

Bell finally has his Chance to shine

SDSU’s Michael Shawcroft playing for his city, in his city