Cameron Thomas was on hand to take in the Aztecs’ football practice on Monday. Walking around the practice field, he looked the part of an NFL lineman. Four seasons ago, when he arrived on campus, few could have guessed a professional career was in store for him, much less that he would leave early to begin it.

Thomas’ presence during the last week of spring camp was a clear reminder of an amazing development on the Mesa over the past three seasons. Under Brady Hoke, SDSU has become an elite training ground for defensive linemen.

“I’ve seen (Hoke) work with defensive linemen for years, and he’s one of the best at it,” Rocky Long said when he hired Hoke as defensive line coach in 2019. “He’ll get really involved with them, and they will be much, much better in a lot of ways, not just on the football field. They’ll be a lot better the rest of their lives.”

Hoke continues to work day-to-day with the unit alongside newly hired defensive line coach Justin Ena. Ena, whose resume includes time as Utah State’s Defensive Coordinator, brings a wealth of experience to his duties on the staff. In addition to Hoke and Ena, the players at the position also benefit from the knowledge of Le’Roi Glover.  The four-time NFL All-Pro defensive tackle was at practice Monday. Glover volunteers at SDSU, travels with the team to away games, and spends much of his time coaching the line.

The prowess of SDSU’s coaching at the position is not hubris. Those outside the program are noticing as well. Jordan Thomas was hired last month as a defensive line coach by the Cleveland Browns. The highlight of Thomas’ resume is his time working under Hoke at SDSU.  Cameron Thomas may be the latest Aztec defensive lineman working on a professional career, but with the coaching expertise in the program, he will not be the last. 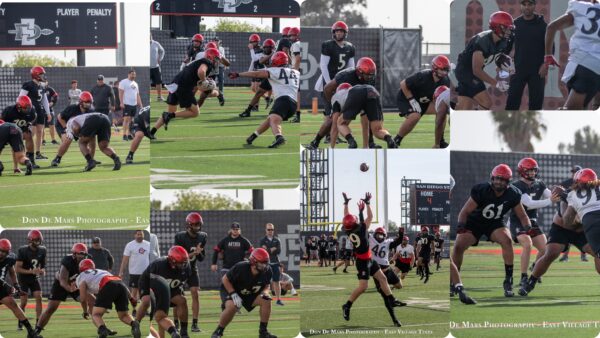 Only 20 minutes of Monday’s practice was open to the media. That brief window, plus a few minutes of warmups, provided a glimpse into the quarterback competition. Braxton Burmeister is being treated like the starter. Not only did he take the first reps in team drills, but when the centers practiced snapping, starting center Alama Uluave only snapped to Burmeister.  Presumed backup, Tommy Mirabella, hiked the ball exclusively to Will Haskell.

Burmeister was very efficient in the team drill. He finished 6 for 6.  None of his passes went beyond 10 yards. He was decisive and spread the ball around with only Jesse Matthews, the recipient of more than one pass.

Haskell was the only other QB who attempted a pass in the team drill when the media was present. He completed a pair of short passes. The lone, long pass of the period was knocked out of the hands of true freshman tight end Logan Tanner by starting safety CJ Baskerville. The opportunity to see Haskell was short, but in only a couple of attempts, he showed what sets him apart, next-level arm strength.

On his first attempt, he threw an out to the sideline that traveled half the width of the field on a line. For most signal-callers, that pass would have been a sure interception. Cornerbacks coach Demetrius Sumler yelled at Jelani Whitmore, the defender, to “finish the play.” What Sumler could not see was that the only person with a chance at the ball was Haskell’s intended receiver, Brionne Penny. Penny made the reception, working his way back to the ball while shielding Whitmore and narrowly getting a foot in bounds. The play brought a few “ahhhhs” from the gathered high school teams.

Haskell’s arm strength was also on full display on the final pass of the period. On the aforementioned incompletion, Haskell fit a ball into a window between linebacker Michael Shawcroft and Baskerville. Few QBs could have gotten the ball there before Baskerville had a chance to intercept it. Not only did Haskell’s throw beat the sophomore safety, but Tanner got two hands on the ball and could have brought it in.

Overall, compared to how they appeared in the first practice, the quarterbacks looked like they had been competing in spring ball for weeks.  They were crisp for the most part. Quarterback coach Jeff Hecklinski’s instruction appeared more familiar to his group. Ranking the QB in the brief glimpse given. Arm strength: Haskell by a large margin, then Liu Aumavae, Braxton Burmeister, and Kyle Crum. Accuracy: Burmeister by a large margin, followed by Aumavae, Crum, and Haskell.

– Norv Turner was on-hand for practice. He observed the QBs.

– There was a good crowd gathered for the scrimmage. Most were from high schools visiting SDSU.

– Baskerville is a presence. Even from across the field, his size stands out.

– Burmeister’s maturity was evident. He knew how many throws he needed to warm up his arm and elected to begin throwing later than the other QBs.

– Kurt Mattix is by far the loudest coach, making his choice to coach from the booth more interesting.

– On only one other occasion could a coach be heard above everyone else. Brady Hoke yelled at Jack Browning because his punter did not run down to make a tackle on punt coverage. Hoke reminded Browning it was the second time in a week where the problem came up. If the team’s goal is eleven hats to the ball, ensuring the punter lives up to that should set the tone for the culture of the team.

– Mekhi Shaw practiced as the team’s holder. He dropped one snap in warmups. He also had a reception in team drills.

– Jesse Matthews, Tyrell Shavers, TJ Sullivan, and Mark Redman were the “starting” skill position players for the beginning of the team period. The receivers took most of the snaps when Burmeister was under center. Redman rotated with Jay Rudolph. Running back, Nicholas Gardinera from Scripps Ranch ran routes along with the group.

– Trombley replaced Joey Wright at LG, and Leonard replaced Jonathan Harrison at LT after a few snaps. When they rotated in, the right side Brandon Crenshaw-Dickson (RT) and Ross Ulugalu-Maseuli (RG) and center Uluave remained the same.

– There were five additions to the latest spring roster. All are tryout/non-scholarship players

Camposeco won the Willie Jones Most Inspirational Award in 2020. His story is powerful and moving. Here is an interview he did with KUSI. On the field, Camposeco was a four-year varsity starter, a team captain, and helped Francis Parker to a Division V title his season year.

Hyde’s inclusion on the roster makes 37 the most numerous jersey number on the team. He shares the jersey with Ace Saca and DJ Bryant. Hyde’s measurables are certainly intriguing. At a position where walk-ons have flourished, Hyde will work to be the next one.

Reyes is a junior whose last playing experience is from high school. He was a good player earning an invite to the 2018 Football Paradise Classic. If he can participate in any meaningful action, it will be a great story.

A hometown hero, Chavez, was mentioned last week by Doug Deakin as the primary competition for Ryan Wintermeyer at long snapper. Chavez was a linebacker in high school, so he should be an asset on punt coverage. He is also big enough to block on field goals.

A local product from Southwestern College, Dickerson played defensive end for the south county community college. He was in the last row of players stretching and certainly looked the part. He has a big frame.

My earliest sport's memory involve tailgating at the Murph, running down the circular exit ramps, and seeing the Padres, Chargers and Aztecs play. As a second generation Aztec, I am passionate about all things SDSU. Other interests include raising my four children, being a great husband and teaching high school.
Tags: Aztecs, Brady Hoke, Braxton Burmeister, Darius Hyde, Jaylin Dickerson, Kristein Reyes, Sam Camposeco, SDSU Football, Will Haskell