Don Warren is the gold standard for tight ends at SDSU.

A member of the 2013 Aztecs’ Hall of Fame, Warren played two seasons on the Mesa (1977-1978) after transferring from Mt. San Antonio Community College.

Warren’s final year was sensational. He was a team captain and paced the Aztecs with 39 receptions. Following the year, Warren earned 1st Team All-WAC honors, Honorable Mention All-American, 2nd Team Academic All-American, and was invited to East-West Shrine Game. The Washington Redskins selected him in the fourth round of the 1979 NFL Draft.

In 1988, Warren returned to San Diego alongside former Aztecs Joe Gibbs and Vernon Dean to win Super Bowl XXII. It was the second of three titles he won with Washington. Part of the original “Hogs,” Gibbs once called Warren “the most irreplaceable player” on the team. Warren prepared and played in a way that would make current SDSU head coach Brady Hoke smile.

“He was our prototype player as far as work habits, work ethic, attitude, and playtime,” Washington general manager Charley Casserly said in 1993. “He didn’t come to us with all-pro talent. He came with an all-pro attitude. … For 14 seasons, he was the best blocking tight end in the NFL. Players such as Lawrence Taylor and Carl Banks knew the toughest afternoon they’d face would be against the Washington Redskins because of Donnie Warren.”

Article four of the East Village Times SDSU Football season preview examines the players following in Warren’s footsteps as Aztec tight ends. It was preceded by a look at the quarterback, running back, and wide receiver positions. 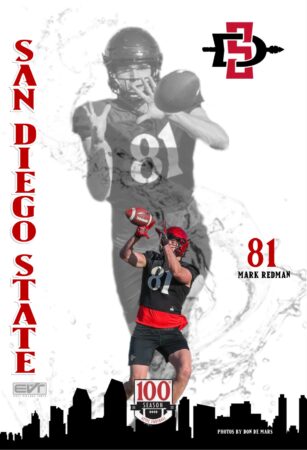 Arizona State, Arkansas, Baylor, Cincinnati, Utah, and USC are just some of the offers SDSU’s tight ends rejected to come to SDSU out of high school. Add the schools that extended transfer Mark Redman a scholarship, and Alabama, Ohio State, and Georgia join the list. Every player was at least a three-star recruit. It is not an exaggeration to suggest that this exact room could be swapped with many of the schools in the Power Five, and there would not be a drop-off in talent.

High school potential is one thing. College production is another. The group misses out on the top grade because it has yet to show that their accolades before arriving on campus were correct. SDSU’s tight ends have two receptions for seven yards combined in their careers. At this point, the group’s talent is more of a projection of what they are expected to become, especially in light of Daniel Bellinger’s growth as a player. 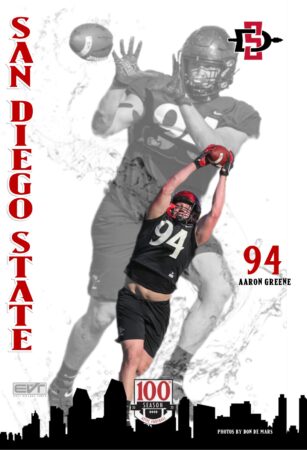 Like Warren with Washington, the value of the tight ends goes far beyond the box score. Nowhere was this more evident than in the contrast between how SDSU played in the Mountain West Championship Game and the Frisco Bowl.

The game plan against UTSA was supposed to be what the Aztecs used against Utah State before Covid wreaked havoc on the tight end room. At one point, Hecklinski put offensive linemen Joey Capra and Dominic Gudino in at the position just to give the offense a feeling of normalcy.

SDSU will be depending on a group with a new makeup in 2022 at one of the most important positions on the team.  Redman is replacing Bellinger at the Y.  Aaron Greene is expected to hold down the third tight end spot when the team goes into its 13-personnel. Even last season’s starter Jay Rudolph’s usage is expected to change. Behind those three are players who have a combined two games of playing experience.

“We got some younger kids behind (Redman) that have got to develop,” Hecklinski said. “I think we have two extremely talented tight ends in (Redman) and Jay Rudolph. They are game ready right now. Now, between Aaron Greene and Gus McGee, Cameron Harpole, and all the young ones that we have coming in, now we have to find who’s going to be number three, who’s going to be number four. Is there somebody that’s ready to allow us to go into different personnel grouping? So, now, you can go from tight ends to receivers to backs, and now you can move everybody around.” 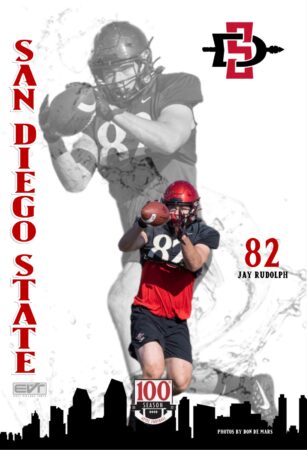 Confidence in the starters: B

Caution about the potential of the unit because of their youth and inexperience should not be read as a lack of confidence in the starters. Redman and Rudolph have extensive experience in their careers. Both were part of the 2020 recruiting class. Redman played in all 16 games on Washington’s schedule in his two seasons there. Rudolph has played in 20 of the Aztecs’ 22 contests over the same time, only sitting out his first game as an Aztec and the Mountain West Championship game due to Covid protocols.

Both are familiar with the speed of the game. They are upperclassmen moving on a typical path in their careers. The duo has paid their dues as blocking tight ends. Next season, their role in the passing game is expected to grow. 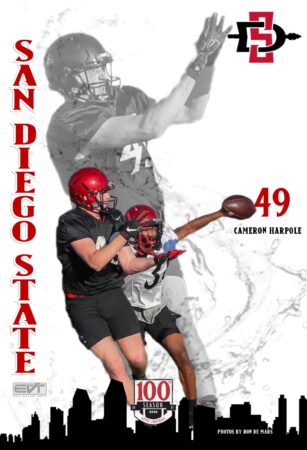 SDSU’s offense has yet to prove it has the firepower to have more than a pair of stars on the field at one time. Bellinger is moving from SDSU to potentially a starting role in the NFL, and he was not even an honorable-mention all-conference player a year ago. Given these dynamics, it is doubtful even a tight end as talented as Mark Redman will be able to elevate the position to stardom. The Aztecs won 12 games a season ago without serious production from the tight end in the passing game, so matching the unit’s output from a season ago is a realistic goal.

“I think Mark is going to fit in the same mold as Dan,” Hecklinski said. “Obviously, we’re replacing a player that if you look at … Dan never came off the field except in certain situations, Dan rarely came off the field. Mark has a chance to be in that same mold. … Dan progressed through the course of 22 games to be able to (play in multiple areas). Now, when he goes to the next level, he’s not a one-dimensional tight end. He’s not just a one-trick guy that can do one thing. He is so versatile. He can play anywhere on the field. I think Mark is going to have a chance to develop into that same type of player for us where he’s developed as a complete tight end. … Those are big expectations for Mark to fill those shoes, but that’s why Mark came here. When Mark was leaving Washington, that’s what he was looking for. ” 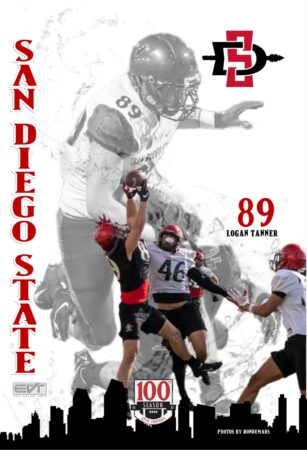 “Versatility and length,” Hecklinski said, describing his ideal tight end. “If you’re somebody like Logan (Tanner) who is not as long as Mark Redman or Gus McGee, then you have to have the versatility to be able to move all over the field. That’s where I think he’s going to be in that same mode as Jay. When you look at Jay in high school, he was really a pass catcher, but when he came here (in 2020), one of the things about that (Covid) year was, we were so limited on what we could do that Jay really became comfortable in his strength, in his body, in his mindset. That’s how he got on the field with special teams and being that kind of 12-personnel type, where he was going to put his face in contact. With Jay, we’re really starting to build around getting back to being a little more of that pass-catching tight end that he was. Where Logan, I think, coming in was a pass catcher, and with what we were able to do this spring, I think we were much more in a position where guys like Mark, Logan, and really all of our tight ends were able to work both the passing game and the running game, and not being as one-dimensional with what we had to face in 2020.”