Carlos Asuaje wasn’t on the San Diego Padres’ Opening Day roster, but he had a significant impact on the club during the 2017 season.

Asuaje was called up by the Padres from Triple-A El Paso on May 22. He made his first appearance on May 23, during a game against the New York Mets.

He was only with the Padres for two days before being sent back to El Paso. He was called up again in late June, when it became clear that Cory Spangenberg would not return when expected.

Asuaje was recalled on June 23, and became the starting second baseman. He started in 87 games for the Padres, posting a .334 on-base percentage and slugged .362.

In a season where Asuaje started as a top-10 prospect and wasn’t seen as a big league option for a rebuilding club, he seized an opportunity to show that he belongs at the major league level.

The Padres offense as a whole was a mixed bag. Some nights, it seemed like this team could string enough hits together to have a productive inning. Other nights, it seemed that they couldn’t hit water if they fell out of a boat.

Asuaje did well at making contact with the ball. He struck out 87 times on the season, meaning he struck out only 22 percent of the time. But it wasn’t just contact that was a positive. Asuaje had a .346 BABIP. When he made contact, he was able to get on base. He didn’t hit the ball hard, but he never really was expected to hit it hard, either.

The important thing is that he didn’t strike out that much. When he did swing, which was almost half the time, he was seeing the ball. He made contact 84.1 percent of the time.

Asuaje is not a pull-hitter. He actually can hit the ball to all fields. This is a good trait for a player, because it can keep defenses guessing. Opposing defenses can’t call a shift, because Asuaje could easily hit the ball in the opposite direction. 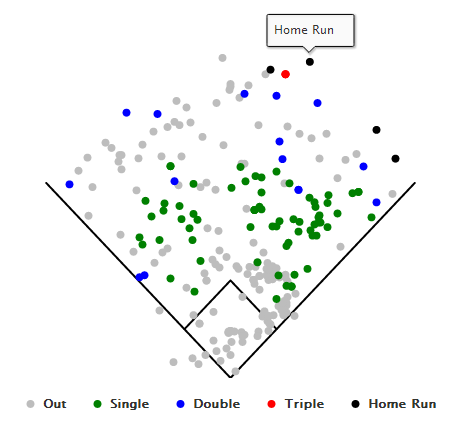 Just look at this spray chart, provided by Fangraphs. The chart shows that Asuaje could hit the ball in any direction, and did.

Asuaje wasn’t flashy with his glove, but he played well at his position. He isn’t one to go for diving plays, or look like Khalil Greene out there. However, he posted a .992 fielding percentage, and only committed three errors. Remember, Asuaje was thrown into being the starting second baseman. He didn’t go into the season expecting to be there. When he was put there, he made the most of it. You can’t ask for much more than that from a young player.

It was stated earlier that Asuaje hit the ball most of the time when he swung the bat. That’s good, but it would be better if he didn’t swing at balls that were out of the zone.

He swung at pitches outside the strike zone 25 percent of the time. He brought that down from 32 percent, which he did last season while playing with the Padres. However, he could stand to bring that number down even more.

Asuaje is still young, and will be controllable for some time. He won’t be arbitration-eligible until 2020. He’s on a 40-man roster with other players who could easily be at second base, like Yangervis Solarte, Cory Spangenberg, or Jose Pirela. On top of that, another young prospect by the name of Luis Urias is expected to the the second baseman for San Diego at some point.

For now, enjoy watching what this young man can do.

A glimpse at the Padres current rotation

Robert Suarez is a possible closing option for Padres

Aztecs bounce back against Long Beach State in 72-47 win

3 keys for an SDSU Aztecs victory over Long Beach State