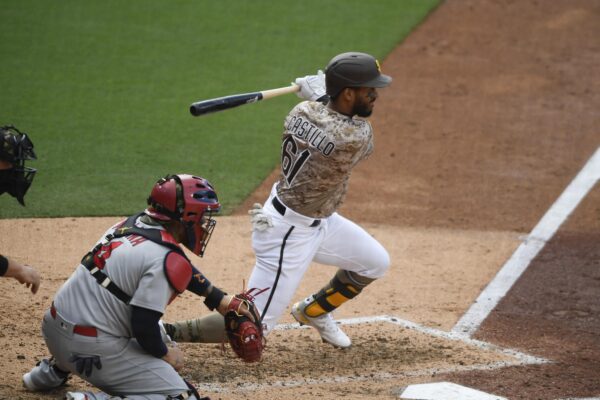 Are the San Diego Padres heating up? You tell me. With three starters, one platoon member, and a bench bat all out of the lineup, you would expect them to struggle. They did just the opposite with a three-game sweep over the St. Louis Cardinals, the team that they topped last October in the playoffs.

This sweep gave fans much to be impressed by.  In the first game of the series, they walked 12 times which tied their record at Petco Park. The second game saw the Padres with 17 hits and 13 total runs. This time around the Padres used one big inning to bring them to the sweep.

Since Dinelson Lamet and Ryan Weathers are both coming back from an injury, they have served as co-starters. It’s now typical for both of them to take a few innings of the game while they build up strength.

Weathers worked the first four innings of the game and he was quickly in hot water. With two outs in the first inning, he gave up a two-run home run to former Colorado Rockie Nolan Arenado. That wasn’t the end of the threat in the first. Yadier Molina and Tyler O’Neill managed to get two more hits to be on second and third. Harrison Bader lined a shallow hit toward Trent Grisham, who made a spectacular diving catch to save two runs and end the inning.

This would end up being just a mediocre outing for Weathers. He gave up four hits and two runs while not striking out or walking anyone. However, the most memorable moment of the game for him came with the bat. In the third inning he would record his first major league hit with a single up the middle.

The offense would then get going in the fourth inning. Manny Machado led it off by getting on base via a rare Arenado error. Then the plate discipline from the first game would return. With the bases loaded both Tucupita Marcano and Ha-Seong Kim “drove” in runs via walk.

A Patrick Kivelhan sacrifice fly then set up Ivan Castillo with runners on the corners. He would scorch a grounder down the first base line to get his first big league hit.

Three of the four players with an RBI this inning were called up to replace the players on the COVID-19 IL. Perhaps the biggest part of this stat is that none of them are the top prospects in the farm system. Marcano is the only player in the Padres’ top 30 prospects, coming in at number five. This type of depth gives an opportunity for the prized prospects to develop in the minors while the big-league team wins ballgames.

In his first career relief appearance, Lamet turned out to be serviceable. He went two innings while giving up a run and striking out two. It’s clear that he isn’t at his 2020 level, but if he gets there then he is a huge threat out of the pen or rotation, wherever Jayce Tingler decided to put him.

The Padres would score their final run on a rather weird play. With Kivelehan on first base, Grisham would line a ball to left field. The left fielder, Tyler O’Neill, was in a perfect spot to play it but started to run in on the ball. He realized that he misjudged it just too late and the ball went right over his glove when he tried to jump and correct his mistake. The scorekeeper judged that it was a Grisham double instead of an error despite having a 99% catch probability.

The @Padres are now tied for the most wins in the National League. pic.twitter.com/tkKHhT92IL

Next up for the Padres is a three-game set against the Colorado Rockies starting Monday at 7:10 at Petco Park with Yu Darvish set to take the mound.

Evan is a student finishing up a degree in Finance from Northern Arizona University. The ability to break down numbers and find the story behind them has lead to his first of writing for East Village times. He covers baseball which is the sport he grew up playing and has followed even after his playing years.
Tags: Jayce Tingler, Manny Machado, Ryan Weathers, San Diego Padres, Trent Grisham