After two very disappointing losses to the Pittsburgh Pirates, the Padres found their groove. The bats immediately got going and the pitching was stellar as usual.

As one of the top offenses in the league, there was an expectation for the Padres to light up the weak Pirates’ pitching staff. In the first game, they were 1-13 with runners in scoring position, and 1-7 in the second game. In this game, they quickly turned it around and were 4-12.

That is all it took. Throughout the series, they were getting on base and getting into scoring position. The next batter up just always failed to bring in the runners. Trent Grisham got the team going with a leadoff single. Jake Cronenworth doubled to drive him in and Machado stepped to the plate.

Manny Machado launched a hanging slider over the wall in left field. Padres are now 1-1 with runners in scoring position and are up 3-0. Eric Hosmer and Tucupita Marcano would both double to make it a 4-0 ballgame.

As a whole, the offense was very top-heavy, as nine of the 10 hits came from the top five hitters in the lineup. Machado mentioned that he’s trying to do whatever he can to help the team win, a mentality the entire group has with World Series aspirations.

“Do something productive for the ball club,” Machado said. “Whether it’s getting on base or getting those big knocks.”

That mentality will bring this team a long way.

One of those hot hitters at the top of the order is Cronenworth, who continued to show that last season was not a fluke. He was a perfect 2-for-2 with two doubles and two walks, two RBIs, and two runs. On the season he has a .358/.435/.491 slash with a 141 OPS+. With Fernando Tatis Jr. out, Cronenworth stepped up as a foundation in the middle infield and in the top of the order.

On the bump for the Padres was Chris Paddack. This season Paddack has arguably been the worst starting pitcher for the Padres. Coming into this game he had eight innings pitched and had given up five earned runs. His strikeout numbers were even lower than last season’s and in that season he had major issues.

The version of Chris Paddack on the mound today looked closer to the 2019 version that dazzled in his rookie season. What went right? Well for a two-pitch starter location is key and today it worked. He was able to execute his fastball low in the strike zone. That created a tunnel to cause batters to chase his changeup that was falling below the zone. Another factor was placing his changeup just below the strike zone. The majority of his changeups were out of the zone yet still generated a 31% whiff rate and generally weak contact.

It is too early to look at a pitcher and say they have changed, but Paddack is moving in the correct direction. 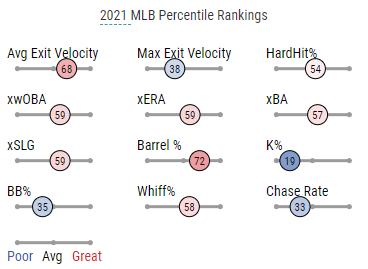 He ranks higher than his 2020 self in all categories except for K% and BB%. This means he is generating weaker contact and giving fewer pitches for batters to drive. This may not be the untouchable pitcher that he was initially billed as but will be a positive contributor if he performs like he did today.

As has been apparent for almost a week, the Padres intend to activate Fernando Tatis Jr. before tomorrow's game against the Dodgers.

As the Padres fly back to the West Coast, they prepare for the biggest matchup of this young season. Friday marks their first game against the Los Angeles Dodgers since the reigning World Series Champions swept them in last season’s playoffs. Of course, potentially the first game with Tatis Jr. back in the lineup after his injury.

Evan is a student finishing up a degree in Finance from Northern Arizona University. The ability to break down numbers and find the story behind them has lead to his first of writing for East Village times. He covers baseball which is the sport he grew up playing and has followed even after his playing years.
Tags: Padres