The Padres paid a handsome fee for Juan Soto‘s services through the end of the 2024 season. For the team to maximize his value, he will need to show improvement with the glove.

When people think about Juan Soto, they usually think about his violent swing, quick bat, or, of course, the trademark Soto Shuffle. Defense is usually not high on the list, and for good reason. Frankly, Soto has not been a good fielder.

Of course, the Padres traded for him (and paid handsomely) for his elite bat. He is one of the best pure hitters of his generation. He has led the entire league in walks in back-to-back seasons. His career .424 on-base percentage  has him on a Hall-of-Fame trajectory. At this point, that’s a better career mark than Mickey Mantle, Edgar Martinez, among plenty more Hall of Famers.

However, his glove is certainly nowhere close to his bat ability.

In 601 regular season games in the outfield, whether in left or in right, he owns a -9 Defensive Runs Saved number. However, there is a large difference between his left and right field stats. In left, he is an abysmal -10 DRS. However, in 301 games in right field, he actually comes out with 1 DRS. He even graded out at 2 DRS in his short stint with the Padres in 2022.

According to FanGraphs’ Defense metric, among 83 right fielders who have played at least 500 innings since 2019, Soto ranks 80th in defense.

He had some head-scratching defense miscues in the playoffs, including a throwing error and losing an easy fly ball in the sun, gifting the Phillies four runs in Game 2 of the NLCS.

His Outs Above Average metric is puzzling, however, when you look over his last several seasons. He was in the 89th percentile for OAA in 2021. In 2019, he was in the 91st. 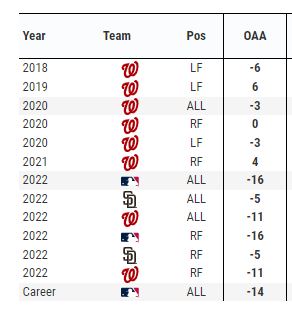 Clearly, the ability is there. Let’s be clear. He is not an aging slugger doomed to be a designated hitter for the rest of his career. He is 24 years old. Some people don’t even know what they are doing in life at 24 years old. He is young enough and athletic enough to make a change and improve.

May I remind Padres fans of another certain elite-hitting right fielder that came through town who initially struggled in the field but worked tirelessly and relentlessly, eventually winning five Gold Gloves?

Yes, Tony Gwynn began his career with doubters regarding his ability to be a viable outfielder. Upon hearing the doubters and their “scouting reports,” Gwynn made sure they were silenced emphatically. He didn’t win his first Gold Glove until his age 26 season.

The main theme here is that Soto has time. Nothing about his career is written in stone and concrete, unable to be altered. He is too young and talented for that. Plus, given everything we know about Soto, he does not seem like the lazy, fielding-is-just-waiting-to-hit type. He strives for greatness. This can be another avenue toward achieving that goal.

Indeed, Soto needs to improve. With the Padres having World-Series-or-bust aspirations in 2023, they cannot afford to have him be a liability in the field. He certainly has time, but that time is now.

Native of Escondido, CA. Lived in San Diego area for 20 years. Padres fan since childhood (mid-90s). I have been writing since 2014. I currently live near Seattle, WA and am married to a Seattle sports girl. I wore #19 on my high school baseball team for Tony Gwynn. I am a stats and sports history nerd. I attended BYU on the Idaho campus. I also love Star Wars.
Tags: Gold Glove, Juan Soto, MLB, Padres, Tony Gwynn