The Padres were routed by the Marlins 9-3 on Sunday in the rubber match of their three-game set versus Miami. Starting pitcher, Matt Strahm struggled with leaving many balls over the heart of the plate and didn’t make it through five innings. On offense, the team only managed four hits, while leaving nine runners on base.

Coming into the series finale with the Marlins, lefty Matt Strahm had pitched well for the Padres throughout this season.

Although he didn’t walk any hitters in his outing, on Sunday, he struggled with keeping the ball in the zone. For the most part, his pitches were either well out of the strike zone, or caught far too much of the plate. It was a surprisingly disappointing start for a pitcher who has otherwise been a strong pitcher for the Padres this season.

Miami got on the board first in the second inning as Martín Prado hit a two-out single, followed by a 111.3 mph two-run home run off the bat of Jorge Alfaro to straightaway center field.

In the third inning, the Marlins added another run, as Garrett Cooper hit a laser over the wall in right-center field.

It took until the third inning before the Padres managed to come up with a hit, courtesy of this beautiful bunt away from the shift by Austin Allen:

Amazingly, that bunt hit wasn’t even the most eventful thing to happen during the bottom of the third inning. It has to be noted that there was also a delay due to a huge number of bees flying around the field at Petco Park, which is certainly something we don’t see every day:

After the beekeeper came out and took care of the Bees, the game was resumed.

In the fourth inning, the scoring continued for the Marlins as Jorge Alfaro once again knocked in two runs, this time on a double down the right-field line. This increased Miami’s lead to 5-0 through three and a half innings. The situation only worsened in the fifth inning, as Padres’ starter Matt Strahm was removed after only getting one out. Matt Wisler got the final two outs of the frame, but not before two more runs came in to score. Both runs were charged to Strahm, as he ultimately surrendered seven runs in 4.1 innings pitched with five strikeouts and no walks.

Although he pitched a clean sixth inning without allowing any runs, Wisler gave up two earned runs in the seventh inning to push the Marlins lead to 9-0. Things got a little better when Hunter Renfroe blasted a solo homer to the left field seats, making it a 9-1 game. Another silver lining included a solid eighth inning pitched by Trey Wingenter, who has looked sharp in his return from the injured list of late.

The ninth inning was thrown by Ty France, usually known as the Padres’ third baseman. It was certainly amusing to see him take the mound, especially because he was wearing Chris Paddack‘s ‘Relentless’ glove: 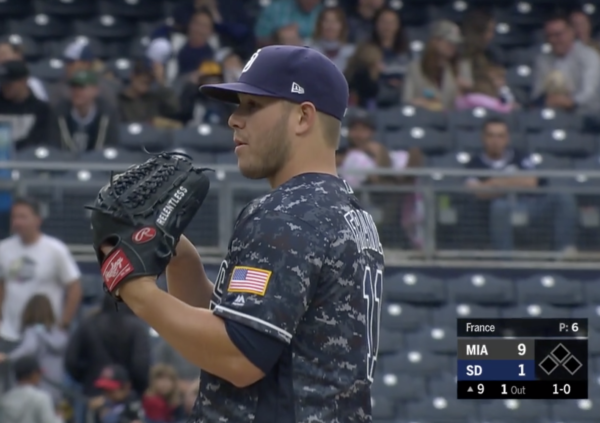 Nonetheless, it’s never a good sign when a team is losing and opts to use their position player as a pitcher because they have effectively given up on the game. That was exactly the situation playing out at Petco Park late on Sunday afternoon. Hunter Renfroe hit another home run in the bottom of the ninth to cut the lead to 9-3, but that was all the Padres would manage against Miami in the loss.

The most notable performers for San Diego were Renfroe with two home runs, and three RBI, Josh Naylor, and Austin Allen with a base hit each, as well as Trey Wingenter throwing an impressive eighth inning. Other than those three players, the team played horribly and below what they’re capable of. Manny Machado struck out in all three of his at-bats, while Eric Hosmer went 0-3. Likely the two best hitters on this team failed to produce anything of value aside from Hosmer’s walk, which never makes it easy for a team to win.

San Diego now drops to 30-29 on the season, and the team is now 10.5 games behind the Dodgers in the NL West. Having just lost a series to the worst teams in baseball in Miami, the Padres have a lot of work to do if they are to contend in 2019. In many ways, the team is lucky to be above .500, as illustrated by closer Kirby Yates‘ league-leading 22 saves. The team has enormous potential and has played the last month-plus without shortstop Fernando Tatis Jr. The performance of their pitchers has been deeply disappointing lately, while the offense has been average at best. As soon as the team shows flashes of being a real threat in the national league, they drop a series such as this one to a tanking Marlins team. On the positive side, at least we’re talking about a team that can be a contender, right?

A sophomore at Willamette University in Oregon, Conrad is majoring in Spanish but is also a writing center assistant for other students at Willamette. He has been a Padres die-hard his whole life and hopes to bring comprehensible statistical analysis to the site.
Tags: Matt Strahm, Matt Strahm Padres, Padres 2019, Padres vs Marlins, San Diego Padres

The Padres didn’t merely lose, they got spanked by the worst team in baseball!

It is PAINFULLY clear that Andy Green should be fired…yesterday.

This team is depressing.

Welcome to another year of trade deadline activity…on the wrong side of things.