Over the past half-decade, the San Diego Padres farm system has undergone a fairly drastic change. It is arguably at its weakest point in the past five or so years since it was ranked as baseball’s best in back-to-back seasons.

While the organization has been able to hold on to nearly all of their more elite-level prospects such as Abrams, Gore, Hassell, and Campusano, the once robust middle-tier of their system has been eroded by the many high and low-profile trades swung by general manager A.J. Preller in his bid to build a strong contender.

While some, such as outfielder Esteury Ruiz, have done more than their share to push their way into higher consideration in the Padres system due to their play, the system’s biggest shakeup will come during All-Star week starting on July 17th, which marks the first day of the annual MLB Amateur Draft. Luckily for the Padres, the 2022 draft class is particularly strong in the areas they will be picking in the first five rounds, especially in the first few rounds where the Padres hold three of the top 53 picks.

Let’s look at some of the more prominent yet still realistic targets the Padres can take with the 39th overall pick in Competitive Balance Round A.

Quick Note: This will be based on MLB Pipeline’s recently updated Top 200 Draft Prospects list. Different scouts and outlets have different rankings, so some names may be ranked differently elsewhere. Secondly, the MLB Draft is very unpredictable, so not only may some of these names go dramatically earlier or later, but the same may apply to other players with different rankings.

Should the Padres go another direction from Dylan Lesko at 15th overall, the likelihood of them taking another injured starter with their next pick would become more likely, and there may be no better target than Pallette.

Palette is a bit undersized, and his health is a concern after Tommy John Surgery put an early end to his 2022 season, but Pallette’s premium stuff speaks for itself. Before the injury, Pallete’s fastball sat in the mid-90s and touched 99 mph with heavy life in the zone. His low-80s curveball flashed sharp break and very high spin rates, with scouts considering it among the best-offspeed offerings of the entire class. Palette also features a decent changeup and is able to repeat his delivery and throw strikes.

Of course, why wouldn’t the Padres take a look at Jud?

Fabian has long received national attention for having one of the more unique blends of power and defensive abilities in the class. Despite the obvious differences in size and handedness, Fabian’s skills are similar to former Preller target Joey Gallo. Fabian’s bat speed generates impressive power from the right side. Like Gallo, Fabian sees more than his fair share of walks and strikeouts at the plate, posting an unimpressive .249 batting average his past two years despite his on-base percentage clearing the .400 mark in 2022. Fabian has shown impressive speed and skill in center field and will likely be able to stick there as at least an above-average defender in the future.

While the physical tools are certainly there for Fabian, he’ll need to become a much more consistent hitter to truly succeed at the major league level. 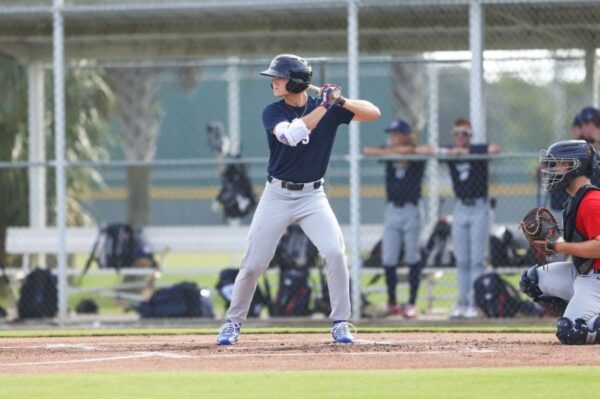 While Toman’s profile as a likely third baseman doesn’t make him the best fit, his undeniable offensive talent may see the Padres take him early on.

A switch hitter, Toman shares qualities with some big league switch hitters like Jose Ramirez and Bryan Reynolds, showing more bat speed and power from the left side while still being very capable from the right.

A fairly below-average runner, Toman’s defensive future is the main thing that draws concern from scouts. Many believe he has the arm to play third base, while some believe he could just as well profile in left or right field.

One of the biggest risers in the class, Harrington’s consistency with his fastball is the last hurdle remaining for him to be considered a much more legitimate prospect.

Harrington’s fastball velocity fluctuates in the 90-96 mph range, sometimes sitting higher and sometimes sitting lower but always with good carry through the zone. His mid-80s slider and changeup have both developed into legitimate put-away pitches, with the latter being the more impressive of the two while also mixing in a decent upper-70s curveball. All of Harrington’s offerings play up due to his above-average command and strike-throwing tendencies.

Harrington has the makeup of a solid starter coming out of college, but he’ll need to find consistency with his velocity before he can truly reach his ceiling.

While his smaller frame has concerned some, the pitch ability of Jacob Miller has undoubtedly turned many heads going into the 2022 draft.

Miller’s pitching arsenal may remind some of Padres starter Joe Musgrove. He sits in the low to mid-90s with his fastball, topping out at 97 MPH. Like Musgrove, Miller’s main selling points are his sliders and curveball, two high-spin offerings with a tremendous bite that dodge bats, with the curveball flashing plus over the slider.

Smith sits in the mid-90s with a heavy fastball that reaches 96 mph regularly and features plenty of run. He pairs this pitch with a breaking ball in the low-80s that flashes plus and keeps hitters guessing. Smith has a feel for a decent changeup but rarely throws it. He repeats his delivery well, but he has yet to find the consistency with his location to give him anything better than average command.

When asked what the most difficult pitch he had faced in high school competition, former first-round pick and current Diamondbacks farmhand Jordan Lawler gave the nod to J.R. Ritchie’s now well-known slider.

Ritchie, who draws occasional comparisons to Zac Gallen (another Diamondback), sits in the 92-96 mph range with his fastball and has been clocked in the 97-98 mph range with high spin and great riding life in the zone. While Ritchie has a solid feel for both his curveball and changeup, his put-away pitch is his high-spin, mid-80s slider that has missed many bats during Ritchie’s high school career.

Schultz catches plenty of attention from his towering frame alone, but scouts have become very familiar with him as of late for his trademark slider and wonder just how far it can take him.

Schultz has drawn comparisons to a young Randy Johnson as a hulking left-hander pitching from a low arm slot. His fastball usually sits in the low-90s but has reached 96 mph before, and Schultz also features a solid changeup to mix things up against right-handed hitters. The main attraction from Schultz is his extremely sharp slider in the high-70s that consistently features elite spin rates, helping it dart away from bats.

Schultz can repeat his delivery well enough to throw strikes and become a starter like Randy Johnson was if he is able to get his velocity up more consistently. That said, Schultz’s weapon of a slider at least gives him the floor of a high-leverage reliever in the mold of Andrew Miller or Brad Hand.