In my last piece, I wrote about Eric Show, and how he is rarely mentioned, despite being the franchise leader in wins, with 100.

In this piece, I will talk about another player who has one of the most extraordinary feats in all of Major League Baseball, yet it isn’t championed by the San Diego Padres’ organization.

Padres slugger, Nate Colbert, holds a record in Major League Baseball. On August 1, 1972, Colbert hit five home runs, drove in 13 runs and recorded 22 total bases. His five home runs tied Stan Musial, who hit five home runs during a doubleheader in 1954. His 13 RBI has been matched once, by St. Louis Cardinal Mark Whiten, but it still has not been beaten. It is still a major league record.

We all have been that kid who sat in the stands, or watched on television, and saw our hero do something extraordinary, then wanted to emulate them somehow.

On May 2, 1954, the St. Louis Cardinals played a doubleheader against the then-New York Giants at Busch Stadium in St. Louis. Stan “The Man” Musial had a colossal day, hitting five home runs during the twin bill. Musial hit three dingers in Game 1 of that doubleheader, followed by two more in Game 2, giving him nine RBI and 21 total bases.

Sitting in the stands was a young Nate Colbert, who told his father that, one day, he would do what Stan Musial did. Colbert later told the Los Angeles Times in an interview that Musial became his idol that day.

Fast-forward to August 1, 1972. By this time, Nate Colbert was a professional baseball player, playing for the San Diego Padres. The Padres played a doubleheader against the Atlanta Braves at Atlanta Fulton County Stadium. Colbert had nine plate appearances in those two games. He recorded seven hits that night, with two of those hits being singles.

In Colbert’s first at-bat that night, he walked up to the plate in the first inning with two men on base and nobody out. Dave Roberts and Larry Stahl drew back-to-back walks off Atlanta starter Ron Schueler. Colbert made Schueler pay for issuing two consecutive free passes, and sent a blast over the outfield fence for a 3-run home run. One home run, three RBI. 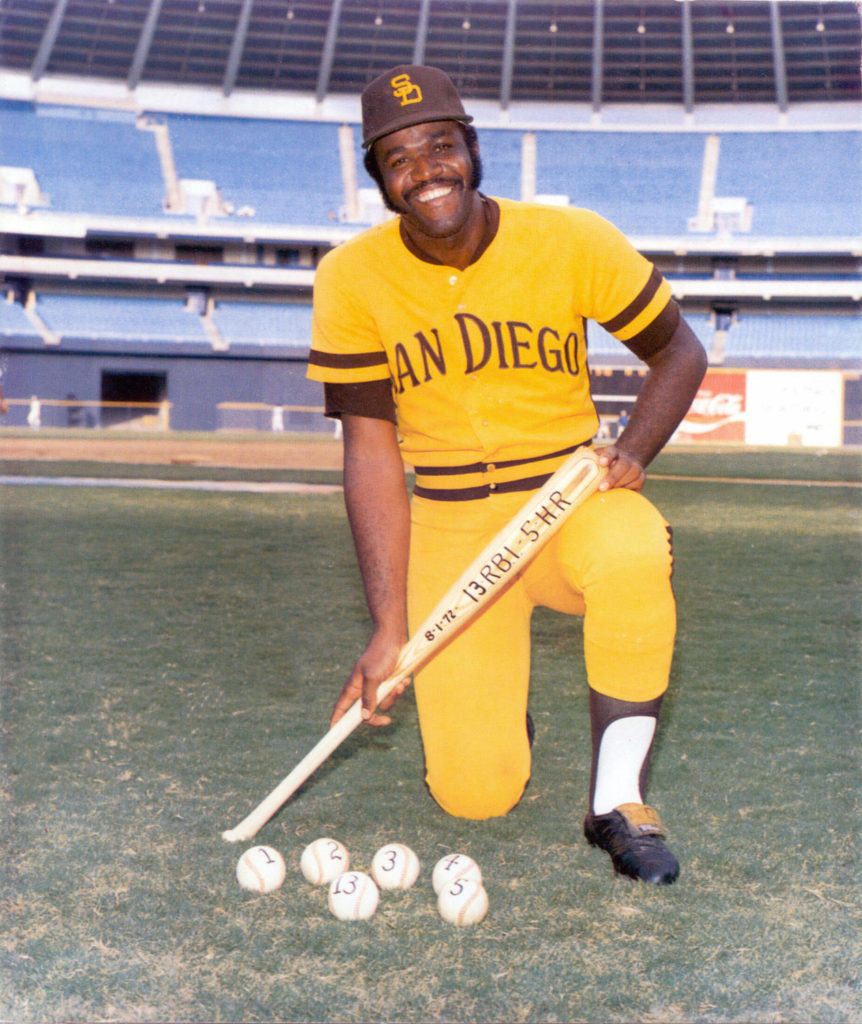 In his second at-bat, Colbert slapped a single that drove in Roberts in the third inning. Colbert had four RBI at this point. In the seventh inning, Colbert hit a solo shot for his second home run and fifth RBI. Two home runs and five RBI in one game is not too shabby.

However, Colbert was only getting started. In Game 2, Colbert belted three more home runs.

Colbert stepped to the plate in the second inning with the bases loaded. The Atlanta pitcher was Pat Jarvis. Colbert sent a pitch from Jarvis over the wall for a grand slam. Three home runs, nine RBI, and we’re not even done yet. In the seventh inning, Colbert hit a 2-run shot for RBI number 10 and 11 on the day.

He hit one more 2-run blast in the ninth inning to raise his RBI total to 13. Colbert tied one record and set another that day. He did what he said he would do 18 years earlier when he watched Stan “The Man” belt five home runs. After the second game had ended, Colbert went into the clubhouse and called his dad. He told his dad that he did what he said he would do after watching his hero do it, hit five home runs in a single day.

Colbert was a gifted hitter with a powerful swing. He hit 127 home runs in his first four seasons, 17 more than what legendary Hank Aaron had hit at that point in his career. Unfortunately, Colbert suffered from deterioration of the vertebrae, limiting him to just 46 more home runs over his nine-year career. He retired when he was 31 years old.

Why the Padres don’t celebrate this feat remains a mystery. The organization has retired six numbers, five if you don’t count Jackie Robinson.

Steve Garvey once sent the Padres to their first World Series when he hit a walk-off home run to extend the NLCS against the Chicago Cubs in 1984. His No. 6 has been retired by the Padres. The Padres have also retired Tony Gwynn‘s No. 19 (obviously), Dave Winfield‘s No. 31, Randy Jones‘ No. 35 and Trevor Hoffman‘s No. 51 (because, off-speed kills).

The Padres should consider retiring No. 17. It’s long overdue, and its a shame most Padre fans aren’t aware of what he did in 1972. It’s still a Major League record. That should be praised and celebrated by the franchise.

The Padres should really start celebrating their history. The organization has had players do extraordinary things, that they refuse to talk about.

The organization should reconsider and embrace the history of the Padres.

Mike is the sports editor for the Fayette Advertiser, and has been with East Village Times since 2015. His work has appeared on Bleacher Report. He is an avid Padres fan who is keeping the faith and trusting the process.
Tags: 1972 Padres, Nate Colbert, Padres, Padres Colbert, San Diego Padres, Stan Musial

Padres Down on the Farm: June 21 (Chihuahuas lose big to Sugar Land)