Padres closer Kirby Yates is a candidate for the inaugural All-MLB team, and it should be an easy decision for Major League Baseball.

Kirby Yates was the best closer in all of baseball from start to finish in 2019. He led all relievers in saves (41), ERA (1.19), and FIP (1.30) and also led National League relievers with a 3.4 WAR (FanGraphs). His astronomical ERA+ of 358 far exceeded even the prime years of Hall of Fame closers Mariano Rivera and Trevor Hoffman.

Yet, the disrespect keeps pouring in.

His only crime is that he was the most consistent player on a 70-92, last-place Padres team. He was not named Trevor Hoffman NL Reliever of the Year despite his 2019 numbers being better than the closer, after which the award itself was named. It went to Josh Hader for a second straight year. Sure, he was part of a playoff team, but his ERA was a run and a half worse than Yates’, his ERA+ was half as good, and his WAR was a whole win less.

Major League Baseball needs to correct this blatant oversight and give Yates the distinction of “All-MLB” closer.

The voting has two parts, one is the fans, and the other is a “decorated panel of media members, broadcasters, former players, and other officials throughout the game.” They will announce the All-MLB team during the Winter Meetings next week on December 10th.

They will select two relievers, regardless of league, so there is no National League versus American League drama here. This is akin to the National Football League’s “All-Pro” team, which is separate and more distinguished than the Pro Bowl selections. 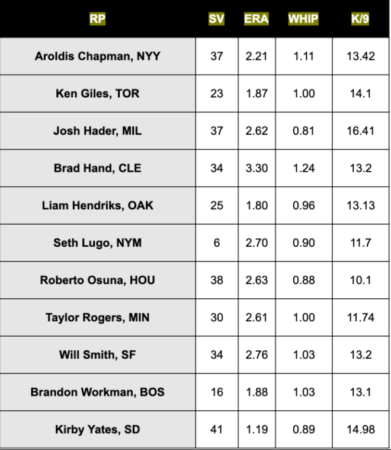 Kirby Yates was absolutely one of the top two relievers in all of baseball in 2019, and there is really no debate. Why should he be penalized for the Padres’ lack of ability to get on base or sustain good starting pitching? He saved 59 percent of San Diego’s wins. Without Yates, the lackluster season the Friars had would have turned into a top-five pick in this June’s draft.

San Diego finished the first half of the year .500 at 45-45. They are nowhere near that number without Yates’ mettle.

Padres players have been disrespected left and right among postseason awards. Austin Hedges and Hunter Renfroe both should have won Gold Gloves but received little consideration due to the “small market” perception of the Friars.

Major League Baseball and the All-MLB voters need to look past that and look at the facts; Yates is an All-MLB reliever. In fact, he should be first team All-MLB, as they announced there would also be a second team with an additional pair of relievers.

This award does not help the Padres win the World Series or push Yates’ career into Hall of Fame consideration. For Padres fans, their players must get the recognition they know they deserve. Padres fans are smart and know the numbers; they know the league. They see these players day in and day out and know when they stand out above the rest, and Yates did that tenfold during the 2019 season.

Native of Escondido, CA. Lived in San Diego area for 20 years. Padres fan since childhood (mid-90s). I have been writing since 2014. I currently live near Seattle, WA and am married to a Seattle sports girl. I wore #19 on my high school baseball team for Tony Gwynn. I am a stats and sports history nerd. I attended BYU on the Idaho campus. I also love Star Wars.
Tags: Kirby Yates, Kirby Yates Padres, Padres Kiry Yates, Padres MLB, Padres Yates