Mason Thompson was a Texas high school athlete, and with that comes a natural love of the University of Texas. He was committed to the university, and did so at a very young age. That was a dream place for him to pitch, but he chose to take his game to the professional level, as he knew the setting was right with the Padres. Mason talked to me about the University of Texas and here is what he expressed to me: “I grew up a lifelong Longhorn fan. I have been going to UT games since I was like three or four years old. My dad is a huge Longhorn fan. I have always been around UT, especially here in the Round Rock area, which is right outside Austin. As soon as I stepped on that campus as a freshman in high school, I knew it was for me. They did not have to sell me on the school.”

Despite his love of all things Texas, he decided to go down another path, as he accepted the Padres generous offer. That had to be a difficult moment for this young man and I asked him about that. He graciously discussed his thought process and how he came to the decision on becoming a Padre. “It really was two dreams of mine coming together. I lived for being a Texas Longhorn. It was a hard decision for sure. Talking to A.J. Preller and Mark Conner, and some of the other guys that are within the Padres’ organization, I just felt like it was a great fit. If there was ever an opportunity to pass up a chance to pitch at Texas, this was it. I could tell from the very beginning that this Padres’ organization is something very special. We really have a bright future with the core group that we drafted and signed and traded for. I could really see myself being in this organization and pursuing my baseball dreams and that was really it.” After years of tumultuous relations with their fans, its nice to see the Padres’ organization step up to the plate and build for the future. This influx of talent will surely lead to great things for this franchise. It will just take time.

After hearing Mason discuss his emotions about the team, I asked him his immediate reactions to A.J. Preller once the two started to communicate with each other. “He is a very intelligent man. He definitely cares a lot about the organization. He cares so much about the players, coaches, and everyone within the whole organization. That was one thing that really stood out. It’s a family. It’s more than just playing baseball. ” Again, the team has turned over a new leaf in regards to the relationships they build with their players. That will only help these players in their development.

The Padres have built themselves a very strong “family”. There will be plenty of competition at almost every level, and I asked Mason about that. I wanted to know his feelings about all the young arms around him, and how he has a chance to learn from many individuals with great baseball skill. “We have a great group. Its been fun getting a chance to grow with these guys so far. Competing will help us in the long run. Those of us that are fortunate enough to make it to the major leagues will have an advantage. I’d rather compete for a spot and try to get better each day than to just have a spot handed to me.” Words like this put a smile on my face. The man wants a chance to take the ball every fifth day, but in no way does he feel entitled to it. He wants to earn his keep, and a mentality and work ethic like that can only lead to good things.

In the AZL Rookie League, Mason got his feet wet in pro ball. That experience can be a joy for some youngsters, and an absolutely overwhelming experience for others. I was curious what he thought about the league and what surprised him. He appeared in five games and threw 12 innings for the team. He allowed eight hits and three runs while striking out 12 and walking five to the tune of a 2.25 ERA and a 1.083 WHIP. A very nice showing for a young man coming off of arm surgery. Mason discussed the league with me a bit. “My number one focus when I was throwing in the AZL league was to get some healthy innings coming off my injury. I was trying to get that feel back, while being able to compete again. When you are throwing bullpens and inter-squad stuff, you aren’t able to compete at the highest level. That’s what I really benefited from the most. The hitters and pace of play was a lot quicker than what I was used to. It was about adjusting.” The man performed well in his first little taste of pro ball. 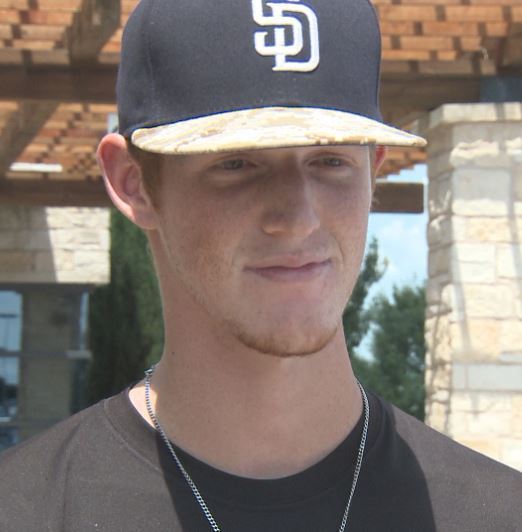 He had a chance to learn from some new coaches in the league and I asked him if anyone stuck out. “I built a great bond with Mark Prior. I also build a bond with Pete Zamora, who was our pitching coach in the AZL. You learn different things from different people.” Prior seems to be a common player that young pitchers have pointed out to me as a person of great importance to their development. He has been through a lot in his pitching career and I’m sure he can relate to these young pitchers. And there are plenty of young hurlers in the Padres’ farm system currently.

Reggie Lawson and Mason Thompson are two of the many young pitchers and they knew each other from their amateur days as Perfect Game All-Americans. They grew up with each other in a way, and I asked Mason what it was like to have a fellow pitcher, roughly the same age as him, to grow up in the organization. “We met at a young age and hit it off then. It is going to be fun playing on the same team as him. We are both fierce competitors. We enjoy competing. To have someone alongside you with similar skill set and similar background is really going to help us both reach our full potential.” The Padres did well by drafting these two young right-handed pitchers to feed off each other and push one another.

We talked about some goals for this young man. He is still only 19 and has a very bright future, but I just wanted to get an idea of what kind of expectations he has for the upcoming season. “Getting through a full season healthy is number one. I never had health issues prior to my Tommy John surgery. I’d love to get a full season in with no set backs. From there I would like to see where my ability and competitiveness can take me. I set goals but sometimes I believe goals can be limitations. I want to compete and build off this positive off-season I have had.”

I asked Mason about his repertoire on the mound. He is mainly a four-seam fastball pitcher. Thompson features a power curve and an excellent change, that is developing. In talking about pitching he made it clear to me that he likes uses his fastball and throwing off if it. He builds off of that pitch, and is certainly not afraid to challenge hitters. Without revealing too much, he has experimented with a few other pitches, but at the moment, he is concentrating at perfecting the three he currently has in his arsenal. The pitcher has plenty of time to work on his skill set. The Padres certainly did not draft Mason with intentions that he throws at Petco Park this year. It will take time, but once he fully understands his abilities and reaches his potential, the Padres will have yet another ace in their system.