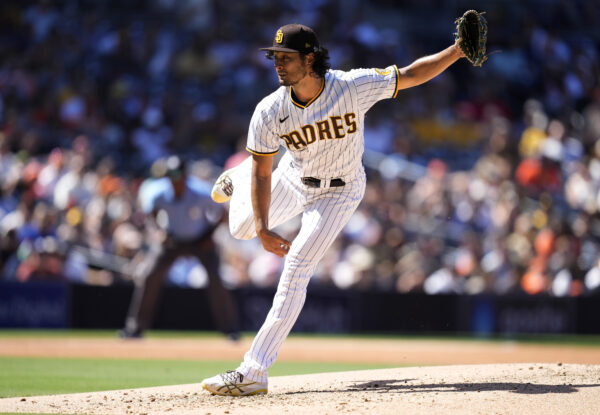 The San Diego Padres will need pitchers in the starting rotation beyond the 2023 season. It may be time to explore extending Yu Darvish, who may become a free agent at the end of the upcoming season.

In 2022, the San Diego Padres showed the baseball world their capabilities.

Even though the season didn’t end as the franchise wanted, it was still a very successful year for the Padres. The fanbase was reborn and energized by a year in which the Padres knocked off their division rival, the Los Angeles Dodgers, in the playoffs. A Dodgers team that won 111 games in the season.

It is an exciting time in San Diego, but there are some questions for the Padres regarding the future.

At this point, Joe Musgrove is the only pitcher signed beyond the 2023 season out of the big three pitchers that lead the Padres staff. Nick Martinez is also capable of starting, and his future has yet to be determined. Martinez may factor in the rotation in 2023 and beyond.

The Padres possess plenty of options on offense for the future but lack resources in the pitching staff.

Josh Hader, Blake Snell, and Yu Darvish are all set for free agency after the coming year. The Padres may elect to bring back Hader, but they have other options if they wish to go a different route with their closing situation. Snell is an enigma. The team will likely explore bringing back the southpaw, but Yu Darvish seems like the priority for the team.

Darvish will be 37 heading into his 38th year on this planet and is certainly not a young hurler. He has thousands of innings (2,789) on his right arm between Japan and the Major Leagues and has had Tommy John in the past. There are certainly risks if you are the Padres.

However, the veteran pitcher continues to shine. Armed with close to a dozen pitches, Darvish will have success at the major league level as long as his body holds up. There has never been a question about Darvish’s work ethic, so he is a safe bet to continue to perform at a high level for years to come.

So what would it take for the Padres to extend Darvish and how many years is sufficient?

Three to four years seems like a great starting point for the Padres, though Darvish will probably be looking for a five-year deal at the minimum, as this will likely be his last big multiple-year contract in the majors. Darvish signed a six-year contract for $126 million before the 2018 season and will easily earn at least $20 million on the open market, even given his age.

Some would argue that Darvish is pitching his best baseball at this point in his career. In baseball’s modern era, a pitcher that accumulates over 200 innings is rare, but Darvish totaled 194.2 for the Padres last year. He was able to gather those numbers as Darvish went deep throughout the year. The veteran knows how to utilize and maximize his pitch count.

Darvish may not have youth on his side, but he does also possess one of the greatest pitching minds in the game of baseball. He is a student of the game and is constantly looking for an edge to his craft when it comes to mechanics and training. The organization’s youth will benefit from seeing him go about his job daily.

The Padres will need to do something regarding the starting staff after next season. It may be time to extend Yu Darvish and solidify him as an essential member at the top of the rotation. The Padres are familiar with what he brings to the table. For Darvish, the pitcher would love to continue to witness baseball growing in San Diego. Perhaps one day, he will hoist a World Series trophy with the Padres.