Coming off  Tommy John surgery, this southpaw was highly valuable out of the bullpen for the Padres this past season. He made some useful spot starts as well, proving his versatility as a pitcher along the way. Let’s take a closer look at his performance in 2018.

When the Padres acquired Robbie Erlin back in 2011 for reliever Mike Adams, he was ranked as the 49th-best prospect in the league according to MLB pipeline.

Yet until seven years later in 2018, he never produced significant value for the Padres at the major league level. This past season, he posted career highs in appearances, games started, and innings pitched for the team. It was a breakout campaign at age 27 for the left-handed pitcher, coming off Tommy John surgery.

A key to Erlin’s strong pitching for the Padres in 2018 was his ability to walk very few hitters. He walked only 0.99 hitters per nine innings, which ranked as the lowest BB/9 ratio throughout his career thus far. It also ranked as the lowest mark among all major leaguers who pitched at least 100 innings during the season. When you walk the least number of hitters in baseball per nine innings, it’s a lot easier to be successful, as Erlin illustrated in 2018. With a career mark of 1.64 BB/9, it’s clear that Erlin should be able to keep walks to a minimum in the coming seasons. This is a sustainable part of his pitching, that will continue to benefit him.

In addition to walking very few batters, Erlin also made it highly difficult for hitters to go yard against him. His HR/9 ratio was also 0.99, as he only allowed twelve home runs all season. He allowed so few home runs using largely average stuff, as his fastball was clocked at an average speed of 90.4 mph according to Statcast. This was because he did a good job of locating his fastballs on the outer part of the plate, as this Statcast chart shows us: 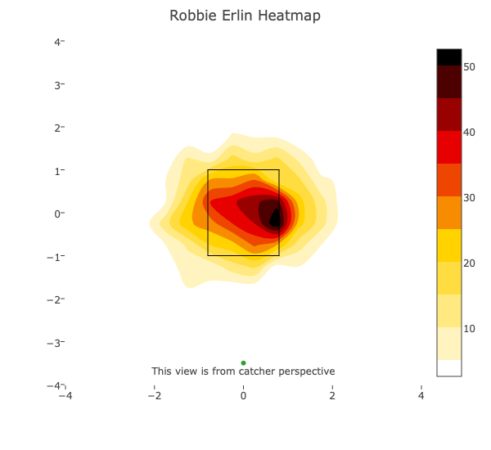 Getting batters to strike out has never been something Erlin has done well at the major league level, and this trend continued during the 2018 season. His 7.27 K/9 ratio was not very impressive, so inducing weak contact was certainly significant to his success in 2018. Furthermore, Erlin’s strikeout numbers didn’t get better over the course of the season — he struck out 7.67 hitters per nine innings during the first half, and it decreased to 6.87 after the All-Star break. The whiff rate of his opponents was only 20.8%, which was below average compared to the league rate of 24.9%, per Statcast.

Something else to note about Erlin’s profile is the fact that many of his Statcast numbers rated as league average, which doesn’t bode particularly well for his future prospects of repeating his 2018 success. The average exit velocity of batted balls against him was 87.5 mph — league average was 87.7 mph. With regard to his spin rate, Erlin has also recorded league average numbers. His fastball’s spin rate is 2277 rotations per minute, which rates just barely above the average spin rate of 2263 rpm. While it isn’t terrible that Erlin’s Statcast numbers are simply average, it makes us less certain that he’ll be as effective in 2019 as he was in 2018.

It was largely very encouraging to see Robbie Erlin stick around for the full season without spending any time on the disabled list in 2018. He finally showed the Padres what they had waited seven years to see out of him, in being a very useful reliever and spot starter. There are reasons to believe that he’ll be just as good, if not better in 2019, and there’s also plenty of logic behind predicting Erlin to take a step back from his strong 2018 campaign next year.

What we do know is that Erlin effectively used a five-pitch mix while throwing four of those same pitches at least 15% of the time. None of his pitches are going to blow by hitters, or elicit oohs and ahhs when he takes the hill, but Erlin maximizes his repertoire to keep batters off balance. He’s also a pitcher who limited walks better than any pitcher in all of baseball last season — only walking twelve hitters all year!

While it’s tough to project on a pitcher who didn’t strike out very many batters last year, there are certainly reasons for him to continue to throw meaningful innings for the Padres in 2019. Considering how successful he was out of the bullpen in 2018, it would be highly intriguing to see the team give him a real shot at winning a rotation spot in spring training this coming season. Given a full spring to get lengthened out, Erlin has a very legitimate shot to potentially lead a largely inexperienced Padres 2019 rotation. If the team fails to bring in any other starting pitchers, Erlin should certainly get every chance to start games at Petco consistently next season.