Padres’ outfielder Franmil Reyes is a big human being who has plenty of power potential. In his limited time with the Padres, we have witnessed him scald the ball all around the field. His Statcast numbers are certainly astounding and worth a further review.

Tuesday was a sort of coming out party for Franmil Reyes, as he went 3-for-3 with three runs scored, three RBI, and a walk.

We’ve seen him do some very impressive things with the bat at times, but he never did it with enough consistency for us to really take note of his performance until his outburst of hitting against the Brewers on Tueday. His three hits were hit at 97.8, 102.6, and 107.8 mph according to Statcast.

He has a knack for hitting the ball with serious oomph, and his big game provided multiple examples of his ability to do so.

The thing we have to remember is that Reyes hasn’t played very long in the big leagues, so we aren’t working with the largest sample size here.

Pitchers will make adjustments to him as they learn more about his strengths and weaknesses, and he will have to adjust to continue having success in the majors. Honestly though, the early results on Reyes’ batted balls are quite astonishing.

Here’s the Statcast ranking of batters by their average exit velocities, for hitters with at least fifty batted ball events: 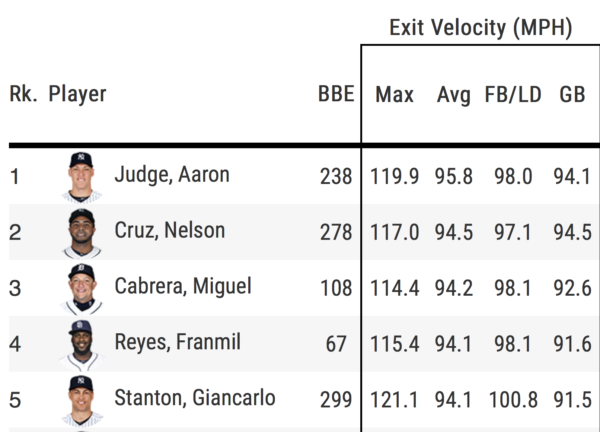 First of all, he’s especially good when getting his hands extended on pitches over the outside part of the plate. Take a look at the locations of his base hits: 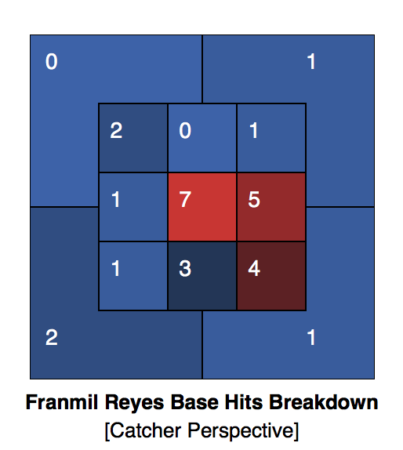 Reyes stands pretty far off the plate when he hits, and is probably trying to give himself plenty of room to get his hands extended on pitches. His ability to punish mistakes out over the outside part of the plate is pretty well documented at this point. He has himself perfectly positioned to put the barrel of his bat on pitches thrown towards the outside parts of the plate, which is why he’s been so dangerous against pitches thrown in that location. Where he’s standing in the box bears real resemblance to where Giancarlo Stanton puts himself at the plate, so take a look at a comparison of the two players’ locations in the box: 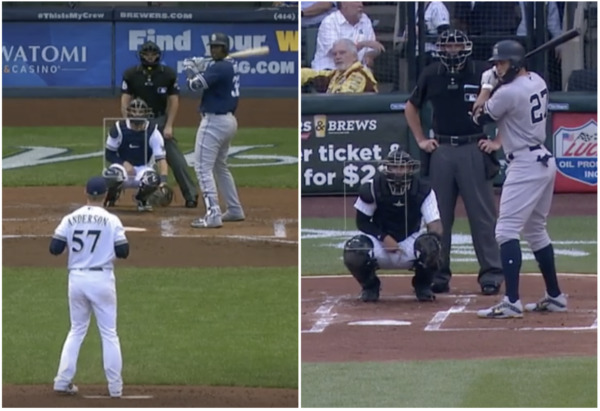 It’s pretty interesting that they stand in such similar places in the batter’s box. This is certainly not to say that Reyes is the next Giancarlo Stanton, to be clear. What we can say, is that Reyes has hit for similar power while hitting from almost exactly the same place in the batter’s box. There are similarities between the two worth talking about, and we have to remember that Reyes hasn’t played in enough games to trust the sample size. We just can’t ignore that Reyes is hitting the ball harder than Giancarlo Stanton is right now.

Furthermore, he’s been a dangerous batter because he’s getting hits that are all pretty deep in the outfield, which shows how powerful he is. Take a look at the Statcast fielding locations of his hits this season: 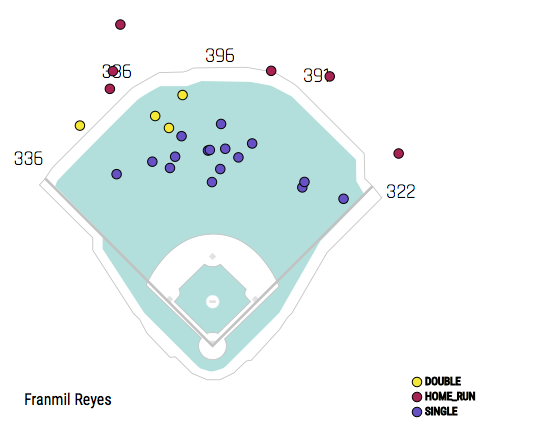 Clearly he can hit the ball a long way, as we saw the other day in his game against the Cubs, but even on singles he’s hitting the ball pretty far into the outfield. He’s also spraying the ball all over the field with consistency, which doesn’t allow teams to shift on him. He should have decent luck on batted balls as a result of this tendency, and it’ll make it harder for pitchers to target a specific location in the zone to attack because he can hit the ball to all fields.

When everyone in the Padres’ outfield is healthy, it’s crowded and difficult for some players to get regular at-bats. As 2019 approaches and the season winds down, Franmil Reyes may be getting the best chance he ever gets to stick around in the major leagues. He mashed in Triple-A with the Chihuahuas, and he’s shown an ability to do so with the Padres as well. If he keeps hitting the ball as hard as he has so far, he’ll have a great chance to be in the Padres’ lineup every day for a long time. It’s early, but Statcast is showing us that Franmil Reyes has pretty special hitting traits worth taking note of.

Not buying into either Cordero or Reyes at this point. If it was Stanton, would appreciate the statcast numbers…but the sample size is too small. Encouraging but small….Up until 4 days ago, Reyes was at .230 and missing a lot of fastballs. Looking to see more

Thanks for the excellent article, Conrad. You always do a lot of research and include a lot of interesting data. Learned a lot about Franmil — I hope he sticks around, but I suspect he will ultimately be trade bait for an AL team.

Thank you, Roddy! I really appreciate it. It will be very interesting to see if the team moves him or other outfielders this winter.