It is a beautiful day here at Balboa Stadium. The sun gleams off the faces of locals, interested to see what this new franchise here in America’s Finest City has to offer.

As head coach and general manager Sid Gillman leads his team onto the field, fans stand and cheer, aroused by the anticipation of this so-called “American Football League.”

Finally, it’s time for kickoff. It’s a decent return by the versatile Keith Lincoln, and here comes the hometown team’s offense, led by Lincoln and fellow back Paul Lowe.

They’re a dynamic duo, and a true force ready to take on opposing run defenses. They flex their muscles early in this one, but the team they’ve dubbed the Chargers can’t get on the board with their first drive of the game.

Now it’s the defense’s turn. However, a quick interception and long return by the shifty and opportunistic defensive back Charlie McNeil brings the offense and star wideout Lance Alworth back out onto the field. Calling a football player “Bambi” would often be seen as oxymoronic at best, downright delusional at worst. Alworth, however, is the deserving exception – quick, graceful, and elegantly athletic – and until a San Diego son rises to the top of the baseball world in a Padres uniform, Bambi is sure to be the most popular #19 in the city.

Luckily for the onlookers now fanning themselves in the stands, he flashes his talent once again, hauling in a short pass and letting his legs do the rest, weaving through defenders with an almost-unfair lack of effort. 7-0, San Diego.

Unfortunately, it is a lead short-lived, and soon enough, the team is locked in a 7-all draw. Head coach Don Coryell has to want to grab the momentum back now. Luckily, between the arm of Dan Fouts and the outstretched hands of Charlie Joiner and Kellen Winslow, this aerial assault has turned itself into one of the most powerful in the league. 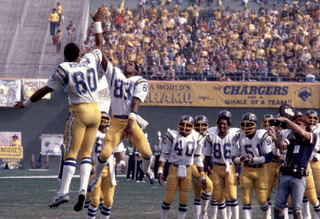 Those holding the power of a typewriter and the influence of media outlets looking to publish their work have even started to dub it “Air Coryell,” calling it the wave of the NFL’s passing future. In this case, it’s another clutch moment for the hometown team, attained via a masterful grab along the sideline by Winslow even as he battles through the physiological effects of a too-warm day at work. Looks like some of the players are helping him off the field now. What an effort; the powder blue-clad crowd filling Jack Murphy Stadium to the brim today will surely remember this one. A field goal follows, and the Bolts lead at halftime, 10-7.

And on we go to the second half. Again, though, the defense struggles, yielding two quick scores over the third quarter that result in a 20-10 reading on the scoreboard. Suddenly, fans are looking at their first deficit of the afternoon. It’s an imposing one as the fourth quarter now opens, and it could get worse, although the defense looks hungry to rebound and get the ball back in the hands of the Chargers’ potent offense. There’s the snap…the quarterback drops back…and there’s Fred Dean with the sack! Wow, what a powerful move by the defensive end! Gary Johnson and Louie Kelcher were right there as well. The Bruise Brothers at work again…

Qualcomm Stadium is really starting to shake now. The fans will be behind their team until the bitter end, it appears. Yes, America’s Finest City is known for its sprawling sands, but you have to hand it to this crowd for wanting to forgo the beach’s beckoning call in favor of a full day of football fandom. That most strangely endearing of songs echoes around Mission Valley…

Second down now. It’s a run…and the running back is leveled at the line! A punishing blow by Oceanside native Junior Seau. That guy has to be one of the hardest-hitting linebackers in the league right now. The amount of passion he brings to the gridiron on every down is nothing short of inspiring. You have to believe someday this man will play a role in getting this team to the promised land of football in February. Man, wouldn’t that be something…

Noah is a current undergraduate at the University of San Diego. In addition to his classes as a Business Economics student, Noah serves as the scouting director for the nationally-ranked USD baseball team and as an NFL correspondent with The Mighty 1090. You can follow him on Twitter @thebackseatlamp
Tags: Chargers, Chargers History, Dean Spanos, Los Angeles Chargers, San Diego Chargers
Pages: 1 2