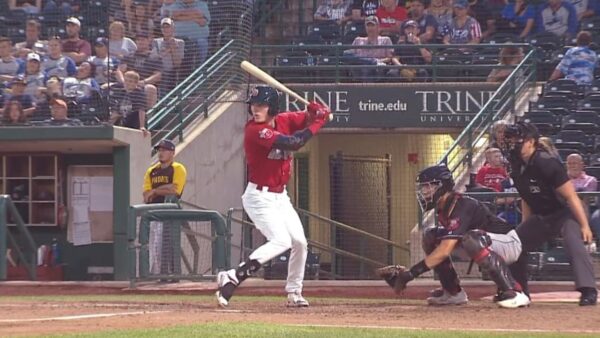 The Fort Wayne TinCaps finished a six-game series at Parkview Field with the Dayton Dragons.

Thursday’s game was highlighted by Blake Snell pitching a rehab assignment in Fort Wayne. The Cy Young winner threw four scoreless innings while striking out four allowing no runs or walks. Going into Sunday’s series finale, the TinCaps have dropped four of five games and been shut out three times.

This week the TinCaps will be making a rare trip to Wisconsin to play the Wisconsin Timber Rattlers. The Timber Rattlers are the High-A affiliate of the Milwaukee Brewers.  Travel time by bus from Fort Wayne to Fox Cities Stadium is five and a half hours.  Local time in Fort Wayne, the games will start an hour later, as Wisconsin is in the Central Time Zone.

Wisconsin is led by outfielder Sal Frelic.  He was a 2021 first-round, 15th overall pick out of Boston College. Frelic is currently ranked as the Milwaukee Brewers’ top prospect and ranked 68th overall in the MLB Top 100 Prospects. He currently is leading the Timber Rattlers in hits (19), singles (13), and stolen bases (6).

Fort Wayne also has a player on the Top 100 Prospect list in outfielder Robert Hassell III. He is currently the Padres’ second-ranked prospect and 35th overall.  Hassel III is leading the TinCaps in several offensive categories.  In Saturday’s contest with Dayton, Hassell III collected four hits and four RBIs. That performance raised his already impressive batting average to .408. However, not all his damage has been done with his bat. He is currently the team leader in stolen bases, with eight.  (4th in High-A Central)

Right fielder Joshua Mears has got off to a hot start in the home runs hit category for the TinCaps. Not only does he lead the team, but he also leads all of the High-A Central in home runs with seven total long balls. Mears has a MILB career .242 batting average, although so far in 2022, he is only batting at .204.

Starting pitcher Noel Vela has put up good numbers and results so far. He is leading the High-A Central with a 0.59 ERA in four starts.  This is a promising start to his 2022 campaign considering his career MILB lines are: four wins, 18 losses, and 4.03 ERA.  The great numbers this year have not come easily, though.  Vela looks to improve on his league-leading 13 walks.  The high walk percentage and the low ERA have him with an impressive 78% runners left on-base percentage.

This series’s first pitch will be at 7:40 PM EDT for games on Tuesday and Thursday. In comparison, the weekend games will begin at 2:10 PM EDT.  This will be the only series this year between the clubs.

I was born, raised, and still reside in the Hoosier state. I am a 2008 graduate of Ivy Tech Community College. I am married to my beautiful wife Kristen, father to Garrett, with another child on the way. A baseball enthusiast covering the Fort Wayne TinCaps, High A affiliate of the San Diego Padres.
Tags: Fort Wanye TinCaps, Fort Wayne vs. Wisconsin, TinCaps vs. Timber Rattlers