San Diego Padres’ prized pitching prospect MacKenzie Gore has a 1.76 ERA through his first three starts. Here is a closer look at the numbers and where he can improve.

MacKenzie Gore looked like he would spend another year in the minor leagues. The San Diego Padres‘ third overall pick in the 2017 MLB Amateur Draft looked like he was destined to grab the final spot in the rotation out of Spring Training, but the team’s acquisition of Sean Manaea put a wrench in Gore’s MLB debut. However, after Blake Snell landed on the injured list, the 23-year-old lefty got the call and made his debut on Jackie Robinson Day, striking out Ozzie Albies to open the game.

Gore leaned heavily on his patented fastball, accounting for 53 of his 73 pitches (73%) in his debut against the Atlanta Braves. He left with one out in the sixth innings, allowing just three hits, two earned runs, and fanned three. The Braves eventually learned to sit on his fastball, and Albies took Gore deep in the third inning. Into the fourth inning, Austin Riley doubled off Gore’s fastball, and Marcell Ozuna knocked him on, again, off a fastball.

“You can’t draw it up any better, other than a win,” Gore said of his debut. “But walking off the field with an ovation like that, in front of the home crowd — it was awesome.”

Gore’s turn in the rotation came five days later, and he had a much better outing against Cincinnati. The lefty featured more secondary pitches, but his fastball still accounted for 65% of his pitch total. He gave the Padres five strong innings, allowing four hits and two walks while fanning seven batters.

In his most recent start, Gore, again, faced the Reds at Great American Ball Park, a park known for being a launching pad. Gore leaned on his fastball but not as much as in previous starts, accounting for 59 percent of his pitch total. As a result, he reached a career-best ten strikeouts across five innings while yielding just one run.

Here’s a look at his first three starts by the numbers:

The Whiteville, North Carolina native, has featured four pitches. While his fastball has generated the most buzz among scouts, Gore’s three other pitches have been above MLB average in velocity. He has yet to showcase his changeup much, throwing it just 11 times across the first three starts. Of the 170 pitches, Gore’s fastball has generated just a .171 batting average and a 24.5% whiff rate. He’s done a job of challenging batters – blowing it right past them or painting the corners.

However, if there’s an area for improvement going forward, Gore’s fastball is finding too much of the strike zone. As noted, the batting average against is good so far, but as seen in his first start, hitters will learn to sit on his fastball, especially as teams get more tape on him. 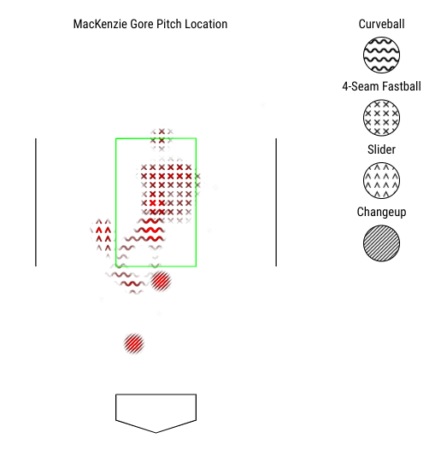 In his most recent starts against the Reds, Gore threw 27 sliders, accounting for 26% of his pitch total, which was the most of his young career. In fact, he had thrown it just 21 times combined between his two previous starts. He kept Cincinnati’s batting order off-balance, generating five whiffs and six called strikes on his slider.

“I think that’s one of those things you feel out a little bit as the game goes along,” Padres manager Bob Melvin said after Gore’s most recent start. “His fastball’s been there, curve [ball] sometimes better than slider, today slider really good … He and [Austin Nola] did a good job identifying what was working.”

“[With the slider] we made another step in the right direction, which is what we wanted to do,” Gore said. Threw some good ones [against the Reds], so overall, I thought the stuff was pretty good.”

In three starts, Gore’s slider is yielding a .250 batting average against, along with a 33.3% whiff rate and 20.7% putaway rate. He’s still looking to get comfortable with his curveball, which he’s thrown 34 times and produced a .667 average against.

While the Padres expect Mike Clevinger back into the rotation soon, Melvin said Gore would remain in the rotation and pitch Wednesday in Cleveland. If he can continue to mix in his secondary pitches, paint the corners of the strike zone with his fastball, and make his curveball an effective third pitch, MacKenzie Gore will make a strong case for the Padres to keep him in the big leagues once Blake Snell is healthy enough to return to the rotation.

If that’s the case, the Friars will have some roster shuffling in front of them or go with a six-man rotation for the time being.

Who do the Padres start in center field?