The early season returns have not been great to this point in the season. The San Diego Padres have struggled mightily to say the least. The pitching staff has been solid enough, but both the offense and bullpen have let the Padres, and their fans, down to this point.

Just three weeks into the season, things already look quite bleak in San Diego for 2016. All Star Game or not, fans are already looking towards 2017 and a hopefully brighter future.

One player that demonstrates the Padres season in a microcosm is Derek Norris. Beyond all the injuries and poor performance, Derek Norris was supposed to be a relatively sure thing. However, less than one month into the season, he has been just about the furthest thing from it.

Despite Norris’ successful first season in San Diego in 2015, the front office still went out and acquired a strong young catcher, in Christian Bethancourt, to be the team’s backup. This isn’t even mentioning Austin Hedges down in Triple-A El Paso.

With the injury to Hedges this weekend, a hand injury that will now require a surgery and a six to eight week recovery time, Norris is once again the man for the Padres, not that he ever really relinquished that title since joining San Diego in the winter of 2014.

With the injury to Hedges, the pressure on Norris is at least lessened, if ever so slightly. There still is the issue of Norris’ poor performance so far this season. And quite a poor performance it has been.

For comparison’s sake, Norris’ 2015 numbers are also shown in the above table. So far this season it’s pretty clear where the deficiencies lie at quick glance. At the plate Norris has been ineffective, hitting only one home run, striking out in more than a fourth of his plate appearances, and struggling to hit for either power or average, not to mention failing to get on base with any consistency. Add to that his wRC+ of 29, 71% off the league average player, and it’s pretty clear that Norris has been a disaster at the plate so far this season.

Over the course of his young career, offense has always been his strong suit, with defense lagging greatly behind. In 2015, Norris’ defense took a big step forward while his offense took a slight step back. It seems that effect has been even more pronounced so far this year, with Norris’ offensive profile declining precipitously, with his defense also taking a substantial hit as well.

Ironically enough, Norris is swinging at less pitches outside of the strike zone and more inside the strike zone, but he is still making less contact overall on both kinds of pitches. Even stranger, Norris is making less soft contact and more hard contact, and also hitting the ball with more authority overall, averaging a higher exit velocity than league average, as demonstrated by the chart below. 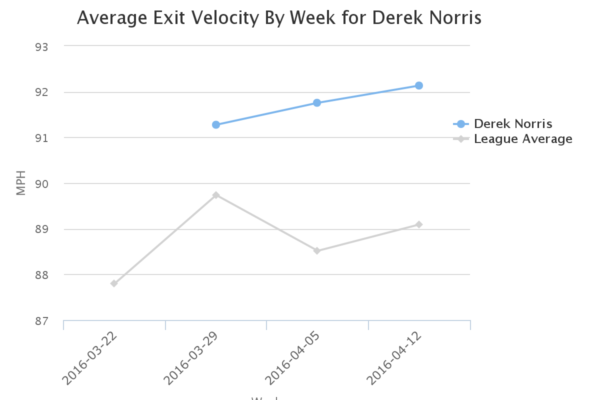 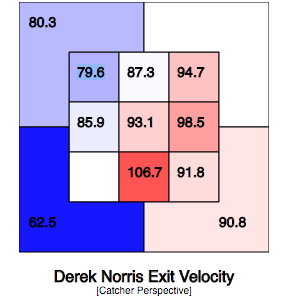 While the exit velocity numbers are at least somewhat encouraging, there is still some cause for serious concern. Most alarming of all, Derek Norris has been swinging and missing at a higher rate than in year’s past, most notably on off speed pitches. 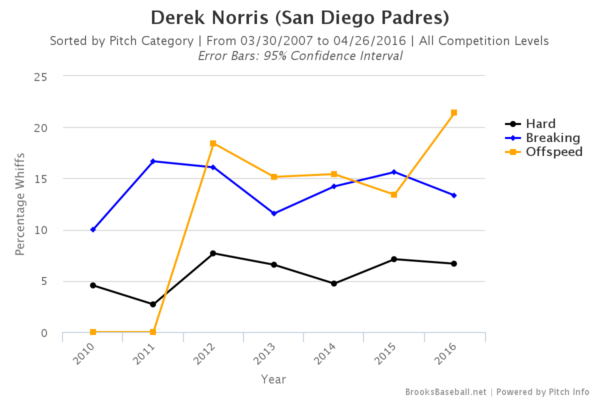 While Norris’ whiffs on hard pitches and breaking pitches are more or less the same, he is whiffing seven percent more on off speed pitches than he was in 2015. After cutting down on those whiffs in each of the past few seasons, that number has jumped to the highest point it has been at in his entire career.

Norris is making better contact overall in terms of his exit velocity, but he is making less of it, as the swing and miss in his game has expanded quite a bit. In fairness to Norris, he has hit into a lot of hard luck outs, as demonstrated by his sub-.200 BABIP, but the strikeouts and swings and misses are very real. It’s unclear if this is a huge step back for Norris or just a blip in the radar, but the early signs aren’t encouraging. After an offensive collapse in the second half of each of the last two seasons, it’s fair to ask more questions about Norris’ future. Regardless of that, and with the injury to Austin Hedges, Derek Norris is the Padres catcher of the future, for better or for worse.

Editorial and Prospect Writer for East Village Times. Twenty-five years young, Patrick has lived in San Diego for his entire life and has been a Padres fan nearly as long. Patrick lives for baseball and is always looking to learn new things about the game he loves through advanced stats.
Tags: Austin Hedges, Christian Bethancourt, Derek Norris, Padres Catchers, San Diego Padres