Is Joey Lucchesi capable of being the San Diego Padres’ #1 pitcher as the team heads into the 2019 season? With no additions in the rotation, it currently looks like he could be heavily counted on by the Friars.

The most valuable starting pitcher for the San Diego Padres last season was Joey Lucchesi, which was a pleasant surprise for a team in need of help in the rotation at the time.

Fast forward to the turn of the calendar and the beginning of 2019, and the same starting pitching need is present in San Diego.

There’s still time for the team to acquire better pitchers to help mitigate these concerns, yet the team has not taken any action to strengthen the rotation thus far. It’s looking increasingly likely that the Padres start the 2019 season with Joey Lucchesi as their #1 guy, which places a large amount of pressure on him, as well as the team.

Can a two-pitch starter help the Padres remain competitive in the NL West, as the team looks to improve on a 96-loss 2018 season?

Let’s begin by analyzing his consistency throughout the most recent year. Did he keep up the same level of pitching during the entire season?

Here’s a look at his FIP and K/9 numbers, game-by-game: 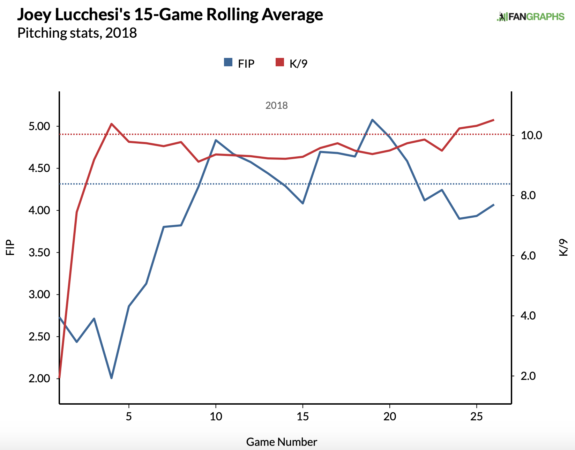 Lucchesi struck out hitters at roughly the same rate all year in 2018, yet his FIP rose concerningly during the majority of the year. Specifically, we should look at how his FIP increased from his fourth through twentieth starts, which is the most concerning part of the graph above. It’s well above league average FIP, as indicated by the blue dotted line on the graph. So his strikeout numbers were strong, culminating in a 10.04 K/9 rate this past season. He’s very good at striking hitters out, but we still need to figure out why his FIP increased significantly during the early-to-middle part of the season.

We’re going to first look at the Statcast batted ball data of the hitters Lucchesi faced. His opponents had a combined BABIP of .306, and we need to figure out whether they were getting lucky on those batted balls or not. The average exit velocity of balls hit against Lucchesi was 88.3 mph, at an average launch angle of 7.8 degrees. Across the major leagues, players hit .595 on batted balls hit at 8 degrees and 88 mph. So Lucchesi was pretty lucky to record a BABIP of only .306, which doesn’t bode well for his future performance.

Furthermore, Lucchesi’s opponents had a 6.0% barrel rate in their plate appearances against him. There were seven other pitchers who had the same rate of batted balls that were barreled up by hitters, who compare well to Lucchesi in many ways. They also say a lot about the kind of pitcher Lucchesi seems to be, based on his 2018 performance. Here are those pitchers, whose statistics are listed along with those of Lucchesi:

Aside from Madison Bumgarner, this is a pretty uninspiring group of pitchers whom many would consider as back-end major league starting pitchers. Lucchesi strikes out more batters than any of them do, but when it comes down to it, opposing hitters barreled up pitches he threw as often as they did against the pitchers in the table above. The Statcast data clearly indicates the similarity between Lucchesi and the aforementioned pitchers, which is not a good sign.

With the data above considered, it’s hard to see Lucchesi repeating his success from last season in 2019. His pitching was definitely highly valuable for the team in 2018, but that success doesn’t look sustainable. Considering that he is supposed to be the leading pitcher on the staff, at least as the season begins, it’s hard not to be concerned about Lucchesi. He’s always succeeded throughout every level of baseball he’s played at, which his career numbers support. Perhaps the young lefty can continue to have success because of his delivery and unique delivery, which have proved to be important parts of his pitching.

For the most part, it’s hard to believe in Lucchesi’s ability to repeat the success he had during the 2018 season. On a pitching staff in need of help, as it currently stands, it’s increasingly concerning that Lucchesi is a pitcher whose success appears to be unsustainable. We looked at his numbers and they clearly indicated to us that he’s not going to be a front of the rotation-type of pitcher.

That’s without mentioning the fact that he throws primarily two pitches — his sinker 63.4% of the time, and ‘churve’ on 35.8% of other pitches. Being reliant upon two pitches simply puts more pressure on him in the sense that his two pitches must be used to their full potential. Locating pitches is much more important for him because of his low-90 mph sinker, which leaves much less room for error in his pitching. These are some of the key reasons why his profile is riskier than the traditional starting pitcher, who often has three pitches, for example. While Lucchesi may be a decent pitcher, it’s probably best for the team to add some other starting pitching options so there isn’t as much pressure on the young southpaw.

A sophomore at Willamette University in Oregon, Conrad is majoring in Spanish but is also a writing center assistant for other students at Willamette. He has been a Padres die-hard his whole life and hopes to bring comprehensible statistical analysis to the site.
Tags: Joey Lucchesi, Joey Lucchesi Padres, Padres, Padres 2019, San Diego Padres

A rookie who threw 180 total minor league innings with a really lousy defense behind him (26th according to BR) & he sputtered out in September (typical of rookie pitchers) but still ended at 4 ERA. Look at his game log – 4 pretty bad starts out of 26 – 3 of them the home run seems to be the big issue. That is typical inconsistency of rookies. I feel optimistic that he will end 2019 below 4 ERA.. I don’t believe he will be a #1 SP any time soon but a #2 or high end #3 until he develops a 3rd pitch

He has used 2 other pitches in the past, so it’s possible that those 2 just weren’t ready for major league hitters. He was also a rookie, and most pitcher’s see at least minimal improvement after their rookie years.

the .6 average against his average velo and angle of hits is apples and oranges. You compared balls in plays that went for hits average velo/angle, vs what the league did on average in those stats (.4 worse in that case since his registered hits against him obviously had a 1.0 average).

League average BABIP is about .300 as well, so it doesn’t seem like he actually got lucky within that single stat.

Love your writing, keep it coming, the stats side of this one (Unless I’m reading what you said incorrectly) is just a bit inconsistent to support your conclusion. That isn’t to say there isn’t information that does and perhaps i just read it wrong and you were spot on.

That would be pretty pathetic if Lucchesi is the leader of our pitching staff. I’m not saying he isn’t talented but, come on, really?

An ERA over 4 pitching half your games in Petco isn’t overly impressive so if he can’t even sustain that look out. Hopefully he can do a better job with location and maybe develop a third pitch.