The 2018 season for the San Diego Padres provided some positives despite another losing record. Here are three statistics to be content with as the Padres look to grow even more in 2019.

It is a new year and a very good time to look back on another year of San Diego Padres baseball.

Amid all the negativity we can obviously feel when discussing the team, we should also think about the positives to be taken away from 2018.

After all, the Padres still have a multitude of reasons to be optimistic as we celebrate the arrival of 2019. Here’s a look at three 2018 statistics that the Padres should be pleased with, and that also provide optimism for the team’s future:

Leading a fantastic bullpen performance for the Padres in 2018 was Craig Stammen, whose 2.3 fWAR ranked fifth-best among all major league relievers.

It was the highest fWAR figure on the entire Padres’ team! That’s also higher than the individual fWARs of Craig Kimbrel, Aroldis Chapman, and the Padres’ own closer, Kirby Yates. He established himself as a highly trustable option for manager Andy Green out of the bullpen, also pitching an impressive 79 innings in doing so. With an increased sinker velocity from last season, Stammen turned in a career year. 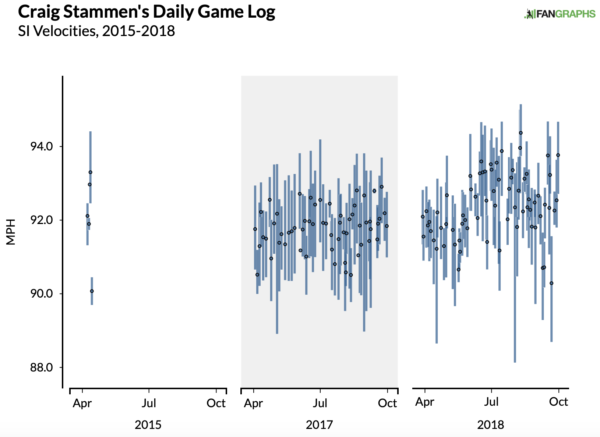 This increase in velocity helped Stammen to record the lowest barrel percentage on batted balls hit by opposing batters on the Padres’ pitching staff. In only 2.8% of opponent’s plate appearances, did they ‘barrel up’ the pitches of Stammen. In other words, the hitters Stammen was facing very rarely made hard contact with the pitches he threw. Considering how poor the team’s rotation was in 2018, we can be thankful that Stammen so willingly pitched well for the Padres out of the ‘pen. Although his ERA was 2.73, his FIP of 2.19 suggests that he pitched better than most give him credit for. With that in mind, we can be pretty sure that his 2018 season was not a fluke, and expect more of the same high-quality relief from him in 2019.

While it was a rough year at the plate for Manuel Margot, and a disappointing season as a whole for him, he did rank 8th among all major leaguers in outs above average. This is a Statcast measurement of fielding performance for players that gives them credit for making outs based on the difficulty of the plays they made. Red Sox center fielder Jackie Bradley Jr., the winner of the 2018 AL gold glove as a center fielder, only had a mark of 11 ‘OAA.’  That gives you an idea of how impressive Margot’s mark of 12 ‘OAA’ truly was in 2018.

Furthermore, Margot caught 87% of batted balls hit to him, which equaled that of 2018 gold glove winning outfielders Mookie Betts and Corey Dickerson. By multiple Statcast measurements, Margot is a Gold Glove-caliber defensive center fielder. Here’s a look at one of his impressive catches this season, on a ball that many center fielders wouldn’t have reached:

Guess who ranked 11th in all of baseball in his average fly ball and line drive exit velocities?

Hunter Renfroe clearly has a knack for hitting baseballs with serious force, as the aforementioned batted ball types were hit an average of 97.4 mph, according to Statcast. Want to know who else recorded the same average exit velocity on identical batted balls? The Nationals’ 19-year-old phenom, Juan Soto. For reference’s sake, Aaron Judge recorded an average exit velocity of 97.7 mph on his own fly balls and line drives. Renfroe’s in pretty good company, when we examine his Statcast batted ball data.

Remember the barrels percentage per plate appearance we mentioned when discussing Craig Stammen earlier? Renfroe paced the Padres with an 8.4% barrel rate in his plate appearances, which ranked 24th among all qualified hitters. His barrel rate was 6.9% in 2017, which shows that he definitely improved in his second full season. He also upped his walk rate, while lowering his strikeout rate; further signs of his development in 2018. The Padres clearly have an outfield logjam, and considering how well Renfroe hit the ball in 2018, they should seriously think twice before trading the young right fielder. He may just be starting to find his stroke in the big leagues, which may lead to an exciting 2019 year for him.

It’s been a busy year for the rebuilding Padres, and those were some of the statistical highlights we saw during the team’s season. The numbers used above indicate that there are better times ahead at Petco Park, as illustrated partially by the three aforementioned players. While in a few years we may simply want to forget how 2018 made us feel as fans of the Padres, we should always remember the positive things the Padres accomplished this season.

Thank you for reading my work this year, and Happy New Year!

A sophomore at Willamette University in Oregon, Conrad is majoring in Spanish but is also a writing center assistant for other students at Willamette. He has been a Padres die-hard his whole life and hopes to bring comprehensible statistical analysis to the site.
Tags: Craig Stammen, Hunter Renfroe, Manuel Margot, Padres, Padres 2018, San Diego Padres