The San Diego Padres need a third base option for 2019 and free agent Mike Moustakas could be an interesting choice for the team. Here is a statistical analysis of the power-hitting third baseman:

Yet another option for the Padres to consider, in filling their void at third base, is Mike Moustakas.

He began last season with the Royals and was traded to the Brewers before the trade deadline in July.

After a strong start to the year with Kansas City, in which he was worth 1.7 fWAR, Moustakas only mustered 0.7 fWAR in value with the Brewers, albeit in about half as many games.

His hitting production only slowed marginally after the trade, but his defense was negatively rated in Milwaukee after it was rated as above average for the Royals to start the year.

Here’s a chart that gives us the specific details of what was described earlier, courtesy of Fangraphs:

So while his offensive production didn’t decrease significantly, he did strike out noticeably more often with the Brewers, compared with his strikeout rate while playing for the Royals. Perhaps this is something explained by Moustakas simply playing against lesser competition in the AL Central division with Kansas City, a division which the Indians effectively had sole control of, for the entire season. Regardless, his performance throughout 2018 as a whole gives us a good idea of the kind of player he should be moving forward. His overall value is illustrated well by this chart generated by Fangraphs: 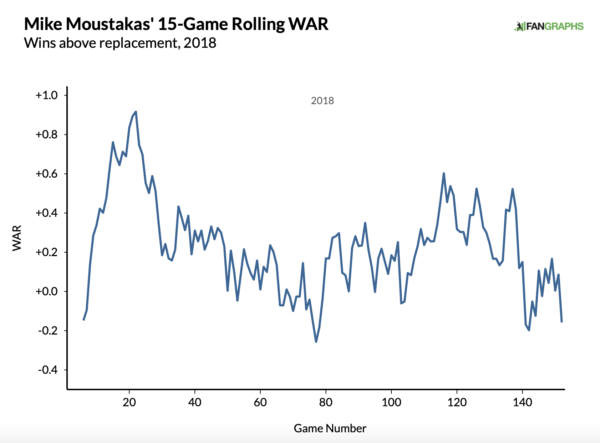 Basically, throughout last season, Moustakas started off really well, fell off a little, and then his performance tapered off eventually. He wasn’t getting any better as the year came to a close, but overall, was useful enough to still be slightly above average.

His last two seasons produced 2.1 and 2.4 fWAR, which makes him a slightly better than an average third baseman. Considering the fact that Christian Villanueva was worth 1.2 fWAR last year, signing Moustakas would almost certainly be an upgrade at the position for the Padres.

It is also worth discussing the fact that the Padres received very little production from left-handed hitters last season in their lineup. Moustakas hit 22 of his 28 home runs last year and knocked in 67 of his 95 RBIs against right-handed pitchers. He would help the team improve the lineup, and be a strong left-handed presence versus righties as well. The top two fWAR figures produced by Padres position players last season were Wil Myers and Hunter Renfroe, at 1.6. Clearly, the lineup needs improvement — which Moustakas can certainly help with.

Something else to note about Moustakas is that he has become more adept at hitting the right pitches in the strike zone. Since the 2015 season, he has hit more pitches over the heart of the plate than ever before in his career. Take a look at the pitch locations of his hits in 2015, 2017, and then 2018, in that order:

We didn’t look at the data from 2016 because Moustakas only played in 27 games that year, and thus it’s too small a sample to put much stock into. Obviously, he did a much better job of selecting middle-in pitches in 2018 than in previous seasons.

There’s evidence to suggest that Moustakas took a step forward last season, which is encouraging for him, especially given that he is thirty years old now. His newfound increase in walk rate to 8.7% with the Brewers to close last season shows that he has developed a better eye for pitches thrown to him recently. This is a learned veteran hitter, according to the numbers we’ve looked at.

While it would not be the most exciting signing if the Padres were to sign Moustakas, it would definitely improve the team. Last season, the team ranked 28th in runs scored, dead last in on-base percentage, and 28th with a team wRC+ of 84. Plus, he certainly gets along well with Eric Hosmer, considering all that they went through in Kansas City.

His veteran presence would presumably bode well for the young Padres team, along with Hosmer, for what it’s worth. For all the public criticism of Hosmer recently, the players in the clubhouse clearly like him, which has more value than we can publicly understand.

Recent trends in free agency indicate that the middle-class of baseball players are struggling to be well-paid. Teams are more interested in using team-controlled, younger players than they are in signing a more expensive veteran to fill their holes. Moustakas is precisely the middle-tier kind of player who has had trouble being paid well for his services. With many larger market teams already set at third base, and teams expressing more interest in Marwin Gonzalez and Jed Lowrie, Moustakas’ price very well may come down as the winter goes on.

San Diego should be motivated to add a player such as Moustakas that shouldn’t be too expensive. Especially if a guy like Moustakas is still available in late January or February, GM A.J. Preller should jump at the chance to bring in a solid contributor that ‘Moose’ is. More than anything else, the stats listed above are the reason the team should bring him in.

A sophomore at Willamette University in Oregon, Conrad is majoring in Spanish but is also a writing center assistant for other students at Willamette. He has been a Padres die-hard his whole life and hopes to bring comprehensible statistical analysis to the site.
Tags: Mike Moustakas, Moustakas Padres, Padres 2019, Padres third base, San Diego Padres

2 thoughts on “A Statistical Analysis of Free Agent Mike Moustakas”