Shortly after the San Diego Padres hired A. J. Preller as general manager, he orchestrated trades and acquisitions that included 20 players in just three days.

Myers is the last of the bunch to leave. The Padres declined to pick up his $20 million option for 2023, and Myers agreed to a much less lucrative one-year $7.5 million contract with the Cincinnati Reds.

General manager Nick Krall regards Myers as a “quality outfielder who can hit, has some pop in the middle of your lineup. He’s a solid, everyday player.”

Baseball America had identified Myers as “one of the draft’s safer hitters, with a smooth swing he repeats and quick, strong hands….with the bat speed and leverage to produce future power.” That same report suggested he could play all over the field, a mindset the Padres also adopted, to the detriment of both the team and the player.

In 2017 the Padres signed Myers to a six-year, $83 million deal, declaring him the face of the franchise. At the time, Jacob Shafer of bleacherreport.com wrote “Wil Myer’s 6-Year Extension Cements Franchise Cornerstone for Padres’ New ERA.” According to Shafer, Myers had been a “talented, injury-prone enigma” when the Padres signed him in 2014 but had proved his worth. 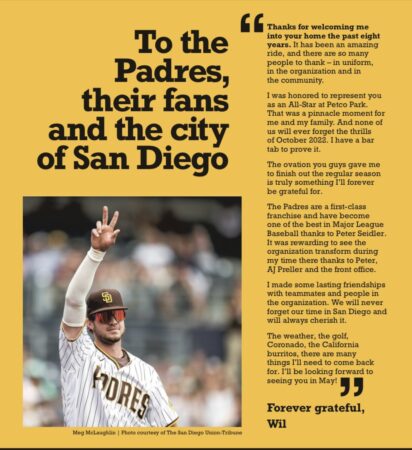 In 2016 and 2017, Myers played a total of 300 games at first. Despite already having a first baseman with a hefty contract by Padre standards, Preller pivoted and acquired first baseman Eric Hosmer for $144 million in February 2018. Thus began a journey around the diamond for Myers, the 2013 American League Rookie of the Year and 2016 All-Star.

At the time, Padres co-owner Ron Fowler remarked that Myers didn’t seem to want to be the guy or a leader in the clubhouse. The following season Myers played 41 games in the outfield, mostly in left. Then the team decided to move him to a position of more need, third base, again falling back on their belief his athleticism would carry him through another change of position. Myers bulked up to 227 pounds to play third, which may have contributed to his injury woes that resulted in three trips to the disabled list. At the end of the season, all parties agreed the third base experiment did not go well.

In 2018, during yet another losing season, Myers reached his low point in San Diego. He expressed his displeasure to Carlos Asuaje during a game of Fortnite. “The Padres are doing cutoff and relays tomorrow at 3 o’clock—in December, Dude.” Unfortunately, Asuaje had been streaming the dialogue, and Myers apologized profusely to manager Andy Green.

“I love Andy, and I love playing for him,” Myers told reporters, “He’s a guy that has taught me a lot in this game. At times, you get into a mood where you get frustrated, no matter what’s going on with a team or individually, and you say some things you shouldn’t say in a conversation that you think’s private. The reality is, now we’re in 2018. … I’m incredibly sorry, obviously to Andy, to my teammates, to the fans. This is a distraction we don’t need.”

Ironically both the Myers and Hosmer contracts weighed the Padres down, and it was no secret that Preller tried relentlessly to move either one or both of them. This year he succeeded. However, the Padres will be on the hook for approximately $44 million of Hosmer’s contract.

Wil Myers will make less money, but he’ll be wanted. He could have fled Southern California and his mixed memories without a word to anyone. Instead, he wrote a moving goodbye to the team, the fans, and the city.

Baseball has been a part of Diane's life since her father played professionally (mostly at the minor league level). She has written for a number of publications and concentrated on companion animal welfare. She welcomes the opportunity to write about the sport she loves. Diane shares her home with her husband and a house full of rescued animals.
Tags: Padres MLB, San Diego Padres, Wil Myers