In 2015, Myers was the Padres’ starting center fielder on opening day; a position he never looked comfortable in.

He hit the DL in early May with tendonitis and missed a month.

He returned three days in June and then went back to the DL because his wrist continued to bother him. He eventually had to have surgery on his wrist to remove a bone spur irritation in the tendon. The fear that he wouldn’t be able to stay healthy was looking like a real possibility. He returned to play in early September, spending more time at first base, where he actually looked promising. In 60 games, he hit eight home runs, 29 RBI, and slashed .253/.336/.427.

At this point, nobody was mistaking him for a team leader. He was still a kid; under the wings of Kemp and Upton in the outfield. And then something happened prior to the start of the 2016 season that kicked Myers into gear. His breakout was about to begin.

His outstanding first half landed him a spot on the MLB All-Star team as the starting designated hitter for the National League. He also participated in the MLB Home Run Derby. As far as leadership goes, he was definitely growing into it. It seems that as his confidence in the game was increasing so was his willingness to step up as the face of the franchise. He took on the role of ambassador for the Padres during All-Star week and it suited him. Although he had gained the admiration of fans and the attention of the front office, during the second half of the season, he fell back to earth, which exposed some areas of needed improvement. 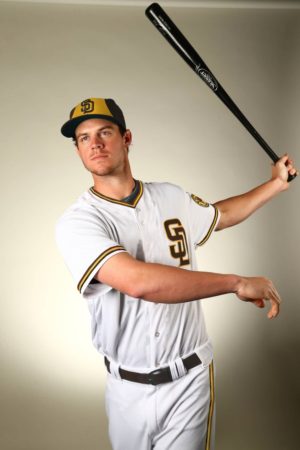 So is Wil Myers the face of the San Diego Padres? Here’s how I see it: On January 17, Myers finalized his new contract with the Padres who are paying him $83 million over six years; the largest contract in franchise history. If the Padres expect to begin winning in 2019 and Myers is signed on until 2023, it looks like he is definitely factored into the plans. He’s got an extremely likeable personality, and he always looks like he’s having fun on and off the field. He was a legitimate all-star last season, and he is showing signs of solid leadership development. In 2017 he has set a lofty goal for himself to steal 40 bases and hit 40 home runs. At the moment, he is batting .400 in spring training with two home runs and three stolen bases so he’s keeping up the pace. If you ask me, nobody could be a better representative of the Padres than Wil Myers. He is indeed the face of the franchise, and the San Diego Padres are surely pleased about that.

Baseball is the second most beautiful art form in my opinion. The first is what God does with our San Diego sunsets. Football's pretty exquisite too. I'm Sarah's husband and a Cal alum. I have been a Padres fan since childhood. My first experiences were at the Q watching Tony and the crew in the 90's. I love sports and I love San Diego. I hope you enjoy my thoughts!
Tags: A.J. Preller, Face of the Padres Franchise, Padres, Padres 2017 season, Padres Myers, San Diego Padres, Wil Myers
Pages: 1 2