But yet, seemingly every year, Padres management remakes the jerseys with a stale boring look. A once unique franchise now resembles that of dozens of professional sports teams with the blue and white color scheme. It’s not the color blue and white that is the issue, it’s the fact they accent the colors with sand, yellow, grey, etc… Continually changing the colors of the uniforms only shows the instability within the organization. Especially when they ignore the outcry from the fans and what they desire.

Recently Ron Fowler did a local podcast in which he proclaimed that the fan base does not want brown uniforms, and he has studies that prove so. He might have a case in stating that some people do not care for the brown, but to say the majority of the fans do not want the change is just plain wrong, and frankly, its crazy talk. The fans want the exact opposite.

In the past I couldn’t care less about the color of the uniforms. I, like Fowler, was more concerned with the product on the field, and mundane details like color schemes and fonts are irrelevant and topics of discussion that only losing teams’ fans debate about. In recent years, the constant changes in colors and jerseys has driven me crazy though.

To start the 2016 season, the Padres wore five different jerseys in six days. I wrote about it here. That is just mind-blowing and completely uncalled for. I get it. Baseball is a business and new uniforms mean brand new revenue for the club (as the fans want the new merchandise with new color schemes and such). However you have now gone to that well for water far too many times, and it is currently bone-dry. One more miscalculated change in uniform styles will condemn this franchise to mediocrity, and the ownership group needs to understand this.

The Padres name comes from the Spanish Franciscan “fathers” who founded San Diego in 1769. These friars wore brown robes, and that is well documented. When you think of these recognizable figures, they are always wearing brown, so it was natural for the original MLB team in San Diego to adopt a brown color, wasn’t it?

The early 70’s Padres’ uniform were obviously unique and gave the team a sense of identity. If a baseball game was on TV across the room, you knew immediately when the Padres were playing.

The brown was removed altogether and replaced with blue and orange for the 1991 season. The new Padres’ ownership group, at the time, claimed that native San Diegans did not want the brown uniforms and chose a navy blue to represent the high Naval influence in the San Diego area. The orange was the first of dozens of alterations to the blue and white uniforms. Honestly, the first couple of uniforms with the pinstripe white were pretty nice. Instead of leaving it there though, the team has gone crazy with their constant changes. From all sand road uniforms, to ugly wave-like fonts in the Padres name across the players chest, they have always done things tragically wrong.

It’s not just the locals that want the brown to return. From The Sporting News to ESPN to USA Today, the national media has been on board in the demand for the brown uniforms, and they have written extensively about it. You cannot continue to deny what is inevitable. The team should be in brown, and we all know it is going to happen eventually. The team has already caved in and provided weekly games in throwback uniforms. They understand the demand. They see the fan base excited for these nostalgic games. But yet, the ownership group continues to bury their head in the sand about the issue long-term, and it needs to stop.

The late 70’s and early 80’s uniforms were loud and obnoxious. The fans enjoy seeing them in a small sample sizes, but a whole season wearing 1978 uniforms might be too much. The fan base understands that, but in this day and age, why can’t we have a compromise? @BBTB2018 (Bring Back the Brown 2018) has designed some exceptional concept jerseys and the club should run with their idea. Take a look for yourself if you haven’t already. While I am not sold on their design entirely, it is far and away better than anything the Padres have produced in quite some time.

So why does Ron Fowler hate the brown? 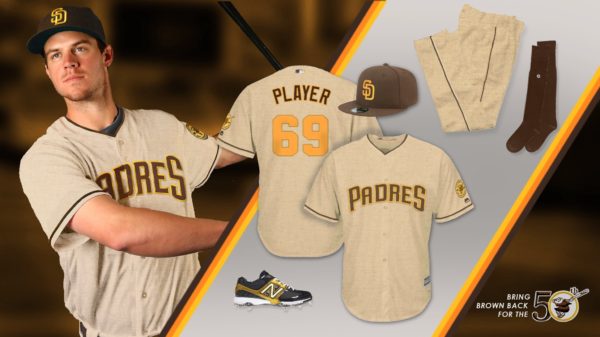 I don’t think he does necessarily, but he obviously is concerned with other issues on the team. There has been plenty to worry about with this franchise and that is understandable. Uniforms are just not the most vital of things when you are talking about changing a culture of a losing franchise.

I like Mr. Fowler. I really do. He has passion and he loves the city of San Diego. That goes a long way. The team is in the process of surrounding themselves with personnel that can contribute in a positive manner. It goes far beyond baseball. Former team president Mike Dee was let go for a reason we will probably never know, but his release signifies that the team is evaluating itself internally. There are high level people with inflated positions within the Padres organization that need to recognize the tradition of this franchise. Ignoring the fan base will only condemn their tenure with the team, and they will be found out eventually.

The Padres are about to become a very relevant team in MLB. Their farm system signifies that an exciting period of Padres’ baseball is near. Providing stability with a fresh new brown uniform scheme (that you stick with for the long-term) will definitely help usher in a new era of Padres’ baseball. Baseball is like life and the Padres shall circle-back and return to their roots. Ron Fowler can only hate the brown for so long. The team will have to give in eventually. Then we can all bask in the “bring back the blue” movement which is sure to surface. Just wait for it. You know it’s coming.

James was born and raised in America's Finest City. He is a passionate baseball fan with even more passion towards his hometown Padres. Editor-In-Chief of EastVillageTimes.com. Always striving to bring you the highest quality in San Diego Sports News. Original content, with original ideas, that's our motto. Enjoy.
Tags: Bring Back The Brown Padres, Padres, Padres Uniforms, Ron Fowler, San Diego Padres

Thank you for this article. We can only hope Ron Fowler and the rest of the Padres’ brass also reads this and finally gets it: The Brown will restore the Padres’ identity, and will generate a ton of merch sales in the process.

Fowler is a baseball exec which means dull and void. AND they all wear the same blue suits when they get together to discuss business. The modern USA is getting rid of suits ( except in the lawyer and corp world ). I don’t thing you will see a change until Fowler is long gone.. Brown and Yellow is not a great color scheme but who cares. It is the Padres colors!!

Well my friend, its like this!! Like a great friend once told me, if you are not going commando, then you are always wearing the brown and yellow, Yellow in front and Brown in back!!!! But again maybe that is why Fowler doesn’t want to bring it back, to many memories of his youth!!! Great article!!

As seen at Viejas Arena: SDSU vs. UNLV

3 Keys to an SDSU Aztecs victory over Utah State