The defensive play of the San Diego Padres suffered in 2018. Why was that the case for a team that was supposed to be reliable on the field?

Among the various disappointments of the performance turned in by the San Diego Padres in 2018, was the poor play of the team on defense.

Despite the addition of four-time Gold Glove award winner Eric Hosmer, the presence of Manuel Margot in center field, and the addition of Freddy Galvis at shortstop, the Padres’ play in the field left much to be desired.

In reality, Hosmer’s defense has never been highly regarded by defensive metrics, even in years when he won the Gold Glove. Although Freddy Galvis was a finalist to win a gold glove in 2018, the numbers once again were negative with regard to his showing on the field. There were players on the team whose defense has been highly regarded by the sabermetric community in previous seasons, who saw their defense decline during this past season as well.

We’re talking about guys like Manuel Margot, who saw his defensive value drop significantly this season after playing excellently in center field during the 2017 campaign.

Also significant were the lackluster defensive capabilities of players such as Jose Pirela, Cory Spangenberg, and Carlos Asuaje. The trio of second basemen was certainly uninspiring, similarly to the lacking defensive showings of Franmil Reyes and Hunter Renfroe in right field. Across the diamond, Padres position players were largely mediocre at best in their efforts to help out their pitchers defensively.

Here’s how the team’s defense was rated by various metrics:

So what we’ve looked at above are the most commonly used defensive metrics in baseball, but we obviously need to understand them fully to grasp what they are telling us. Starting on the far left of the table, we see the ‘UZR’ statistic, which stands for Ultimate Zone Rating. This is measuring the number of plays the Padres made as a team, relative to the number of chances they had to make outs on balls in play. The next metric is ‘UZR / 150’, which is measuring the exact same things that UZR is, but calculates the metric assuming that all players had participated in 150 games. ‘DRS’ stands for Defensive Runs Saved, and involves the staff of baseball info solutions watching and evaluating each individual baseball play to determine the skill of a fielder on every play. Fangraphs’ defensive metric is an all-encompassing measurement of defensive performance.

By the two UZR metrics above, the Padres’ defense was very underwhelming. Although defensive runs saved ranked them positively, the Fangraphs defensive evaluation of the team indicates that the majority of numbers regarding the Padres’ play in the field, rated it negatively. Why did the team play so badly on defense last year? Were their players simply bad on defense to begin with? The numbers above don’t tell the full story, so we need to look deeper into the team’s issues in the field.

Let’s begin by looking at the Statcast data regarding the Padres’ shift tendencies last season. Perhaps the players on the field weren’t positioned properly, hurting their defensive performances. Here’s the baseline data with which we’re going to work, regarding the team’s shifting frequency:

The Padres ranked 26th among all major league teams in total shifting percentage, which could provide an explanation as to why they struggled defensively. Had the team been more aggressive in positioning their infielders, for example, would they have recorded more outs in the field? As a pitching staff, the Padres allowed the fifth-highest batting average on balls in play, also known as BABIP. Clearly, they gave up more hits than almost any other pitching staff in the league. This is obviously related to the team’s lack of pitching talent, yet is also tied to the fact that they didn’t shift very often last season.

To understand how the Padres could have done a better job of shifting last year, let’s compare their shifting tendencies with those of the Royals. Kansas City shifted the fifth-most among major league teams last season and ranked second in baseball by Fangraphs’ Defensive value. They’re an example of a team that found significant success in using the shift in 2018. Let’s compare the positioning of the Padres and Royals side-by-side: 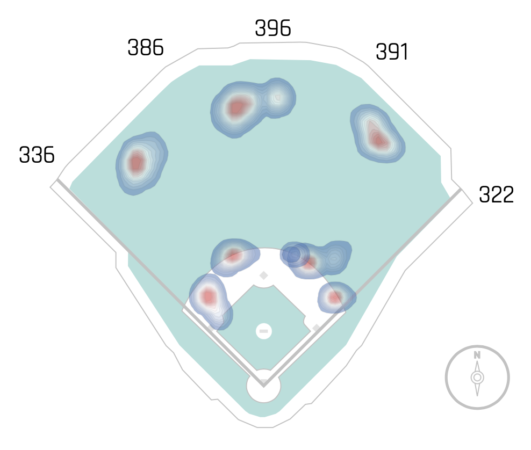 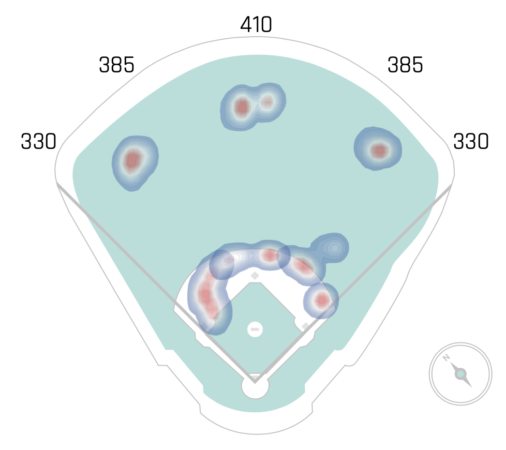 On the left, we can see where the Padres shifted against left-handed hitters this past season, while the identical shift data for the Royals are on the right. Look specifically at the infield, where the Royals had players positioned all over the place! The Padres, on the other hand, clearly did not shift to the same extent. Regarding the data analyzed here, it largely indicates that the Padres should have attempted to shift much more often than they did in 2018.

There was a multitude of reasons why the Padres didn’t record positive defensive numbers during this past season, partially as a result of the lacking defensive abilities of their players. However, the team as a whole should have put its players in better positions, in which they could have fielded more balls and recorded outs. Improving the team’s fielding should be a point of focus for the Padres going into 2019, regardless of whether the team is rebuilding or not.

A sophomore at Willamette University in Oregon, Conrad is majoring in Spanish but is also a writing center assistant for other students at Willamette. He has been a Padres die-hard his whole life and hopes to bring comprehensible statistical analysis to the site.
Tags: Andy Green, Eric Hosmer, Padres 2018 defense, Padres Defense, San Diego Padres

Good job. A part of the game that flies beneath the radar most of the time. On the field strategy is largely the province of the coach. Not to say baseball players or coaches are all that smart, but Andy Green has never impressed as a bright bulb. A fair number of people would look around at what others are doing and see if that made sense for them. Green seems to be lacking that curiosity. And with the black hole at 3B and 2B for most of the year, one would have thought shifting was more important to this… Read more »