It’s July 21 and the 2017 non-waiver trade deadline is fast approaching.

While most people take this time of year to discuss which players could be moved and which players should be acquired, I try not to get too involved. At the end of the day, the Padres are going to make some moves to better the future prospects of winning a World Series championship. With so many teams vying for upgrades, it’s hard to really speculate on both who the Padres will actually trade, and where those pieces will be moving. Is a Brad Hand trade inevitable? Does Trevor Cahill have real value? Can the Padres trade half their bullpen arms?

These questions will be answered in due time, but while we wait, it’s fun to look at what the Padres already have in their farm system before we speculate about what potential players they could add to it in the next week and a half. After sporting a bottom 10, or arguably bottom five, farm system following the A.J. Preller trade bonanza prior to the 2015 season, the Padres now find themselves with probably one of the five best farm systems in all of baseball.

They surely lack the amount of high-end talent of the Chicago White Sox, New York Yankees, Atlanta Braves, and perhaps a few other teams, but it’s hard to argue that any team has as much depth as the San Diego Padres do right now. With a few years of successful drafts under Preller’s belt, marked by the drafting of Cal Quantrill, MacKenzie Gore, and others, and a very busy international signing period in which the team signed Adrian Morejon, Luis Almanzar, and several other big time prospects, the Padres farm system has been completely replenished. All that isn’t even including the additions the Padres have made through trades, from Craig Kimbrel and Matt Kemp all the way to Drew Pomeranz and Fernando Rodney.

While the product on the field may be hard to watch in the big leagues, the minor league system has never been more fun to watch.

In recent weeks, several places have updated their top prospect lists, which includes both Baseball Prospectus and Baseball America most notably, and also includes Baseball America’s top-10 prospect list for the Padres, which was released on Thursday. The release of that list is what is driving this conversation, as there was quite a bit of controversy surrounding the ordering of Padres prospects in that top-10. For those who have yet to check out that top-10, here’s a screen grab of what that list looked like. 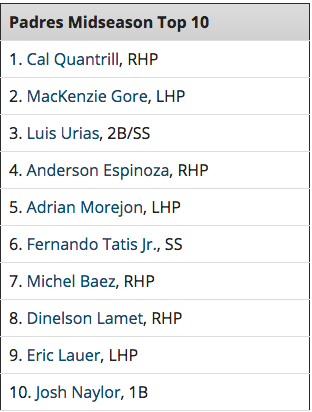 With Cal Quantrill sitting atop their list, Baseball America got plenty of backlash from Padres’ Twitter. However, there is a general lack of consensus on who should be the Padres’ number one prospect, which is usually the case. Given this discussion, I thought it would be fun to go through five names and give the case for each guy in the running. There is no right answer here, as prospect evaluation can be a bit of a confusing proposition, eventually given how different evaluators rate differently based on different circumstances. Some evaluators put more stock in ceiling, while some put more stock in past performance or potential floor. There is no right answer here, but it’s still an interesting conversation to have. Free from that minutiae, let’s take a look at the potential candidates for number one Padres prospect.

Cal Quantrill- RHP, Double-A, San Antonio Missions
15 GS, 79 IP, 80 K, 26 BB, 88 H, 39 R (34 ER) (Split between High-A and Double-A)
Sitting atop the Baseball America Padres’ Top 10 list is right-hander Cal Quantrill. Drafted with the eighth overall pick by the San Diego Padres in the 2016 MLB Draft, Quantrill has looked solid in his first full season back from Tommy John surgery. If not for that surgery, Quantrill very likely could have been the number one pick in last year’s draft had he excelled on the mound for Stanford. Despite not being picked that high, Quantrill is still pitching like a top of the draft type of player. There have been some hiccups in his development to this point, but for a guy coming off a major surgery which kept him off the mound for almost two full seasons, that is to be expected. With his elite level changeup, solid fastball, and improving command, Quantrill is a potential top of the rotation starter. Given his draft position, pedigree as the son of former major leaguer Paul Quantrill, and potential ceiling, there is plenty of argument to be made on Quantrill being the best prospect in the Padres’ deep system.

Luis Urias– 2B, Double-A, San Antonio Missions
105-340, 135 TB, 52 BB, 45 K, 129 wRC+
Up next in terms of potential number one prospects is second baseman Luis Urias, who is currently at a higher level than any of the other guys mentioned here. Originally signed out of Mexico back in 2014 by the San Diego Padres, the then 17-year-old Urias has made a quick move through the Padres’ minor league system. After a few solid, yet unspectacular seasons to start his professional career, Urias broke out in a big way in 2016, not only winning the Cal League batting title but also being named the Most Valuable Player of the league. After sporting a 130 wRC+ in 2016 with Lake Elsinore, Urias has been even better so far in San Antonio, with a 133 wRC+ over his first 345 at bats. Despite having more professional success than any of the other guys on this list, it’s hard to argue Urias has the ceiling of a few other guys mentioned here, especially given that his hit tool is his only real stand out tool. If more power comes, Urias could be a higher ceiling player, but that appears unlikely at this juncture.

MacKenzie Gore- LHP, Rookie League, AZL Padres
1 GS, 2 IP, 2 K, 1 BB, 1 H, 0 R
Moving on from a guy who has been in the Padres’ system the longest of the five listed here, it’s time to look at the player who has been in the Padres’ organization for just over a month: left-hander MacKenzie Gore. Drafted with the third overall pick in this year’s MLB Draft, Gore has so far made just one appearance with the Arizona Rookie League Padres. In that appearance, Gore threw two scoreless innings, giving up one hit, walking one, and striking out two. In terms of tools, Gore has it all. Not only does he sport a hard fastball, but he also has several off-speed pitches that are well developed as well as the command to go along with it. Given that left-handed pitchers are a little more rare, and given his age and draft position relative to his current talent level, there appears to be a very high ceiling for the young leftie. With that being said, he has yet to show much at the professional level, so right now it’s all speculation based on the talent he showed in high school.

Fernando Tatis Jr.- SS, Low-A, Fort Wayne TinCaps
91 G, 91-340, 168 TB, 47 BB, 105 K, 139 wRC+
Now we’re getting to everybody’s favorite Padres’ prospect lately, 18-year-old, Low-A shortstop, Fernando Tatis Jr. In recent weeks, Tatis has been just mashing at the plate, leading to him garnering more and more attention both in prospect circles and among Padres fans. Originally acquired from the Chicago White Sox in the James Shields trade, man what a trade for the Padres, Tatis has quickly risen up the ranks over the last several months, even finding himself at 101 on Baseball America’s top 100 prospects. Given his potential to be a five tool player, as he has shown a tremendous amount of power, a solid hit tool, sterling defense, a cannon arm, and a propensity to make things happen on the bases, Tatis may have a higher ceiling than just about any other prospect in the Padres’ system. With that being said, he is still just 18 years old and is striking out a lot, and has yet to face any substantial competition above Low-A. However, if you’re ranking on ceiling along, Tatis has to be near the top of that list.

Anderson Espinoza– RHP, High-A, Lake Elsinore Storm
24 GS, 108.1 IP, 100 K, 35 BB, 115 H, 56 R (54 ER) (2016 Numbers split between Low-A with Red Sox and Padres)
Last but not least is right-hander Anderson Espinoza, who was very clearly the Padres’ best prospect when he came over from the Boston Red Sox in the Drew Pomeranz trade last summer. After throwing just 32 and a third innings for the Padres’ Low-A team last year, and struggling a bit, Espinoza has not thrown a single pitch in a professional game so far this season. His injury status is obviously a big concern going forward, but prior to the injury it was clear he was the Padres’ best prospect. However, with the rise of several other guys, and a few new guys added to the fold, Espinoza’s grip on that position is tenuous at best. Despite all that, scouts have placed 65 or 70 future grades on Espinoza’s fastball, changeup, and curveball. The command is still a bit of a question, as well as some durability concerns given his small frame, but given the talent, Espinoza may very well have the highest ceiling of any Padres prospect save for maybe Tatis. With all that being said, it’s hard to overlook the injury, which has led to him falling in several different rankings this season.

Before wrapping this up, I took the liberty of doing a poll on Twitter to ask who Padres fans thought should be the number one prospect in the system. Here’s that result so far (will update once the poll is closed).

The beauty of the Padres’ farm system is that it is so deep, with so much talent at the top, that there is no right answer here. Sure, it’s fun to debate about this topic until we are all blue in the face, but each one of these five players has a real argument for being in that top spot. In the grand scheme, it doesn’t matter which player is in that spot, but it’s still a great conversation to be having, especially given how bad this farm system looked just two years ago. The future is looking very bright in San Diego.

Padres Down on the Farm: July 29 (Campusano 2 hits for EP/Merrill triples for ACL Padres/Valenzuela 2 hits)

Musgrove, Padres bounce back to shut out Rockies 3-0

Padres Down on the Farm: July 29 (Campusano 2 hits for EP/Merrill triples for ACL Padres/Valenzuela 2 hits)

Musgrove, Padres bounce back to shut out Rockies 3-0