Some things to look for from the San Diego Padres’ new outfielder Trent Grisham in 2020.

On November 27, 2019, the San Diego Padres acquired Trent Grisham and Zach Davies from the Milwaukee Brewers in exchange for Eric Lauer, Luis Urias and a player to be named later. With the acquisition of Tommy Pham and trade rumors swirling around the Padres this offseason, this trade has flown under the radar a bit.

Davies should improve the back end of the rotation, but Trent Grisham is a particularly interesting player who projects to be one of the better hitters for the Padres in 2020. Data-based evaluation for minor leaguers can be a bit tricky since there isn’t nearly as much publicly available information as we have at the MLB level, but Grisham has enough pro ball under his belt that we have a pretty good idea of what kind of player he is at this point.

Let’s take a closer look at Grisham and discuss what kind of role he’ll play for the Padres in 2020.

Grisham was drafted 15th overall out of high school in 2015 by the Brewers, with whom he signed for $2.7 million, slightly above the value of his draft slot.

He played well in rookie ball but struggled somewhat after that and never showed much power until 2019 when he hit 32 homers across 148 games starting in Double-A and ending with 51 games in the majors (and yes, an infamous mistake in the 2019 National League Wild-Card game). Juiced ball or not, that’s a lot more power than he displayed earlier in his career – his previous career-high was eight homers in 133 games at high-A in 2017.

That power, in addition to a naturally patient approach at the plate makes Grisham a lot more interesting than he was for most of his time as a prospect.

Grisham has shown excellent on-base skills throughout his professional career. He’s recorded an OBP of .347 or better at every stop in the minors, largely thanks to excellent walk rates. Check out his walk rates at every level of his career: 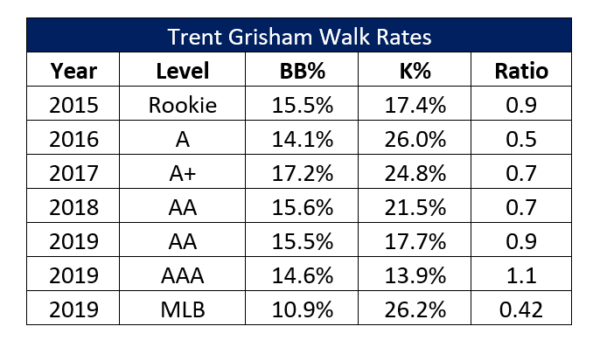 In 2019 Grisham posted an excellent 0.93 BB/K ratio between Double-A and Triple-A, which was good for 16th among 616 players in the upper minors (Double-A/Triple-A) with at least 250 plate appearances. Plate discipline is a skill that translates fairly well to the MLB level. While it didn’t necessarily reflect in Grisham’s brief MLB stint, he didn’t appear to be overwhelmed by major league pitching, boasting a walk rate that was 2.5% better than league-average with a whiff rate that was slightly better than average as well.

Grisham wasn’t a world-beater at the plate for Milwaukee last year, but a 92 wRC+ in your first 51 major league games is nothing to be upset about. Per Statcast, his 34.6% hard-hit rate is right in line with league average, and he didn’t have a problem getting the ball in the air, with an average launch angle of 16.0 degrees. If he can keep that up, he’s likely to be an MLB regular for quite a while.

Grisham is projected to be an average outfielder. However, he played very well in his 51-game appearance for Milwaukee, accumulating 5 Outs Above Average (OAA), 5 Defensive Runs Saved (DRS) and a 2.1 Ultimate Zone Rating (UZR). He played some center field in 2019 and could slide into that role in San Diego if need be, but he projects as a solid corner outfielder, which will be fine if his bat continues to make strides. The sample size is certainly small, but it’s fair to say that Grisham shouldn’t be a defensive liability.

Scouts may have underrated his speed a bit, as the 50-grade speed he was labeled with doesn’t quite line up with what we saw from him in the majors, where he had an average sprint speed of 29.1 ft/s (93rd percentile) per Statcast. Speed alone does not make a great outfielder, but it certainly doesn’t hurt. That speed allows him to close in on the ball quickly, and do things like this:

ZiPS believes Grisham will be the fourth-best hitter for the Padres in 2020, projecting him for a 107 OPS+ and 2.7 fWAR in 500 plate appearances. Steamer is a little less optimistic, projecting 1.6 fWAR across 522 plate appearances. He’s a pretty safe bet to be at least an average hitter, and he has the upside to be an above-average MLB regular in 2020 if his new-found power is here to stay.

How much playing time he’ll see in 2020 depends mainly on how the rest of the offseason shakes out, but in an ideal world, Grisham would see the strong half of a right field platoon with Wil Myers (assuming Myers is still in San Diego on opening day). Grisham has the tools to force his way into the every-day lineup if sooner rather than later, and there’s a good chance that will happen at some point in 2020. Having guys like Trent Grisham and Tommy Pham should bring some stability to an outfield that was an absolute mess in 2019. While there may be additional moves made between now and opening day, our new outfield pieces should provide a reason for optimism regardless of what else happens of the remainder of the offseason.

All stats and information used in this article are courtesy of Fangraphs unless otherwise noted.

Holden Phillips is an Occupational Exposure Scientist who also happens to write about baseball, primarily focusing on analytics. He is a huge baseball fan and fell in love with the Padres during his college years when West Coast baseball was often the only baseball on TV after 9pm in the Eastern time zone. Find his work at eastvillagetimes.com and maxsportingstudio.com.
Tags: Padres, Padres Minor Leagues, Padres Trade, San Diego Padres, Trent Grisham

8 thoughts on “What to expect from the Padres’ Trent Grisham”