The San Diego Padres need pitching help, but why is MacKenzie Gore not an option yet for the team?

By now, it is no secret that the San Diego Padres will be active leading into the MLB trade deadline.

Ryan Weathers, and Dinelson Lamet are all on the 10-day IL. Yu Darvish was just activated with a sore hip and back. Blake Snell just returned for Saturday’s game against the Washington Nationals, and Chris Paddack‘s struggles are continuing.

The pitching depth is depleted and the bullpen is taxed. The Padres need to find some pitching at the deadline. Danny Duffy has been one possible trade, and veteran Cole Hamels tossed a showcase and could land with the Padres.

However, the Padres have a pitcher in Triple-A that could make his way up to the majors. His name?

Do you remember the talented, young southpaw that was projected as the next staff ace when the Padres snagged him third overall in the 2017 MLB Draft? I’m sure you do.

After all, Gore’s name has circulated far and wide across the MLB spectrum, with teams calling for his services left and right, begging general manager A.J. Preller to include him in any possible trade package. 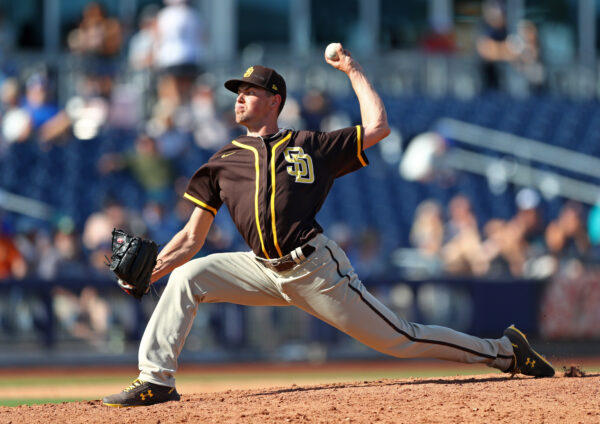 To this point, Preller has resisted– and for good reason. Gore is the #6 prospect in MLB.com’s Top 100 list and dealing him would be extremely tough.

In Spring Training, Gore was given a shot at making the Opening Day roster, but they decided to keep him in the minors to refine his game. It also didn’t help that there was no minor league campaign in 2020 due to the COVID-19 pandemic.

Either way, all season the Padres have left everybody wondering if Gore will make his long-awaited and highly-anticipated Major League debut.

Preller opened up on the possibility of bringing Gore up as the Padres head for a crucial stretch and try to make a run at a National League West division crown. (h/t KTSM-9)

“We’ve got to be in a really good spot. It’s not about just coming up and holding your own, it’s about him being the best version of himself. Dealing with some of the blister stuff earlier in the year, definitely looking at where he was delivery and arm-action wise and things like that. He’s still working every single day and we’re hoping he’s an option here at some point in the second half of the season.”

Hope is an interesting word to use in this situation. Of course, Gore has dealt with a blister issue and Preller added that the southpaw was in Arizona working on his timing and mechanics.

Could the Padres use Gore? Absolutely.

Is he ready? Well, it sure doesn’t sound like it, and Peter Gammons weighed in a bit more on Gore’s performance in 2021.

Perhaps a bit of regression from Gore, but that could also be because he is in Triple-A and the competition is tougher. Truth be told, many factors go into the decision to bring a pitcher up or keep him in the minors.

With that being said, the Padres decided to call up Reiss Knehr from Double-A San Antonio before the All-Star Break as they dealt with a rash number of injuries. Knehr didn’t pitch terribly, either. He went 3.2 innings and gave up a pair of runs on three hits while walking four.

Gore hasn’t pitched for the El Paso Chihuahuas since June 18, and there is no timetable for him to return to El Paso as he continues to work on several things in Arizona.

He has struggled since joining El Paso, but he is one of the most dynamic pitchers in the minors and absolutely lives up to that #6 prospect rating when his stuff is on.

It's the first scoreless outing of the season for the @Padres hurler. pic.twitter.com/Its76B2Ppf

Nobody knows when– or if– MacKenzie Gore will make his Padres debut in 2021. It could be in a couple of weeks, a month, two months, or a year from now. The Padres could repeat what they did with Ryan Weathers when the young lefty made his Major League debut in the playoffs.

Whatever the case may be, Gore is waiting and working tirelessly to get to where he was in the previous seasons. If he can unlock his potential, fix his mechanics, and prove to the Padres he is ready, there is a chance the talented southpaw could make his first appearance before the season ends.

Otherwise, next season it is for Gore and the Padres.

Matthew Wadleigh, born in Oceanside and currently lives in Fresno. He lives with his wife and 2 dogs and is a sports enthusiast. Retired drummer and member of the Fresno State Marching Band. He has been a Padres fan since childhood and has suffered during the struggles just like everybody else.
Tags: Gore Padres, Mackenzie Gore, San Diego Padres, San Diego Padres 2021

Would not put too much stock into anything Peter Gammons has to say. Especially for west coast teams.