The San Diego Padres will have a serious battle for the center field job during Spring Training, and newly acquired Trent Grisham has the skill set to win the job.

On November 27, 2019, the Padres completed a trade that sent touted prospect Luis Urias and pitcher Eric Lauer to Milwaukee for pitcher Zach Davies and Trent Grisham.

Grisham, fresh off of his first experience in the big leagues, was left with a sour taste in his last game in a Brewers uniform. He made the critical error that doomed the Brewers in the Wild Card Game against the eventual World Series champion Washington Nationals.

That one play shouldn’t define him as it was the first postseason game of his career and just his 52nd big league game overall. He also drew a walk and scored a run in that elimination game in Washington, D.C.

The 15th overall pick of the 2015 draft played all three outfield positions during his two-month cup of coffee in the major leagues. Overall, he posted a solid 5 Defensive Runs Saved. The Padres are interested in him playing center field since fellow first-year Friar Tommy Pham is entrenched in left while right field is reserved for one of Wil Myers, Josh Naylor, and a whole host of hopeful candidates.

Grisham has some stiff competition in center field, as MLB.com’s AJ Cassavell laid out. Franchy Cordero is finally healthy and hoping to, at last, put together an injury-free season, and his athletic tools best serve the Friars in center field. Former Gold Glove winner Juan Lagares is a non-roster invitee. Myers is a last resort in center field but has played 114 games in that spot (with a dreadful -15 DRS).

Even with the tough competition, Grisham should have the edge and should be given every opportunity to become the Padres’ everyday center fielder for 2020.

Despite his small sample size, Grisham put up impressive metrics that the average or aged statistic cannot reveal. Statcast’s findings are very complimentary of Grisham’s ability to play center field. Among outfielders with at least ten chances in the field, Grisham had the best reaction time to a ball, compared to the average outfielder, in the entire major leagues, better than notable Gold Glove-winning outfielders such as Jackie Bradley Jr. and Gerardo Parra. 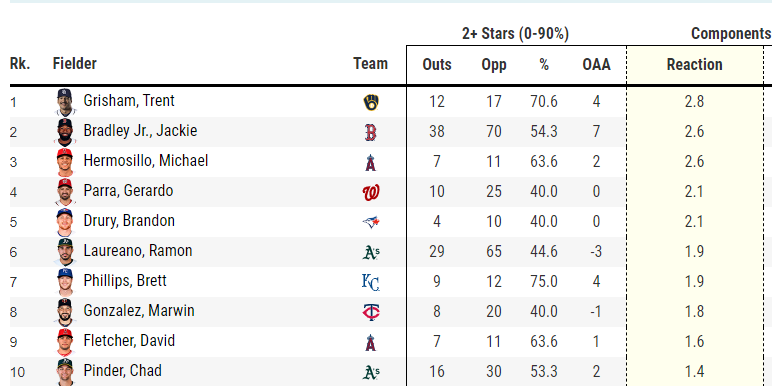 Grisham does not get enough credit for his athleticism. He can become a handy, multi-tool player for San Diego. The Texas native covers a lot of ground in the outfield along with that solid reaction time. He is fourth in all of baseball among outfielders in feet covered against the average, shown below.

Grisham is just plain fast as well as smart in the field. He stole 38 bases for High-A Carolina in 2017 and has 91 total steals over five minor league seasons. Here is his sprint speed compared to some of his new teammates.

The 23-year-old Texan is the fastest outfielder among the other options San Diego has. Franchy Cordero did not qualify for the leaderboard, but he had a sprint speed of 28.8 feet per second, still slightly slower than Grisham. The only Friar faster than Grisham is Fernando Tatis Jr., one of the fastest players in the league.

The biggest question mark with Grisham is his ability to hit against left-handed pitching as a lefty himself. In his brief stint in the bigs last year, he hit .234 with a .745 OPS against right-handers and a lowly .219 and .712 OPS against lefties.

Granted, it is common for a young player’s biggest weakness to be exposed quickly in the major leagues. Grisham did not have a lot of time to adjust to the league, attacking his weakness.

In the minor leagues, left-handers did not give Grisham much trouble. In 2019, he had 40 at-bats against southpaws and hit .325 with a whopping 1.050 OPS. The former Brewer has a history of hitting lefties well. He did not get a chance to adjust in his brief time with the big league club.

Grisham mashed in the minor leagues over his five years down on the farm. He posted a .791 OPS in almost 1,600 plate appearances in his minor league career, along with a stellar .376 on-base percentage.

The Padres need players who know how to get on base. They have lacked that player for years, and Grisham has shown a clear ability to be patient at the plate (14.6 percent walk rate in Triple-A in 2019) and get on base.

With his athletic talents in the field combined with his ability to get on base and track record of hitting well enough against lefties, Grisham should be given every opportunity to win the starting center field job this spring. Only an extremely poor performance against left-handed pitchers should deter the Friars from giving him that honor.

Native of Escondido, CA. Lived in San Diego area for 20 years. Padres fan since childhood (mid-90s). I have been writing since 2014. I currently live near Seattle, WA and am married to a Seattle sports girl. I wore #19 on my high school baseball team for Tony Gwynn. I am a stats and sports history nerd. I attended BYU on the Idaho campus. I also love Star Wars.
Tags: Center Field, Franchy Cordero, Grisham, MLB, Padres, San Diego Padres, Tommy Pham, Trent Grisham, Wil Myers

I’m really hoping Francy wins the center field job and stays healthy. This is his last chance and I hope he makes the most of it. This guys pop is ridiculous and he can easily be an Allstar if he can just stay in the game. In a perfect world it would be Trent in LF, Francy in CF, Pham in RF and Myers platooning at each of those positions.

If Cordero is healthy, he is the primary CF, especially against righties. It’s pretty much that simple.

I think they will send Cordero to AAA to play every day.

God I hope not. Wil Myers is honestly a better defender in CF than Cordero.