The Tijuana Xolos played in their fourth and final match of the group stage phase of the Copa Corona MX this Tuesday, February 28 at the Estadio Caliente.

The Xolos won the game 2-1 against the Cimarrones de Sonora in what was a thrilling contest at the Estadio Caliente. With the victory, the Aztec Canines are one of the top teams in the competition, accumulating nine points, topping group 1 of the tournament.

Miguel Herrera went with a 5-2-3 formation for the game. Luis Michel started in net, with John Requejo, Carlos Vargas, Michael Orozco, Hiram Munoz, and Juan Carlos Nunez. The midfield duo consisted of Juan Carlos Medina and Jorge Ortiz. While the front three was made up of Milton Caraglio, Henry Martin, and Matias Pisano.

The first half of the encounter was characterized by the dull, lackluster play often associated with Copa MX, that makes people lose interest in the competition. Miguel Herrera seemed to be playing for nothing and opting for the easy way to get to the playoffs of the competition, sit back and hope for no one to score. The Cimarrones were applying pressure to the Xolos using the rough style of play characterized by second division sides. There were not many clear scoring opportunities in the first half for either team. The clearest did fall to the home team in the 45th minute of the match. Defender, Michael Orozco, found the ball at his feet after a corner kick and was in front of a wide open Cimarrones net. The American Xolos’ player delivered an anticlimax to the fans, as he blasted the ball into the stands. That miss by Orozco signaled the end of a colorless first half, where much of the same was expected for the next 45 minutes.

The second half of the match brought more fans into the stadium, and much more excitement as well. The last 45 minutes did start out like the first with Miguel Herrera seemingly seeking the victory, without much excitement for the fans.  Much like a boxing match with Floyd Mayweather Jr., ‘Piojo’ was seeking the strategic victory to seek out his prize. Then in the 60th minute that strategy seemed to have come to a stop with little to no soccer seen in the match. Paul Arriola replaced midfielder, Jorge Ortiz. Ortiz had done solid work in the midfield, providing good defensive work for the Xolos. Now with Herrera looking to switch up the strategy, Arriola came on to try and provide more options going forward.

At first glance the change seemed to have had a negative effect on the match. Six minutes after the substitution, the first goal finally came at the Estadio Caliente. But no, it did not bring cheers, it brought utter silence as the Cimarrones were the first ones to open up the scoring. Luis Lorona scored his second goal of the year against the Xolos, the first also coming in a Copa MX match in week 1 of the competition. This is a man who has zero goals in the second division, but somehow has managed to score two goals against the Xolos. The goal was a well executed header by the Mexican striker after a good cross into the box by his teammate. The marking by the Xolos’ young core in defense was what ultimately brought the seemingly demise of the Xoloitzcuintles. 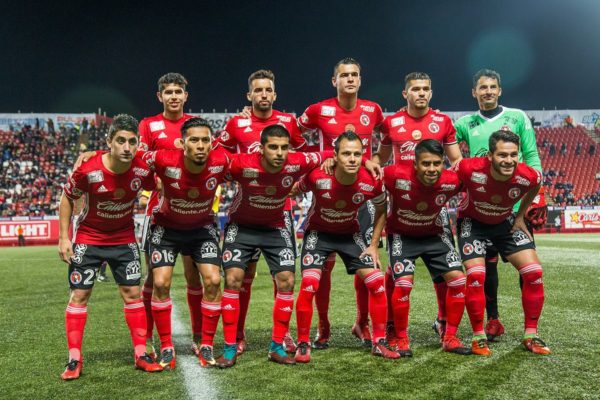 Right after the goal, Miguel Herrera knew he had to adapt and make a change in the game. First, right after the goal, Aviles Hurtado replaced Matias Pisano. Then in the 71st minute, Victor Ignacio Malcorra replaced defender, John Requejo. Hopes of postseason play for the border-city side seemed slimmer and slimmer, as the clock ran down. Then with 11 minutes remaining, in the 79th minute, that hope filled the Estadio Caliente. Aviles Hurtado worked his magic as he made a magnificent pass to Victor Malcorra inside the penalty area, the Argentine who was near the edge of the box crosssed the ball inside where striker, Henry Martin was running in to tap the sphere into the back of the net, and missed the opportunity. What seemed like an unforgivable miss by Martin resulted in a penalty for Club Tijuana as Cimarrones’ defender, Nestor Vidrio, pulled down Martin and earned himself a red card on the play. In the 81st minute, the Xolos tied the match on the penalty with Aviles Hurtado executing the opportunity with calmness and ease.

From this point on, the match was not as exciting as it could possibly be. Sonora did not want to taste the bitterness of being knocked out of the competition, while Tijuana seemed eager to get more than just qualification into the next round. A world of scoring opportunities followed in the dying minutes of the match for Club Tijuana, most notably in the 87th minute of the match where Paul Arriola air-mailed the ball into the stands right in front of Sonora’s net. After what seemed like an eternal nine minutes of the Aztec Canines wasting opportunity after opportunity in front of the Cimarrones’ net, the well-deserved winning goal came for the home side.

It seemed like it was impossible for the Xolos to win the game as the ball could not find the back of the net. Then in the 90th minute of the encounter Victor Ignacio Malcorra filled over 20 thousand fans with excitement on a cold night in Tijuana. The Argentine midfielder found himself alone against Sonora’s goalkeeper and sunk the ball perfectly on a well located shot in the bottom right-hand corner of the visitor’s net. Miguel Herrera with a relieved and sarcastic look on his face raised his arms in the air as if to say, “finally, the ball found the back of the net”. With that the game ended in a thrilling 2-1 encounter which was anything but easy for the Xoloitcuintles. The Xolos next task is again at home as they will face Pachuca at the Estadio Caliente this Friday. Fuerza Tijuas!

Francisco, 21, Chula Vista area, Journalism student at Southwestern College. I have been a Padres fan all my life, did most of the series previews and recaps in the Padres' 2016 season for EVT. Now I focus more on the Tijuana Xolos soccer team, get press passes for every home game and write consistently about the team for EVT.
Tags: Liga MX Soccer, Tijuana Xolos, Xolos, Xolos Soccer, Xolos vs Cimarrones