The Tijuana Xolos were facing heavy odds heading into this week five game against Club Leon away from home. Miguel Herrera’s side, just based on pure form, were the clear favorites in this match. But the fact that the game was at the Nou Camp in Leon, changed the odds. The Xolos had never won a game at the Nou Camp in a first division match before this one, and had been a part of six devastating losses. ‘El Xolaje’ had only scored three goals at the Nou Camp before this one, while having conceded 22 against ‘La Fiera’.

The encounter between the two teams started off in a heartfelt manner as the Xolos were wearing commemorative jerseys that sported #FuerzaYasser, in honor of Yasser Corona and his recovery process. Before the match started, players from both sides held up a banner in support of the Mexican defender that also had #FuerzaYasser on it.

Miguel Herrera went with his trusty 5-2-3 formation with all the regulars in the starting 11. Gibran Lajud was the man between the sticks. Damian Perez, Emmanuel Aguilera, Juan Carlos Valenzuela, Michael Orozco, and Paul Arriola made up the defense. Then the midfield consisted of two holding midfielders in Joe Corona and Guido Rodriguez. While the attack was made up of Victor Malcorra, Aviles Hurtado, and Milton Caraglio.

Club Leon dominated in the early stages of the match as Miguel Herrera was sitting back, much like he did against Chivas. Herrera suffered the consequences of doing so with an early goal by the ‘Esmeraldas’ in the 5th minute of the game. The canines were caught off guard with defensive midfielder Guido Rodriguez up the field and were counter-attacked, resulting in a beautiful flick by winger Elias Hernandez over Gibran Lajud to make it a 1-0 game.

After the goal, Miguel Herrera did not seem too concerned about switching up his tactics, as the Xolos did not push forward or try to make the game a different one any time soon. A turning point would come in the 20th minute of the encounter, when Michael Orozco sustained an injury and would be subbed off for Juan Carlos Nunez. Herrera only had 21-year-old Hiram Munoz available on his bench in the center-back position, so ‘Piojo’ decided to go with the veteran Nunez, and switch up his tactics in the game. The injury forced the skipper to abandon his back-line of five and switch to four defenders, with Juan Carlos Nunez playing in the right-back position and Paul Arriola being pushed up to midfield.

This instantly made an impact on the game as 10 minutes later, in the 30th minute, Aviles Hurtado picked up a penalty for Club Tijuana via a foul inside the box by 20-year-old defender, Osvaldo Rodriguez. Aviles Hurtado himself took the penalty and evened up the game at a goal a piece. After his goal, the Colombian forward jetted towards the Xolos bench where Henry Martin was waiting for him with a custom shirt that honored Yasser Corona. Hurtado held up the shirt and dedicated his goal to his teammate. After this goal, the Xolos really got accustomed to the new formation and made the best of it against Club Leon.

Seven minutes later, in the 40th minute of the match, Aviles Hurtado found space to break free one-on-one against Leon’s goalkeeper William Yarbrough. The skillful forward tried to get past the goalie, but Yarbrough could not keep his composure and ended up tripping Hurtado for the second penalty of the match. This time, Argentine striker Milton Caraglio delivered the penalty beautifully with his left foot in the top left corner of the net to make it a 2-1 lead for the Aztec dogs.

Gibran Lajud has been crucial for the Xolos success in this Clausura 2017 tournament. The 23-year-old goalkeeper showed his worth once more in the 60th minute of the encounter. A string of passes by the ‘Panzas Verdes’ found Luis Montes inside the box where the midfielder took a powerful shot at the right post of the Xolos’ net, but Lajud was there to parry it away for a corner kick.

The 63rd minute brought forth the third goal of the game for Miguel Herrera’s side. Midfielder Guido Rodriguez intercepted the sphere at midfield and took a tremendous shot from over 20 yards out for the the third goal of the night for ‘El Xolaje’. In the 67th minute, Miguel Herrera made his second substitution of the match, as Milton Caraglio was replaced by fellow countryman, Juan Martin Lucero.

10 minutes later, in the 77th minute of the match, Aviles Hurtado took advantage of a miscue from Club Leon and received the ball at midfield, where he would make a full sprint towards William Yarbrough’s net. The Colombian forward displayed his unselfishness by braking just before the half-moon of the net and finding teammate, Paul Arriola. The San Diego man sunk the ball perfectly with his left leg to cement the Border-city team’s victory, with a scoreline of 4-1 now.

The final substitution for Miguel Herrera came in the 82nd minute of the duel. Joe Corona was brought off for veteran Juan Carlos Medina to take control of the midfield in the dying minutes of the match. 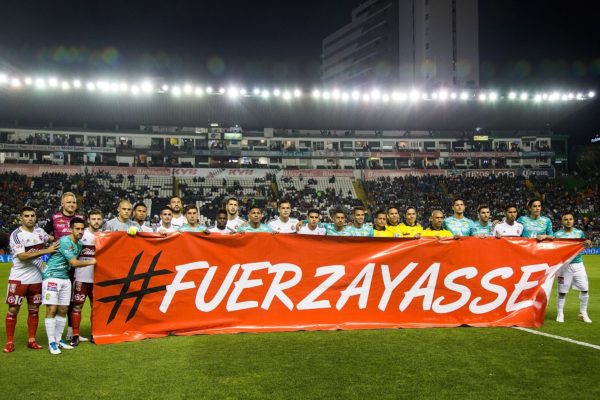 The ‘Esmeraldas’ managed to get a mercy goal in the 85th minute of the match as a cross found midfielder Carlos Pena inside the box. Leon’s player would slide to sink the sphere past Gibran Lajud to end the game with the 4-2 scoreline.

The obvious key player of the match was Aviles Hurtado, who picked up two penalties, scored one penalty, and made a spectacular assist as well. The Xolos played extraordinarily well as a unit, with standout performances by Joe Corona, Paul Arriola, and Guido Rodriguez. San Diego man, Joe Corona, was specifically spectacular in this game, being a key figure for Miguel Herrera in controlling the midfield.

The Tijuana Xolos, after six games, finally beat the statistics at the Nou Camp and got an important win to secure first place with 12 points in the Liga MX CLausura 2017 competition. Tijuana is looking like a real contender after this match as the Xolos now have scored 12 goals in five games and have shown moments of absolute brilliance from their unified team. The team posted pictures and videos after the match, celebrating and wearing shirts in honor of Yasser Corona. You can tell that the team is behind their fallen teammate 100 percent.

The Xolos will now travel to the Stub Hub Center this Tuesday to face the Los Angeles Galaxy in a friendly match, then will start off week 6 of the Clausura facing Necaxa at home on Friday. Fuerza Yasser, and Fuerza Tijuas!

Francisco, 21, Chula Vista area, Journalism student at Southwestern College. I have been a Padres fan all my life, did most of the series previews and recaps in the Padres' 2016 season for EVT. Now I focus more on the Tijuana Xolos soccer team, get press passes for every home game and write consistently about the team for EVT.
Tags: #FuerzaYasser, Fueza Yasser, Tijuana Xolos, Tijuana Xolos vs Club Leon, Xolos vs Leon