The Xolos traveled to Monterrey for their week 16 matchup in the Liga MX Clausura 2017.

The Aztec Canines faced Tigres UANL in what was set to be a very tough encounter for Miguel Herrera’s men. This was Herrera’s first game after a five-game suspension that kept “El Piojo” out of the sidelines.

Miguel Herrera went with a box standard 4-4-2 formation for the encounter. Gibran Lajud was of course in between the sticks. Juan Carlos Nunez, Michael Orozco, Juan Carlos Valenzuela, and Carlos Vargas made up the back line. The midfield consisted of Joe Corona and Guido Rodriguez in the middle with Paul Arriola and Ignacio Malcorra playing out on the wings. The strike force for Herrera was made up of Aviles Hurtado, playing just in behind Juan Martin Lucero. There were several notable absences from the starting 11 for the border city side. In the defense, Emmanuel Aguilera and Damian Perez were not present because of injuries. Another notable injury was the striker, Milton Caraglio, who was missing his first game of the tournament.

Michael Orozco was clearly not ready to play yet and was quickly taken out of the encounter. The American only played eight minutes of the game in Monterrey before being subbed out for Hiram Munoz. The Xolos were not generating much early on and Tigres UANL took advantage of that. The inexperience of the Xolos’ backline showed as the Felines took an early 1-0 lead in the 11th minute of the match. A beautiful string of passes by Tigres from Javier Aquino to Guido Pizarro to Jesus Duenas inside of the penalty area made the difference. Duenas took a calm and collected shot inside of the penalty area that landed in the bottom right-hand corner of Gibran Lajud’s net. The goal really sparked the Tigres’ offense in the first half and the goals kept on rolling at the Estadio Universitario in the first half.

The game was awfully slow-paced for a long time with the weather being pitiful at over 100 degrees. The goals came back at the end of the half, unfortunately for Tigres UANL.  The second goal of the game for the ‘Regios’ fell in the 41st minute. Again, like the first goal, the second goal was delivered off a beautiful play. Jesus Duenas executed an impeccable throw on the left wing near Tijuana’s penalty area that found Andre-Pierre Gignac inside the Xolos’ penalty area. Gignac shielded off the young defender, Carlos Vargas. This allowed Lucas Zelayaran to rush in towards the ball and release a powerful shot that went right through Gibran Lajud. It was clear that Lajud was not expecting the shot with Zelayaran coming in hot with a burst of pace. 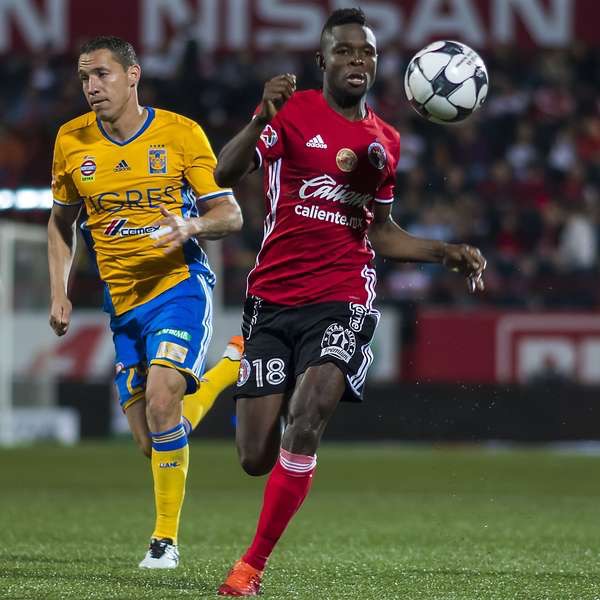 The Prehistoric Dogs were really in trouble now, being down 2-0 away from home against a tough opponent. Things turned from bad to worse for Miguel Herrera and company, with Tigres UANL getting the third goal of the game just a few minutes after the second goal in the 43rd minute.

Lucas Zelayaran swung in a free kick that found the captain, Juninho, inside the penalty area. Juninho headed the ball slightly up and then made a spectacular half-scissor kick into Gibran Lajud’s net. The first half ended with the Xolos down by a score of 3-0. The Aztec Canines never recovered from the tremendous deficit and did not create many other opportunities in the game. Tigres UANL could have extended its lead in the second half but Gibran Lajud made two key saves to keep the score the same. The second half was very slow-paced and brought nothing much else to the game. Miguel Herrera did try to switch up the game by bringing on Matias Pisano and Henry Martin, but those changes made little to no impact on the encounter.

The loss was easily the worst of the Clausura tournament for the Tijuana Xolos. The Canines had suffered some tough losses in the year, but had yet to be dominated like they were in this game. The absences of Milton Caraglio, and especially of Damian Perez, made a massive impact on the game. Although Perez is a defender, the Argentine makes an immense impact on the attack, making key passes and supporting the wingers going forward. His absence was felt, especially with Nunez and Munoz as the fullbacks who do not offer much going forward. The loss was a disappointing one for the border city side and showcased the dangers of possibly finishing in first place and facing a team like Tigres UANL in the playoffs. The Xolos will finish up the regular season of the Liga MX Clausura 2017 next Friday in Tijuana, hosting Veracruz. It will be interesting to see if Club Tijuana can wrap up the season on a high note and who they will play in the first round of the playoffs. Fuerza Tijuas!