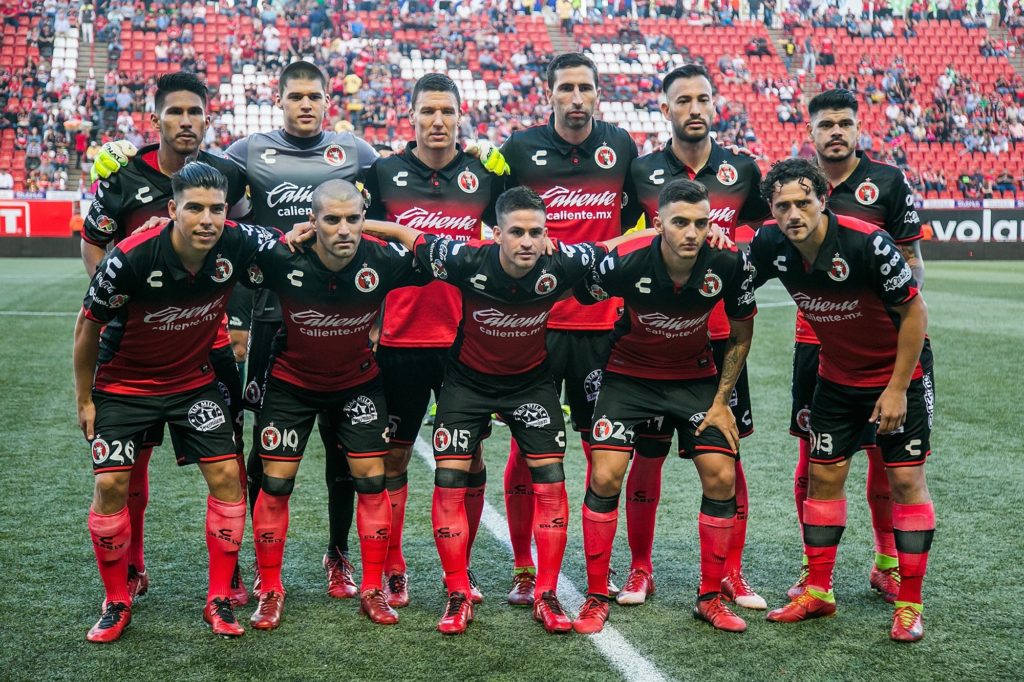 This Friday, Aug. 18, the Tijuana Xolos hosted Santos Laguna at the Estadio Caliente for their fifth game in the Liga MX Apertura 2017. The game was set to be an intense and exciting game as both teams were looking for their first win of the season. The first three weeks of the season for Club Tijuana had been a nightmare as the team had no wins and no goals. Last week the Xolos scraped a point out of Puebla and scored their first goal in the Liga MX under Eduardo Coudet, but the game still left a lot to be desired. Coudet had consistently used a 4-4-2 formation with an attacking midfielder playing in behind the striker. It came as a tremendous surprise when the lineup was announced for Friday night and the Argentine’s starting lineup featured five defenders.

“Chacho” had made a drastic switch to a 5-3-2 formation and it was very unclear heading into the game what style of play was going to be implemented. Gibran Lajud was in net with the back five of Matias Aguirregaray, Juan Carlos Valenzuela, Alejandro Donatti, Emmanuel Aguilera, and Damian Perez. The three players in the midfield were Luis Chavez, Damian Musto, and Ignacio Malcorra, while the front two consisted of Luis Angel Mendoza and Gustavo Bou. The formation suggested that Coudet had switched plans and was abandoning his “dynamic, intense, offensive” play style. But this was not the case. The formation did wonders for the team, as the Xolos went on to have their most impressive performance under Eduardo Coudet. Malcorra had a lot of liberty in his position, moving up and down the pitch and really adding to the dynamic play style. The full-backs also pressed very high up the pitch, adding to the attack while not losing security in the back because of the back line of five. Another interesting thing to note is the extensive depth on this Xolos squad as Joe Corona and Michael Orozco did not even make it to the bench for this game.

The border city team looked revived and like a very different team than what we had seen in previous weeks. From the initial whistle, there was a clear structure in the midfield and solidarity in the defense. Coudet’s play style was very evident for the first time in his reign over Club Tijuana and for the first quarter of the game, Club Tijuana dominated its opposition. Santos Laguna was sitting back and waiting for a counter-attack despite playing against five defenders. The Xolos kept on pressing and opened the score in the 22nd minute of the encounter. A beautiful string of passes on the left-hand side of Santos’ penalty area between Luis Angel Mendoza, Ignacio Malcorra, and Gustavo Bou resulted in a goal by Bou. The passes were in quick sequence and Bou was clinical driving the ball near-post past Jonathan Orozco. The goal was the Xolos second of the season and it was also Bou’s second of the season after scoring his first last week in Puebla.

As the half continued, the home team displayed full control of the game and an energized Coudet kept on pressing his players to move forward. The Xolos’ defense had full control of Santos Laguna’s offense as lengthy striker Julio Furch could not even win a header against Emmanuel Aguilera or Alejandro Donatti. In the 36th minute, the second goal of the night came for the Xoloitzcuintles as a one-two between Damian Musto and Ignacio Malcorra resulted in Malcorra making a fantastic run and finding the back of the net. The Argentine shot from a very limited angle on the left-hand side of Santos’ penalty area, but released a bullet that found the back of the net. The goal was one of the best this season in the Liga MX and the Aztec Canines now had a comfortable 2-0 lead. The first half was complete domination by the home team and was the best half of play for the Xolos under Eduardo Coudet.

The second half started up with the same type of intensity as the first half, which made for a thrilling encounter. Santos Laguna immediately had a scoring opportunity as Osvaldo Martinez hit an outside-of-the-box shot, but the potent strike smashed the crossbar and the Xolos were spared from conceding early in the half. Club Tijuana kept its enticing style of play, but not many clear opportunities were created. Santos Laguna could not get past the back five as Los Guerreros failed to deliver on another clear opportunity in the 70th minute. A headed pass by Djaniny Tavares found Julio Furch, but the Argentine was unable to get the strike on target. Eduardo Coudet did not switch his formation. The only substitutions he made were man-for-man changes that did not really impact the game. Henry Martin replaced Luis Angel Mendoza, Juan Carlos Nunez came on for Matias Aguirregaray, and Enzo Kalinski saw some minutes coming in for Luis Chavez. The Xolos controlled the rest of the match, and as the final whistle blew there was a sense of relief and gratitude by the home support. Ignacio Malcorra and Damian Musto shared a friendly hug after the game showcasing that any issues between the two were all in the past.

For the first time under the leadership of Eduardo Coudet, the team played like a team and there was a clear structure and a clear style of play. In his post-game news conference, a cheerful Coudet said, “Today I feel identified with this team”, but also said, “There are still adjustments to be made. We will keep on growing”. It seems that Coudet has finally found confidence and trust with his players, which should be key going forward this season. When Coudet said “The team is growing” last week the comment was controversial given the results, but now it seems like the team is coming together very nicely. The addition of Juan Manuel Iturbe, which Coudet and the Xolos players seem to be very excited about, will only strengthen this core of players as well. Club Tijuana has a huge week coming up as there will be two Liga MX matches, first against Queretaro away from home this Tuesday, then at the Estadio Caliente against Pachuca next Friday.