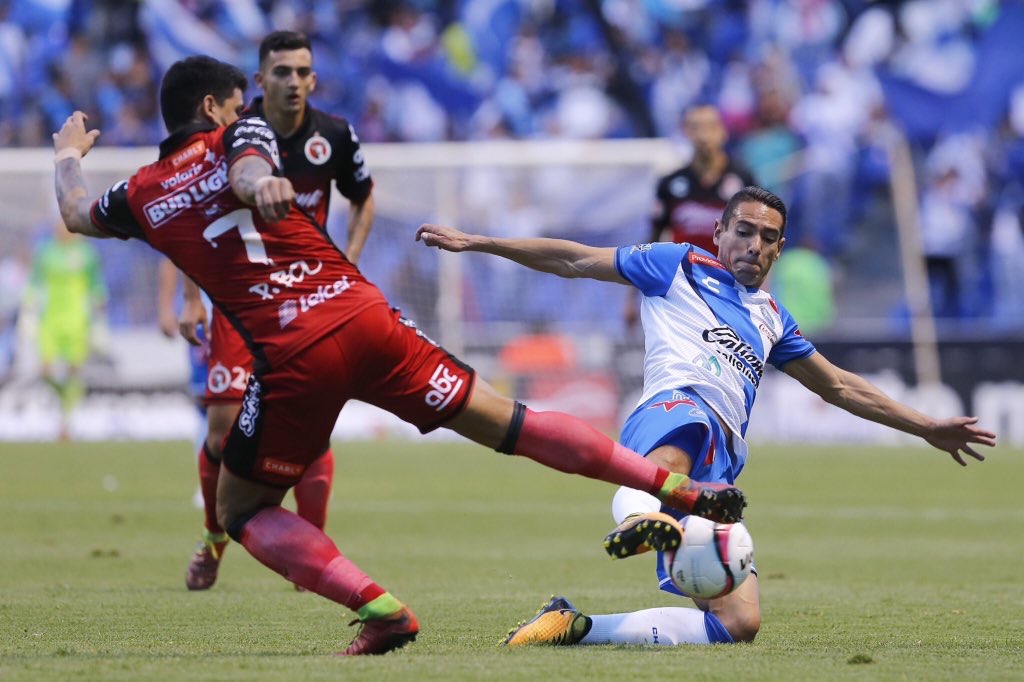 The Tijuana Xolos played their fourth game of the Liga MX Apertura 2017 this Friday, August 11. The border city side traveled to the Estadio Cuauhtémoc to face Puebla in a game that did not have high expectations. The Xoloitzcuintles were coming off a tough week with a shocking 1-1 draw against second division team Atlante in the Copa MX, and the departure of Paul Arriola to D.C. United as well.

Going into this game, Coudet’s Xolos were coming off three consecutive losses in the Liga MX without a goal. The most recent defeat for Club Tijuana was a 3-0 loss against Monterrey at the Estadio Caliente that already sparked discussion of Eduardo Coudet being in the hot seat.

The Argentine manager opted for a different 4-4-1-1 formation for this encounter. Gibran Lajud was in net, with Michael Orozco, Juan Carlos Valenzuela, Emmanuel Aguilera, and Damian Perez making up the back line. The two players in the heart of midfield were Joe Corona and Damian Musto while Ignacio Malcorra and Luis Angel Mendoza played out on the wings. Luis Chavez played just in behind the lone striker Gustavo Bou but, Chavez did also rotate with Mendoza throughout the game.

The lineup was promising to head into this game with three modifications from the game against Monterrey. Emmanuel Aguilera was back in the starting 11, placing Michael Orozco in the right-back slot and leaving Matias Aguirregaray on the bench. Luis Chavez replaced Henry Martin and Luis Angel Mendoza replaced the departed Paul Arriola.

Club Tijuana managed to scrape a sloppy 1-1 result against arguably the worst team in the Liga MX. The major contributors for the border city side were not wearing a red and black jersey, they were the assistant referees who made two controversial calls that cost Puebla the win. The first half of the encounter was very exciting despite there being no goals. Both teams were eager to get the three points from the game. One of the deciding moments of the game fell in the 13th minute, where Carlos Salom put the ball in the back of Gibran Lajud’s net, but the goal was called offside. After further review, it was very clear that the linesman had made a fatal error and that there was no offside present in that play. The game remained scoreless throughout the half, but Puebla was clearly the dominant team with many more opportunities and a much more enticing style of play.

The first few minutes of the second half decided the outcome of the game. Puebla struck first with a goal in the 47th minute. Francisco Acuna made Damian Perez and Damian Musto look silly on a play on the wing. The Mexican midfielder swung in a perfect cross into the Xolos’ penalty area that found the Colombian Christian Marrugo, who made a beautiful diving header that found the back of the net. Puebla deservedly obtained the 1-0 lead, but it would not last as the Xolos finally scored their first goal of the season in the 56th minute.

After 325 minutes without a goal in the Liga MX under Eduardo Coudet, Gustavo Bou finally broke the spell and tied the game at the Estadio Cuauhtémoc. A potent pass by Luis Chavez from the halfway point made its way to Gustavo Bou inside Puebla’s penalty area. The Argentine calmly finished the chance and tied the game. The goal was very controversial as Bou was clearly in an offside position and it was now the second time in the game where the linesman helped Club Tijuana.

The score remained the same throughout the rest of the encounter. Eduardo Coudet tried experimenting and brought on 18-year-old Ivan Lopez for Luis Angel Mendoza to make his debut. The only other substitution “Chacho” made was bringing off Luis Chavez for the Chula Vista native, Alejandro Guido. Both changes did not make much of an impact on the game and the score remained the same until the final whistle.

The Aztec Canines played another sloppy and inconsistent game under Eduardo Coudet, but finally managed to score and scrape that first point of the Liga MX season after four games. Club Tijuana was ultimately aided by the poor officiating in the game, and that is worrisome considering Puebla is said to be one of the worst, if not the worst, team in the top circuit of Mexican soccer.

The player of the game for the Xolos had to be Gibran Lajud, who had another solid performance with four key saves in the game. Credit must be given to Los Camoteros as the home team was the much better team in the game, and after this performance by the Xolos, Eduardo Coudet must be in deeper waters.

To add insult to injury, there was an altercation between Ignacio Malcorra and Damian Musto when the game ended, showcasing that the problems on this team stem deeper than the results on the pitch. The Xolos will stay in Puebla for their next match as the border city team will face La Franja at the Estadio Cuauhtémoc again for a Copa MX game this Tuesday.