The group stage of the Copa MX is set to start this Tuesday as the Tijuana Xolos will take on Cimarrones of Sonora from the Liga de Ascenso, or second division. The Xolos find themselves in group one of the Copa MX and are heavy favorites to take the group with the two other teams from the group being from the second division of Mexican soccer. Tijuana have the Cimarrones and Correcaminos UAT in their group. If you are unfamiliar with the Copa MX, it is a tournament that combines teams from the first and second divisions of Mexican soccer. There is a four-game group stage, with the winner of the group moving on to the knockout stage of the tournament. The Xolos should have no problem breezing through this group, but away matches like the one on Tuesday can prove to be complicated.

The Xolos are coming off one of their greatest victories in recent team history as they defeated Puebla F.C. by a score of 6-2 in the Liga MX. Tijuana now moves on to their next task in Hermosillo, Sonora this Tuesday. The way this tournament works, the top teams will often rest their key players and give bench players and young players within the organization an opportunity to play. Miguel Herrera’s side do have a very strong bench, and it’ll be interesting to see how they get on in this game. Veteran Luis Ernesto Michel will most likely get the chance to start in net for the first time this year. The 37-year-old is past his prime but he has proven that he can handle the second division in the past, when he played with Lobos BUAP last season. Yasser Corona is another name that stands out when looking at Tijuana’s bench. Corona stands at 6-foot-1 and is an imposing defender that has had success in the past with Queretaro F.C., even making the Mexican national team in 2015. Yasser does often push forward and is great in corners and set-plays. We could be seeing the 29-year-old get on the score sheet this Tuesday.

Juan Carlos Nunez is another man on the Xolos bench with a wealth of experience, having been on the club since 2008. ‘El Diablito’ has been with Tijuana since their days in the second division and is very well adapted to the rough play that many Liga de Ascenso teams utilize. The 33-year-old defender can prove to be key in this tournament. The strike force that lies on the bench for Miguel Herrera is composed of Henry Martin and Juan Martin Lucero. Martin has been with the club since 2014 and possesses great finishing, which can be instrumental in this game. Lucero may crack the starting 11 for the Liga MX competition soon, but while he is still getting adjusted to Mexico, it would be wise to start him in this upcoming game, Tuesday. If Lucero is to start, expect at least a goal from the Argentine forward. Lucero demonstrated in his 10 minutes against Puebla that he will find space and land in the perfect position. The most interesting player that Tijuana will likely have starting in this game is Joe Benny Corona. The former Sweetwater High student just recently came back to Tijuana after being on loan for two years. Corona has looked great this season coming off the bench for ‘Piojo’ Herrera, scoring in his last appearance against Puebla. The midfielder can prove to be dynamic in games and provide great crosses or shots outside the box.

One of the younger and more interesting players that could get a chance in this game is 21-year-old defender, Adrian Ramos. This former Southwestern College student did get a chance to play in the Copa MX competition last season and looked sharp in the center back position. The Xolos are doing a great job keeping San Diego fans interested in the club with players like Ramos who have ties to the city. This should be an interesting game, which the Xolos should win fairly comfortably. 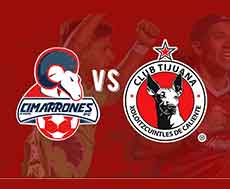 The team from the neighboring state to Baja California is led by Juan Carlos Chavez at the helm. Chavez had an extensive Liga MX career playing with various teams from 1988-1999. Managing wise, Chavez also has a lot of experience as he has been in charge of Liga MX side Atlas F.C. and also the U-20 Mexican National team. Chavez’s men, however, are struggling this season as they have lost all their matches to start off the Liga de Ascenso. Last season, the Cimarrones finished in seventh place in the second division and were able to make the playoffs. This season, the chances are looking slim that they will repeat that performance, only having scored two goals to this point. Both goals have come late in games and have been via penalty by striker, Aldo Polo. The 33-year-old striker does actually have some history with the Tijuana Xolos as he had four appearances, scoring one goal with the club back in 2013. Sonora do carry several interesting former Liga MX players on their squad, like Jorge ‘Kalu’ Gastelum, Nestor ‘Woody’ Vidrio, Othoniel Arce, Luis Lorona, and Abraham Carreno. Among them, Othoniel Arce is the one that really stands out, as he was once considered a hot prospect in Mexican soccer. The 6-foot-3 striker was once said to be the next great thing for Mexico, but now finds himself lost in the world of second division soccer. His stature can prove to be a problem in set-pieces so Tijuana must be cautious with the lanky forward.

It will be shocking if the Xolos can not come away with a goal margin of at least three goals. Yes, Tijuana is playing away from home, but even the Xolos bench players are not comparable with what Sonora has to offer. If Lucero does start the game, expect to see at least one goal from the Argentine striker. Another key player to keep a close watch on is defender Yasser Corona, who has been successful scoring goals in the past. Tijuana’s main play-maker should be Joe Corona, who knows how to move the sphere and cause problems for the defense. Final prediction for this game is a comfortable 4-1 victory for the Xolos to start off their Copa MX campaign. Fuerza Tijuas!

Francisco, 21, Chula Vista area, Journalism student at Southwestern College. I have been a Padres fan all my life, did most of the series previews and recaps in the Padres' 2016 season for EVT. Now I focus more on the Tijuana Xolos soccer team, get press passes for every home game and write consistently about the team for EVT.
Tags: Tijuana Soccer, Tijuana Xolos, Xolos, Xolos Soccer, Xolos vs Cimarrones