The Tijuana Xolos hosted Club America at the Estadio Caliente for a Copa MX playoff round of 16 match this Wednesday, March 8.

The city of Tijuana was buzzing with the presence of arguably the biggest soccer team in Mexico. There was a sold-out crowd at the Estadio Caliente, with 27,333 fans filling the Mictlan. The presence of Club America was huge at the stadium, with the loudness of the America fans rivaling the noise that the home crowd always creates.

In some instances, the roar of “Vamos America” was as loud as the chants by Club Tijuana’s faithful. Both fan bases were heavily invested in the game long before the initial whistle. When the lineups were announced at the Caliente, both teams received praise and profanity. Miguel Herrera went with a 4-3-3 formation for the game, which he now seems to be comfortable with: Gibran Lajud in between the sticks, with Michael Orozco, Damian Perez, Juan Carlos Valenzuela, and Carlos Vargas making up the defense. The three midfielders were Joe Corona, Victor Malcorra, and Guido Rodriguez. Finally, the attacking trio consisted of Paul Arriola, Milton Caraglio and Aviles Hurtado. The lineup was certainly a strong one with everyone but Carlos Vargas being a consistent starter for Miguel Herrera.

Some interesting notes from the starting 11 were the inclusion of 18-year-old Carlos Vargas in the lineup and the inclusions of Paul Arriola and Guido Rodriguez. It was nice to see ‘Piojo’ trust a player like Vargas for a game of this magnitude. It was also nice to see San Diego native, Paul Arriola, in the lineup after three straight matches in all competitions on the bench. It was refreshing to see Guido Rodriguez in the lineup for Miguel Herrera as the Argentine had picked up an injury in last Friday’s game against Pachuca, but it proved not to be serious as he was featured in this game.

The game started off with the true atmosphere of a playoff game with all 27,333 people fully engaged in the encounter. Unfortunately, the quality of the game did not match the atmosphere at the Estadio Caliente, with the game starting off slow. Few opportunities arose for either team early on, with the first clear opportunity falling to Club America in the 17th minute of the match. Michael Arroyo found space on the left-hand side of the Xolos’ penalty area, where he crossed the ball towards Gibran Lajud’s net. The cross turned out to be more of a shot as the strike tested the Xolos’ goalkeeper, with Lajud slapping the ball out of bounds. The 23-year-old goalkeeper proved to be a key figure in the match as he came up big again in the 26th minute of the encounter, blocking a potent strike by America’s Silvio Romero.

Shortly after that vital save by Lajud, the first and only goal of the encounter came in the 28th minute. A beautiful string of passes started with Guido Rodriguez on America’s half of the pitch. The Argentine passed the ball to Paul Arriola, the American then passed the ball to his countryman, Joe Corona, on the right-wing. Corona found Guido Rodriguez in the middle of the pitch. This caused all of Ricardo La Volpe’s defenders to be caught out as they pushed forward. Rodriguez made a perfect pass in between five of Club America’s players and found Paul Arriola, who ended up one-on-one against goalkeeper, Agustin Marchesin. The San Diego native with full composure tucked away the opportunity with ease and made it 1-0 for Club Tijuana.

After the goal, not many opportunities followed in the first half. The match was a hard-fought encounter and the score was 1-0 for the Aztec Canines heading into halftime. Heading into the second half, Ricardo La Volpe made two substitutions. Club America’s head coach brought off veterans Jose Guerrero and Carlos Darwin Quintero and replaced them with youngsters in Carlos Rosel and Gerson Torres. La Volpe was looking for a spark in the team that perhaps these young players could provide.

The game would have a momentum shift as the game would get heated in the second half. Club America captain, Paolo Goltz, would get injured and get rushed off the pitch in the 54th minute of the game. Former Xolos’ player, Javier Guemez, replaced the Argentine defender. Guemez was greeted with several boos by the home fans who still remember that he left Club Tijuana to join Club America a few tournaments ago. The game continued to intensify as the second half progressed. America’s Carlos Rosel received a yellow card in the 56th minute, then Xolos’ Guido Rodriguez was also booked in the 63rd minute. Miguel Herrera made his first substitution in the 71st minute of the match. Milton Caraglio was brought off in attack for Henry Martin.

Before that substitution, Herrera had made a tactical change on the field, switching to a five-man defense, Paul Arriola now comprising part of it. ‘Piojo’ had done this before and it came as no surprise that the Mexican manager wanted to play it safe, conserving the Xolos’ 1-0 lead. The atmosphere at the Mictlan was intense with both fan bases showing support for their respective teams. In some instances the Club America fan base outshined the border city side’s support.

‘Las Aguilas’ seemed desperate to level the score, trying everything to break past Miguel Herrera’s rigid defense. In the 74th minute, Silvio Romero found space for the ‘Azulcremas’, but his shot was blocked by 18-year-old, Carlos Vargas. Next, in the 75th minute, on the corner kick of the deflected shot, Pablo Aguilar almost tied it up with a header. But his strike fell wide of Gibran Lajud’s net, which the Mexico City side could not surpass. 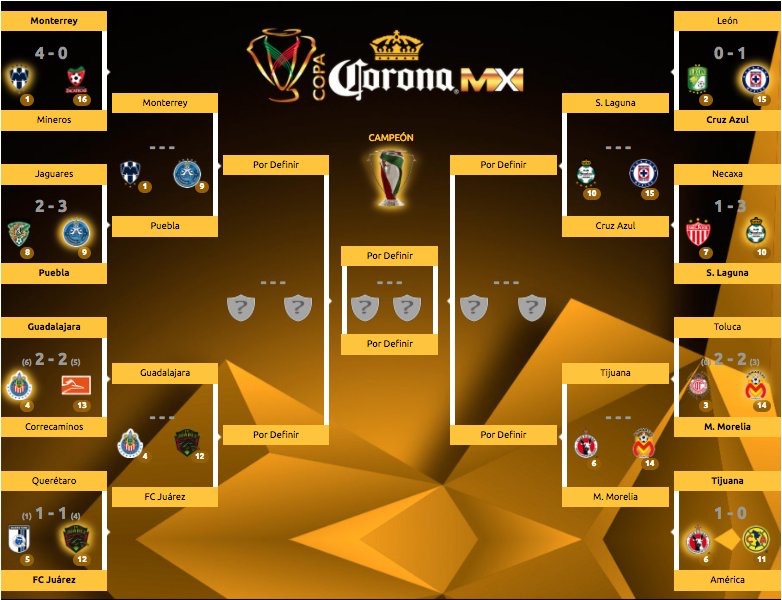 Ricardo La Volpe and his players looked frustrated. In the 79th minute of the match, things would go from bad to worse for Club America. Javier Guemez attempted to go for the ball, but ended up hitting Guido Rodriguez in the process. The foul was clearly not intentional, which Miguel Herrera even mentioned in his post-game press conference. The referee clearly did not see it that way and gave a direct red card to Guemez, leaving Club America with 10 men on the pitch.

Guido Rodriguez had a solid performance against Club America, but he did have a yellow card so ‘Piojo’ opted to sub him out in the 84th minute, replacing him with veteran, Juan Carlos Medina. The game slowed down and the Xolos seemed like the imminent winners of the encounter with only a few minutes left. Club America was still desperately trying to evade the disappointment the team would cause to its fans. In the dying minutes of the match, the fans rejoiced from both fan bases, still with hope. Miguel Herrera made his final substitution in the 90th minute of the encounter, taking out Aviles Hurtado and bringing on another defender in Hiram Munoz. The game was far from over with four minutes of added time.

The final minutes of the match were the most intense, with both teams trying to desperately complete their task. Club America is the team that failed to do so as the final whistle blew and the Xoloitzcuintles won by a score of 1-0 at the Estadio Caliente. There was clear frustration from Club America’s players, which got the worst of them. After the final whistle, Pablo Aguilar rushed towards referee Fernando Hernandez and got in his face and made slight contact with the official. This provoked Hernandez to give a direct red card towards Aguilar, which really caused havoc. A couple of Aguilar’s teammates had to hold the Paraguayan defender down and both Miguel Herrera and Ricardo La Volpe had to calm down Club America’s players. The match ended in a heated manner with Club America’s players showing frustration even after the game, and not many talking to the press.

Miguel Herrera was obviously happy with the result as shown by his comments after the game. Herrera mentioned that the officiating in the game was fair to both sides, which is very uncommon for Herrera to say. Of course, if the Xolos had lost the game this would have been a different story.

The match was a spectacle, as expected. Just the atmosphere at the Estadio Caliente alone was fascinating with the fan bases of each team trying to outdo one another. The Xolos now advance to the quarterfinals of the Copa MX playoffs where the Aztec Canines will host Monarcas Morelia at the Estadio Caliente. Before that, the Xolos will travel to the Estadio Corregidora to face Queretaro in week 10 of the Liga MX. Fuerza Tijuas!

Francisco, 21, Chula Vista area, Journalism student at Southwestern College. I have been a Padres fan all my life, did most of the series previews and recaps in the Padres' 2016 season for EVT. Now I focus more on the Tijuana Xolos soccer team, get press passes for every home game and write consistently about the team for EVT.
Tags: Liga MX, Tijuana Xolos vs Club America, Xolos, Xolos vs America, Xolos vs Club America

Francisco, this is a great article. It made me feel like I was in the stadium. It is shame America was ousted from the competition

I just saw this. I really appreciate the feedback.